We Are Now Living In The “Bizzaro World”

I want to share with you some thoughts that have been plaguing me lately and it involves the new media darling running for President in 2020, Peter Buttigieg who is the mayor of South Bend Indiana.  He is an unashamed sodomite who parades his sodomite partner around referring to him as his husband (that’s hard to type).  He talks about his homosexuality as if it’s perfectly normal and the media doesn’t even blink.  In fact they are now touting Mayor Buttigieg as the number 2 Democrat contender in New Hampshire.   Wow, someone help me here!  This guy is running for the president of the United States!  And to think Bill Clinton had a minor little escapade with a young intern (female of all things) that created a media circus for months and nearly shut down the country in the mid nineties.

Buttigieg justifies himself with the excuse, “if you have a problem with who I am take it up with my creator”.  No Mr. Buttigieg, that’s not how it works.  Like all of us sinners, when it comes time for me to face my Creator we won’t be discussing you and your lifestyle choices.  I will have my hands full reviewing my own issues which are legion.  And I don’t have a problem with who you are.  You come across as a pretty intelligent guy.  But if you plan to guide this nation with clear understanding and sound decisions for America, this moral code of “Do What Thou Wilt” isn’t going to do well by us Deplorables in flyover country.

My brother and I were discussing this situation when he told me that he was recently watching a news channel (probably Fox) where this young politician, was on stage proclaiming his run for the presidency in 2020. Of course it was Peter Buttigieg.  When he finished his speech he walked over to this gentleman (his husband) standing off a ways and planted a sloppy, wet kiss on the lips.  Not fully understanding what he was witnessing my brother had a completely natural and normal reaction of shock, dismay and revulsion.  You know, the same one you have when you see two men kissing on some Netflix program they push in your face at every opportunity.

Now I suppose there are some who would claim such a reaction as being Homophobic.  Well, let’s examine this further.  Webster’s Dictionary says the word “Homophobia” is a condition where one has an: irrational fear of, aversion to, or discrimination against homosexuality or homosexuals. It’s first known use: 1969 (interesting year indeed).  So it seems this condition of Homophobia appears to be a rather new disorder, only 50 years old.  Prior to then it apparently didn’t exist.  You see my friends, what they’ve done here, is taken the perfectly normal human reaction to homosexuality and turned it upside down and backwards.  They’ve tied “irrational fear of” with “an aversion to” along with “discrimination against” and voila, if you do not embrace the Homosexual agenda, you now have a mental disorder.  You suffer from Homophobia and you need to get help soon! 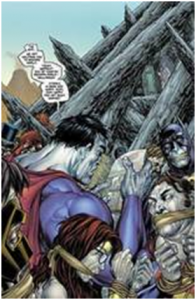 People, we are now living in the “Bizzaro World” from the old Superman Comic book series of the 1960’s.  It was an alternate world where everything is upside down and reversed.  What’s right is wrong and what’s wrong is right.  What’s good is bad, what’s bad is good.  In popular culture, “Bizarro World” has come to mean a situation or setting which is weirdly inverted or opposite to expectations.

I want to tell you my friends, there is no such affliction as Homophobia.  It doesn’t exist.  It’s made up to mess with your mind.  You are not wrong.  The generation of your parents and grandparents didn’t have it wrong.  Your aversion to the practice of Homosexuality is natural and normal.  It is a shameful practice and goes against everything in God’s creation.  These poor young souls who have grown up and have been educated in this inverted, brainwashed culture are screwed unless we intervene.

Keep in mind it was us Deplorables who showed up in the millions, overturning the rigged system that was in place and preventing the criminal Clinton cabal from driving a final stake through the heart of our wounded nation and we’ll show up again in 2020.  So take courage.  Hang on to you treasured values.  Hold fast to the morals you were raised by.  Do not be deceived by this corrupted culture being pushed down your throats and remember, “The Truth” is not fair and balanced.  It is simply “The Truth”.

In the Bizarro world of “Htrae” (Earth spelled backwards), society is ruled by the Bizarro Code which states “Us do opposite of all Earthly things! Us hate beauty! Us love ugliness! Is big crime to make anything perfect on Bizarro World!” In one episode, for example, a salesman is doing a brisk trade selling Bizarro bonds: “Guaranteed to lose money for you”. Later, the mayor appoints Bizarro No. 1 to investigate a crime, “Because you are stupider than the entire Bizarro police force put together”. This is intended and taken as a great compliment.  From Wikipedia