Home/November 2018, Opinions/We Just Sit There And Watch While Our Home Burns

We Just Sit There And Watch While Our Home Burns

“When a ‘forest fire’ is lit, there is no telling which way it will go.  It depends on the ‘wind’, the ‘fuel load’ and the ‘humidity’.  The ‘wind’ is about to blow real hard, the “fuel load” is huge and the humidity is dropping rapidly.  It just takes the right ‘match’, a lightning strike, or spontaneous combustion to set the ‘fire’ in motion.  The question is, what (or who) will set it off?  Could it be health care, an illegal alien invasion, the one-world-order, radical environmentalism, man-caused global warming, the brainwashing of our kids, or trashing the Constitution by politicians and special interest groups?   Was Jefferson right?  Does a society need a revolution every hundred years?  Messy, but could it be necessary if freedom is to be defended and preserved?  If he’s right, we’re long overdue.”  —Ron Ewart

Why in the world do we allow the news media and the Democrats to openly destroy a sitting President by any means, legal or illegal, thereby attempting to repeal everything he has done FOR America?  How many Rush Limbaugh’s, or Sean Hannity’s, or thousands of conservative authors will it take to light the fire of freedom in America?  How bad does government corruption have to get before the people will get angry enough to act in a decisive way?  How many millions of Central and South Americans and terrorists will we let cross our borders illegally before we say enough is enough?  How is it that two high-dense urban counties in Florida can manipulate the vote so that only Democrats win?  Why did we let the Democrats destroy the American Health Care system and do nothing?  How long are we going to sit by and watch the socialist Democrats turn America into a bankrupt Banana Republic before we tell them where to get off in no uncertain terms ….. and mean it, with force if necessary?

That’s right!  We are civilized and we have been trained to be nice, polite and civil.  But how is that working out for us?  Has it stopped the onslaught of a flurry of local, state and federal laws and taxes that continue to “eat” away at our freedom, our liberty, our property rights and our wallet?  Have we reined in government corruption with pleasantries and soft words?  Have DC politicians, the Deep State, or your liberal-controlled state houses, or your city or county councils changed course because conservatives are being civil?  Has being nice changed one liberal-progressive-socialist mind?  Not likely.

Virtually every Conservative knows it.  Their home of the free and the brave is on fire and 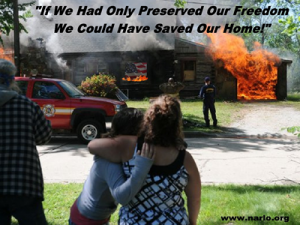 burning down!  We are engaged in a 10-alarm fire but so few seem to care, or don’t know what to do.  Unexplainably, Conservatives haven’t even employed their first line of defense in a fire and that is to engage fully committed “fire fiighters.”  Sure there are token efforts to fight Progressivism going on all across the country, but the token efforts are too small, mostly rudderless and hopelessly underfunded.  Only a massive, nation wide effort has any chance to peacefully undo what Progressives have done to this country while the rest of us watched.  Is our only alternative to peace and freedom, war?

Progressives have been able to fundamentally change America and convert (brainwash) Americans into believing that Progressive/Socialism is the only right way, in spite of Conservative’s somewhat limp opposition to that fundamental change.  It is readily apparent that Conservatives do not have academia and they certainly don’t have the news media in their pockets.  What they might have is enough people to oppose the liberal-progressive agenda, if America is truly a center-right country, as so many have claimed.  However, if those “enough people” cannot come together on their values and principles and vigorously defend them, the liberal-progressive agenda has won.

The depth of anyone’s commitment to change is directly related to their conviction that what they stand for, is right.  The more intransigent is your opponent, the more force you will have to bring to defeat that opponent.  As you increase your force, being nice becomes less and less effective, as history has taught us.  Neville Chamberlain did not stop the Nazis by being nice and Obama didn’t stop Iran or North Korea by being nice, either.  Only the threat of overwhelming force and devastating sanctions have brought Iran and North Korea to the negotiating table.  President Trump has done that, not wishy-washy Obama or the Democrats.

Unless conservative Americans increase their force against the opposition and cease being nice, the other side will not get the message.  Unless conservative Americans realize that they are not going to win by donating pennies to those who are fighting for their freedom on their behalf, the force that freedom groups are able to apply to the problem can only be “limp” at best.  Because not only does the opposition have a large segment of the people, academia and the news media in their pockets, they have billions of our tax dollars to push back against Conservatives, at the executive level, the legislative level and at the judicial level, be it local, state, or federal.

In a war and we are in a war of ideas, ideology and philosophy, when the other side holds most of the “aces”, (and the votes) and they do, the opposing side had better resort to the winning tactics of generals who are out numbered, out gunned and out spent.  Being nice is not one of those tactics.

General Washington changed the field of battle by employing guerilla warfare.  The British moaned and groaned that he wasn’t fighting fair.  Tough!  As he was out numbered, he turned to the messages of passion and patriotism to motivate his men.  When he was out spent, he enlisted the help of the enemy of his enemies, France.  Conservative Americans are not in a shooting war ….. yet, but if they do not start resorting to the strategy of winning and cease being nice, they will most certainly lose and so will freedom and liberty.

Three of those principles in the Manifesto are listed here.

As we mentioned in a previous article: If an unwanted guest invaded your home and the unwanted guest demanded that you pay for the unwanted guest’s room, board, education and health care, you could very easily be motivated to expel that invader with violence.  These illegal invaders from Central America and other places around the globe, have invaded our HOME and have demanded we pay for them.  They should be expelled without question, or national sovereignty is meaningless!

This powerful Manifesto would be employed as a set of demands if we ever have to implement “The Encirclement.”

If we don’t PRESERVE our freedom ladies and gentlemen, our HOUSE WILL burn down.  It’s on fire now and the “fire fighters” are drinking coffee and watching television in the firehouse.  On this 100th anniversary celebrating the end of World War 1, think about it.  If we don’t put out the fire soon, all the sacrifices of our men in uniform to preserve “Constitutional Freedom” will have been for naught and European Socialism for America will have won.

It is big American cities that are driving this move towards national socialism for all.  Over 200 years ago Thomas Jefferson wrote that, “When we get piled upon one another in large cities, as in Europe, we shall become as corrupt as Europe.”  Jefferson was unknowingly prophetic and his prophecy is about to come true ….. unless?