Skip to content
Home/May 2019, Opinions/We Will Not Surrender To A Democrat Aristocracy

We Will Not Surrender To A Democrat Aristocracy

Maybe a large percentage of Americans are buying it, but we’re not. We’re not buying the Democrat’s insane Green New Deal, open borders, or its Medicare-for-all, or its abolishing ICE and the Electoral College.  We’re not falling for allowing the prisoners in our prisons to vote.  We’re totally opposed to so many taxes being levied upon the rich that they will take their money and spend it elsewhere, where tax-and-spend leftists like Nancy Pelosi, Chuck Shumer, Bernie Sanders, Elizabeth Warren and AOC, aren’t in power.

We’re aghast at Democrats not only allowing homelessness all over our cities and condoning it, but throwing more money at it, thereby making it even worse.  We’re disgusted with what the Democrats have done to our cities that are now infested with crime, drug addicts and mental health derelicts. 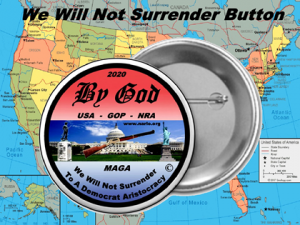 Our women and children aren’t safe any more and law abiding citizens can’t walk down the street without running into muggers, bullets whizzing by, murders, burglary, lone-wolf terrorist attacks, drug deals going down, thousands of needles laying on the sidewalks and in the gutters, and the dredges of society using city streets for bathrooms.  Don’t believe us?  Watch the local TV news channel every night.  It wasn’t like this in the 50’s and 60’s.

We’re not buying national health care (Obama Care) that has seriously deteriorated medical treatment in America and has added greatly to our national debt.

We’re not buying proposed or ratified treaties that dilute, diminish, or extinguish our sovereignty and we are certainly not buying the words of the traitors (Democrats) who promote the one-world-order, over American sovereignty.

We’re also not buying the premeditated brainwashing and indoctrination of our children in public schools and colleges.  We’re not buying never-ending entitlement programs so that liberals can remain in power by buying votes with our tax money from dumbed-down urban Americans; entitlement programs that will, in due time, without any doubt, bankrupt this country.  It’s not “if”, it’s just “when” and the “when” is alarmingly soon, especially if the Democrats take control again.  Social Security and Medicare are already on the brink of bankruptcy and the Social Security lock box is filled with government IOU’s that may never be paid back.

We are sick to death of politicians making law from the wish lists of narrow-focus lobby groups (socialists, environmentalists, corporations, unions, elitists, globalists, etc.) that violate our Federal and State Constitutions.  We are sick to death of environmentalists who have taken over every level of government and lobby their radical agenda on the party of Democrats that aids and abets the lobbyist’s every whim.  We are sick to death of radical environmental protection, SMART GROWTH and SUSTAINABLE DEVELOPMENT policies under UN’s Agenda 21, without due process, much less compensation for the affected.  There isn’t a wetland (no matter how small) that government won’t protect, at the expense of increased taxes, increasing regulation, erosion of property rights and the loss of our individual freedom.  We are sick to death of land use laws that show a reckless disregard of our very foundation of property rights, freedoms and liberties, that were paid for by the blood and treasure of all of our brave men and women in uniform, who are even fighting today for our freedoms.  One could ask, are they fighting for freedoms that now don’t exist?

We are sick to death of some citizens of this land denigrating our war on terror, while our brave men and women in uniform are in harms way and losing their lives, limbs and minds defending our freedoms.  We are sick to death on how the VA shabbily treats our wounded veterans.

Legislators think they know what is best for us, but in almost every case they are wrong, or blatantly self serving.  They constantly violate their oath of office to preserve, protect and defend both the federal and state Constitutions, in passing laws, “for our so-called own good“.   The fact is, we are sick to death of government at all levels, as it is run-amok and out of control.  Government steals our money, it steals our land, it steals our freedom and sells our sovereignty to the moneychangers and the world elite.  Government is only about WHO WIELDS POWER, not what is constitutionally right for its citizens.  Politicians, justices, judges and bureaucrats, (in either party) must revert back to the supreme law of the land, (our Constitutions) or you can kiss what is left of our liberty, goodbye!

We are sick to death of the whole mess that government has created and that Americans have allowed.  We are sick to death of Government’s out-of-control waste, fraud, abuse and corruption.   Yes, President Trump and his devoted followers are making a difference.  But the DEEP STATE and the Democrats may get him anyway.

To register our disgust with where America stands today, we are making available to the public our “We Will Not Surrender to a Democrat Aristocracy” Button.  (shown in the above image) Click on the link to get your button.

In the end, others may be fooled, but we are one group of Americans that WILL NOT SURRENDER to the inevitability of socialism, radical environmentalism and the one world order.  We will fight until there is no fight left in us.  This is a one-of-a-kind, great country and its freedom is worth fighting for.  Would there be man (or woman) among you that will JOIN us in that fight?