Home/April 2018, Opinions/We’re Just Doing A Routine Inspection Of Your Property

We’re Just Doing A Routine Inspection Of Your Property

“There is no crueler tyranny than that which is perpetuated under the shield of law and in the name of justice.”     (Charles de Montesquieu – a French Judge – 1689 to 1755)

It was just after breakfast when Natalie, looking out the front window, saw a man walking through the field in front of their home.  She called out to her husband Ryan to check it out.  Ryan hurriedly pulled on his pants and boots and headed out to the middle of the field where an armed man was making notes in a notebook.  Ryan, with a bit of anger in his voice, called out to the man as he approached yelling, “Hey, what the Hell are you doing on my land.  Didn’t you see our No Trespassing signs at the front gate.”

The man responded, “I’m an agent from the Federal Government and I’m just doing a routine inspection.  My authority is greater than that of your No Trespassing signs and I simply ignored them.”

The man’s flippant response really ticked Ryan off.  “Did you read the sign” he quipped.  “Did 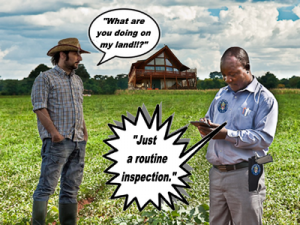 you read the part where it says, ‘Owner(s) refuse to permit any access, search, audit, assessment, or inspection whatsoever of this property without the presentation of a warrant, prepared as prescribed by the 4th and 14th Amendments to the U. S.’ ….. unless you have my written or verbal permission, which you don’t.”  What part of that sign don’t you understand?”

The government agent stopped writing in his notebook, looked up and blurted out: “What’s your name?”  Ryan talked right over the agent’s impertinent question and said, “by what authority do you have the right to trespass on my property?”

The agent, looking annoyed, said, “my right to come on your property any time I wish is authorized by two U. S. Supreme Court decisions in Breard v. Alexander and Florida v. Jardines wherein they state that government agents and law enforcement can come on your property, walk up to your front door and “knock and talk” to you.”  (He’s right.  That’s the law folks if you can believe it.)

Ryan shot back, “Well Mr. government agent, whomever you are, you didn’t come up to my front door and request my permission to trespass on my property, or talk to me, nor did you give me the opportunity to refuse to talk to you under your so-called “knock and talk” authority.  You just unilaterally decided to trespass on my property. Therefore, I am demanding that you leave this property and don’t come back.  If you don’t leave I will swear out a complaint with the county sheriff and the state attorney general and charge you with criminal trespass.  My complaint could make you liable for a $10,000 fine and ten years in jail.  It will also start an investigation into your illegal conduct and you will have to answer to your superiors.  The paper work you will have to fill out will be voluminous.”

Then Ryan pulled out a piece of paper from his pocket that he had been saving for such an event and began to read:

“I know the law too Mr. government agent.  My right to question your authority is embodied in the a legal precedent in Federal Crop Ins. Corp v. Merrill, as follows:  ‘Whatever the form in which the Government functions, anyone entering into an arrangement with the Government takes the risk of having accurately ascertained that he who purports to act for the Government stays within the bounds of his authority.  The scope of this authority may be explicitly defined by Congress or be limited by delegated legislation, properly exercised through the rulemaking power.  And this is so even though an agent may himself be unaware of the limitations of his authority.'”

So before you leave, I have the right, under Public Law 93-579, as Codified under 5 USC Section 552a, to obtain certain information from you:”

“As a free man of the United States of America and the state in which I reside, pursuant to said Public Law, I am authorized to gather the following information:”

“First let me enter today’s date and time of trespass:  (as he wrote on the back of his piece of paper)

What is your full name?

What is your government title?

What government agency do you represent?

What are your office and cell telephone numbers?

What is the physical and mailing addresses of the government building out of which you work?

What is your badge or employee number?

What is the make, model and license number of your vehicle?

Is it a government owned vehicle?

What is the specific purpose for entering my private property without my permission?

What is your Legal authority, including law or statute under which you are operating?”

The government agent reluctantly answered all of Ryan’s questions.

Ryan went on.  “And one more thing.  Note that alleged zoning, land use, or environmental code violations, do not establish constitutional reasons for you entering my property.  Your flippant remark that you are ‘doing a routine inspection’ doesn’t hold water with me, and it tramples all over my rights.  Any and all evidence you gather in your ‘routine inspection’ and used against me for any reason, or in any manner, will be challenged in court as having been gathered under color of law and in violation of my Constitutional rights, potentially triggering the penalties of 18 USC 242 that I listed earlier.  Further, I can sue you under 42 USC 1983.

Ryan continued: “Be aware that this information will be passed on to your superiors and to the local sheriff, as well as the local prosecuting attorney and the state attorney general.”

“Further, I have the right to tape, photograph, or make a video record of this trespass violation, including photographing your vehicle, you and your badge or employee ID numbers.

Ryan puts his pencil and paper in his pocket and said:  “Now that I have gathered the information I am authorized to obtain under said Public Law, I ask that you immediately vacate my property and do not return unless you have secured a legal 4th Amendment criminal warrant, signed by a judge indicating probable cause, along with describing the place to be searched and the persons or things to be seized, photographed, or recorded.  Your ‘routine inspection’ is over.”

In a huff and visibly shaken, the government agent turned and walked towards his car, got into the car and drove away.  He never returned.  Ryan wiped the nervous sweat off his forehead and proceeded back to the house to tell Natalie what happened.   He smiled as he thought on how he just bested an arrogant government agent with the law.  Sadly, most government agents, at every level, think they are the masters instead of the servant and it is up to the people to set them straight, as Ryan just did.

SIDEBAR:  In a recent article entitled, “Can A Sign Revoke Government’s Implied License To Trespass“, we demonstrated how landowners can revoke the “knock and talk” provisions of the two U. S. Supreme Court decisions named above.  We also have a form that a property owner (urban or rural) can use for taking down information about a government intruder.  You can view the form HERE.  Know your rights!

Ladies and gentlemen:  We have reached a point in America where government is now the MASTER of the people and they exercise their power as if they were king.  They invade our property, they collect our private data, they spy on us with three powerful federal agencies, the FBI, the CIA and the NSA, and they continue to pass more laws that bring restrictions to the point of virtual slavery.  We can’t build anything, we can’t say anything and we can’t do anything without obtaining authority, or an expensive license or permit from an alphabet soup of federal, state, or local government agencies.  And we’re supposed to believe that is freedom?

Education Liberty Watch, (ELW) an education watchdog organization, just put out a bulletin on the Family Educational Rights and Privacy Act (FERPA) because under the Act the federal government has the authority to collect and store personal, emotional and psychological data on our school age children.  ELW is demanding that FERPA be re-written to remove this authority.

Dr. Karen Effrem, ELW President, stated: “General education and labor databases should not be collecting and storing sensitive, subjective social, emotional, psychological and behavioral data.  Psychological data related to behavioral, mental health, or special education concerns should be gathered only after informed consent of the parents and treated with the same care and confidentiality as medical data, with appropriate sharing with law enforcement as needed under current statutes. If this had been done in the Parkland situation, that horrific tragedy could have been avoided.”

The U. S. Census, designed by the constitution to only collect just the number of humans, their ages and physical location residing in America for congressional representation purposes, is now being used to data mine some of our most personal data.  Sadly, the American people lie down and roll over when the Census taker comes calling, gushing out their most private information to a total stranger.  One of our readers told us that he provided financial information to a Census taker and found that financial information on the Internet shortly thereafter.  Although the Census bureau claims confidentiality, it just ain’t true.  You cannot trust government with your information, much less your life, property ….. or your freedom.

Social media is collecting all of your on-line data, by the minute and allegedly using it for marketing purposes.  What happens when the government decides to serve a written request or a subpoena on Google, Facebook, or Twitter for all the information they have gathered on you?  Will the private corporation shield your data?  Don’t count on it!

In the name of the “law and justice”, government agents invade your privacy every single day.  They trespass on your land, they collect your private information, they hound you for taxes and they bully you into compliance with threats and intimidation.  Just try to challenge the IRS and you will feel the full weight and power of the federal government on your very soul.  None of this is freedom.  It is nothing more than evolving slavery.

But hey!  Some people like being slaves and take the EASY path.  It’s hard work to be self-reliant and independent ….. and free.

Which are you, FREE MAN or SLAVE?