Were There Giants in the Bible?

I have been casually exploring the whole giant thingee recently in my relentless pursuit of Truth.  My research led me to Steve Quayle and his wonderful website where his deep-dive into this controversial subject really caused me and millions of others to question whether we have been getting the full story on the giants and their relationship to the spiritual world.

It is not a subject that many Believers will mention for fear of ridicule from their peers.  But “upon further review” millions of Christians are being enlightened everyday about the “evil spirits in high places” and what the Bible actually teaches about these dark forces.

My interest was particularly peaked when I saw this article pop up on my internet stream. 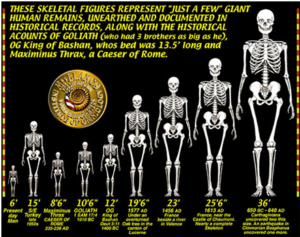 Giants discovered in China I said to myself.  What the heck is that all about?  So, I took the bait and clicked.  It seems that over 5000 skeletons of giants had been unearthed in China.  Of course, who can believe the Chinese…but it prompted me to do a bit more digging.  My friends Steve Quayle and LA Marzulli would be proud of me.

My internet sleuthing led me to a reputable source Answers in Genesis where I found a fascinating article on “Giants in the Bible.”

Like many of you, I had heard of Goliath, and I was told that he had 4 brothers, but I had no idea how prevalent the mention of giants was in the Scriptures.  Allow me to summarize for you the great research done by the folks at AIG and researcher Tim Chafey.  The following references are from Chafey’s work.

Giants are mentioned in the Bible first in Genesis 6. “There were giants in the earth in those days; and also after that, when the sons of God came in unto the daughters of men, and they bare children to them, the same became mighty men which were of old, men of renown.”

They were given names…almost like tribes or kinds…Nephilim, Anakim, Rephaim, Amorites, Emim, and Zuzim.

The Amorites are mentioned more than 80 times in Scripture, and early on, some were allied with Abraham (Genesis 14:13).

The Emim had dwelt there in times past, a people as great and numerous and tall as the Anakim. They were also regarded as giants [Hebrew rephaim], like the Anakim, but the Moabites call them Emim (Deuteronomy 2:10–11).

The Zamzummim (almost certainly the same as Zuzim in Genesis 14:5) were also called giants and listed in the same chapter as the Emim.

The word Nephilim that is translated as “giants” in Genesis 6 is the Hebrew word and many Bible versions simply transliterate it as such. The Nephilim were mentioned again when the spies returned from their exploratory mission of the land of Canaan.

The Anakim were mentioned in several of these passages. They were perhaps the best known of the giants dwelling in the land of Canaan at the time of the Exodus.

Let’s dig deeper.  Here is a list of the 10 biggest giants mentioned in the Bible.  You will find the link here.

There is so much we don’t know about the Bible and there is a great unveiling that is taking place today.  Many believe the Nephilim were the mixed seed of fallen angels and human women.  Because the fallen angels were not human, they were immortal and unable to die.  Hence, they became “disembodied spirits” which today roam the invisible spiritual realm looking for a body to occupy.

“For we wrestle not against flesh and blood but against principalities and powers; evil spirits in high places.”

Could those disembodied spirits be the demons that so many struggle against today?

The Bible tells us that “as it was in the days of Noah, so shall it be at the coming of the Son of Man.”  What was going on in the days of Noah?  Was DNA being messed with?  Could the modern-day transhumanism movement be a replica of what was happening in Noah’s day?

Never forget, the battle was between the “SEED of the serpent and the SEED of the woman.”

Are we seeing a replay of the Days of Noah?  Are the Devil’s disciples messing with the seed (DNA) of the woman once again?

Check out Steve Quayle’s work.  https://www.gen6giants.com/.  We are warned in the Scriptures that “my people are destroyed for a lack of knowledge.”  Sometimes it is not what you know that matters…it is what you don’t know.

Did you know that giants are mentioned all throughout the Bible?  Why not? Does it matter?

What else hasn’t your Pastor taught you?  What else don’t you know?