What If Abortionists Used Guns Instead Of Needles?

Every argument in the world is based on perspective.  That truism is becoming more and more obvious as we journey farther and farther down the rat-hole that has become public debate.  The more divided America becomes the more emotions come in to play.

We used to use the phrase “rational debate” when referring to the dialogue between opposing viewpoints, but today’s discussions are becoming less and less rational and more and more emotion.  Facts no longer matter, especially in an emotional dialogue.  Feelings rule the day and emotional decisions are rarely the best ones.

Heartstrings are more powerful than purse strings…at least until it is time to pay the piper.  Today, where actual money and its value are becoming less and less concrete we often find our hearts writing checks that our checkbook cannot cover.

That is why we find ourselves trillions of dollars in debt.

He who frames the argument wins the debate and the Left has been far more effective in their framing.  Years of government education where male teachers are in the minority we find our children being quite effective at emoting but miserably incapable of thinking with the use of logic.

The key to winning most arguments is to frame the debate in such a way that it brings a greater emotional response which eventually leads to a regrettable decision when eventually viewed under the microscope of logic.

Facts are easy to ignore when emotions are involved.  The more emotional the debate the less the facts matter and the more illogical the solution is.  If conservatives are going to move the needle in the cultural debate we are going to have to become more adept at framing the argument.

One need look no further than the current debate over guns.  We need to tread more carefully so that we do not end up in the trap that the Left has set.  “You are certainly not for seeing young children die in schools are you?”

That isn’t the question.  Of course not…but associating guns with killing is quite a stretch.  There are plenty of ways to kill people.

It is like the word “choice” that the Left uses when trying to hide the fact that abortion kills a baby.  If the “choice” is about a baby’s right to live rather than a woman’s right to abort you will find fewer people in support of a “woman’s right to choose.”

What would be the reaction to abortion if abortionists killed the babies with guns? 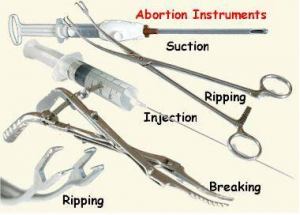 It would be horrific to lose a child regardless of the weapon that was used.  Abortion kills more children than anything else.  What if we outlawed the weapons of mass destruction below?

What if we used videos and actual science to show teenagers what really occurs during an abortion?  We see what guns do to humans perhaps we should show them what Planned Parenthood does to preemie humans. Violence in the womb leads to violence in the world.  We refuse to connect the dots.

Cars kill more children than guns.  So does texting, drinking, vaccines, and meth.  I suggested that Congress take the $500 MILLION given to Planned Parenthood and use it to put armed guards in public schools where they can protect the innocent children from a madman with a gun.  How can you justify the government paying to kill some children while leaving others to be sitting ducks?  What really is the difference between a school shooter and an abortionist?  Both wield their weapons from the holster of a dark heart.

Maybe it would end if we passed a law forcing abortionists to kill the babies with guns.  Maybe then the hypocritical LEFT would stand up and fight for ALL the children.