Home/June 2021, Opinions/What Is The Threshold At Which Self-Government Won’t Work?

What Is The Threshold At Which Self-Government Won’t Work?

“America is the only nation in the world based on an idea – freedom and self-government – so if we don’t understand that idea and what sacrifices were made to win that freedom and keep it for over two centuries, how can we possibly continue to keep it?”  —Eric Metaxas, an American Christian author, speaker, and conservative radio host

The full question is, can a nation of 330,000,000 people having different nationalities and cultures, competing interests and wide divisions in thought and ideology, govern themselves through a series of government representatives that include an executive, legislative and judicial branches of government?  It is becoming increasingly unlikely that “of the people, by the people and for the people” will work in the real world of today.

Thomas Jefferson wrote to William Johnson in 1823 that, “Man is a rational animal, endowed by nature with rights, and with an innate sense of justice; and … he can be restrained from wrong and protected in right, by moderate powers, confided to persons of his own choice, and held to their duties by dependence on his own will.” 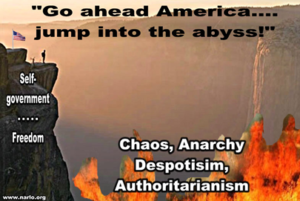 But the fact is, what we are witnessing today, man is no longer rational, being blinded by the lust for power and money.  His restraints against the people from doing right or wrong are hardly moderate powers.  Those governmental powers have instead become, by slow operations, dictatorial, authoritarian and despotic.

Federal government powers have far exceeded the seventeen (17) enumerated powers required by Article 1, Section 8 of the U. S. Constitution.  They have essentially usurped states rights as contained in the 9th and 10th Amendments.  The so-called “We The People” have become slaves and serfs to centralized government despotism once more, in the classic case of history repeating itself.

They exploited a virus to increase their dictatorial control over us and suspended our rights under our Constitution.  They locked us up in our homes and shut down our businesses and forced us to wear masks that did little to stop the spread of the virus.  There is powerful evidence that they funded the research that created the virus in the first place by sending money to a dangerous adversary that was doing the research, China.

They have eroded property rights to the point of being meaningless under land use, zoning and environmental regulations and the never-ratified policy of UN’s Agenda 21.

They have opened up our borders, putting our national sovereignty, national security and national health at grave risk and burdening the American taxpayer to the tune of billions of dollars for the millions of illegal aliens entering America illegally each year.  Sure, we’re a rich nation but why should we be rewarding people with taxpayer paid benefits that blatantly break our laws?

They have weaponized our law enforcement agencies in the DOJ and the FBI, our intelligence-gathering agencies like the CIA, the secret FISA court and the tax collection agencies like the IRS, against American citizens.  There is some compelling evidence that the FBI was a co-conspirator of the mostly peaceful occupation of the Capitol Building on January 6th.

They force admirals to force navy men to listen to racial mush in the name of social justice and equity, dividing the navy men by race and accusing all white navy men as White Supremacists.  The racial mush came from a required-reading book written by a black racial nut case, in just another version of Critical Race Theory.  A navy, divided by race?   Who thinks up this craziness?  If our armed services are not colorblind, wars could be lost.

They have converted our public education system into social justice indoctrination centers instead of institutions of objective learning.

They have divided us into warring factions of race, gender, religion, creed and ethnicity.

They have destroyed the economics 101 principle of sound fiscal policy and spent America into oblivion ….. once again, to buy votes in the pursuit of absolute power.  They have made this generation and future generations debt slaves to an exponentially rising national debt.

They have allowed crime to spiral out of control in our major cities under the Marxist ideology of Black Lives Matter and de-funding the police.

They are pursuing the fraud of Climate Change and forcing Americans to pay trillions of dollars to fix a naturally occurring weather event over which we have little to no control, by using outright lies and propaganda.  Their science has been corrupted and is nothing more than research in search of a predetermined outcome and a flawed basis for their propaganda.  (See: “Climate”)

They are trying to take away our major source of energy that drives our lives, economy and prosperity and shoving very expensive, inefficient, intermittent alternative energy down our throats.

They have shaped our foreign policy around the failed strategy of appeasement, where our enemies laugh at our weakness and lack of resolve.

But worse than all this, the people have stood by in apathy and disinterest and let it happen.  Instead, the people have become addicted to the alleged personal “pleasures” of high tech, drugs, alcohol, cheap entertainment and debauchery. in a replay of the biblical cities of Sodom and Gomorrah.

Who is this “they” we are talking about?  The “they” is primarily the Progressive, socialist, elitist Democrat Party, aided and abetted by academia, the news media and the all-powerful social media.  The alleged conservatives have had a hand in the destruction as well, always in the name of politics, not principle.  But the socialist Democrats are open and blatant about their goals and intentions.

It could be that we could govern ourselves if there weren’t so many forces trying to divide us, in their quest for absolute political power.  We have been cast into a sea of “get the other guy” and class warfare, together with religious, race, gender and ethnic hatred.

We as people and as a nation are losing our honor, integrity and honesty that were the hallmark of our Judeo-Christian heritage.  A nation without honor will not survive.  It will eventually descend into chaos, corruption and a cultural breakdown.  Some say we are already there.

Our values of right and wrong have become dangerously distorted.   Up is down, right is left and sanity has morphed into inexplicable insanity.  We have become a nation embroiled in anger and frustration, not life, liberty and happiness.

Given what has transpired in the last 100 years to America’s values and our freedom and power structure, one might ask if multi-culturalism can actually work.  Ro Khanna, an American politician, lawyer, and academic serving as the U.S. Representative from California  wrote, “The challenge for America is: can we become a multicultural, multiracial democracy?  It would be historic. It would be America’s greatest contribution to human civilization.“  The question is, is peaceful multi-culturalism attainable in a widely diverse population?

The gap between America’s two opposing sides is wide indeed and getting wider.  The Progressive side wants absolute power in the form of an all-powerful centralized federal government, to the exclusion of any other ideology, spelling the death of federalism.  The Conservative side wants to return to the principles of individual freedom as laid out in the Declaration of Independence and the U. S. Constitution.  Until that gap significantly narrows, there will be no reconciliation or “e pluribus unum.”  Right now there is no motivation on either side to come together.

What our current president is doing on so many issues is tearing down our long-standing institutions and culture and dividing us, not unifying us.  Unity in mind, purpose and principle is a fading mirage on a far-off horizon.  (See: “Without Adherence To Principle There Is Chaos”)

So what is the threshold of population before self-government is no longer possible?  Or is there a threshold?  Could it be that “Demographics Will Eventually Destroy our Founding Father’s Republic?”

Look what happened to the 13 colonies where freedom was born.  At least eleven of the 13 colonies have, over time, turned Democrat socialist blue, primarily because socialism more easily gains a foothold in the populations of big cities and there are many big cities in the 13 colonies.  The remaining two colonies aren’t far behind and will eventually turn blue.  The rural areas of these states are predominantly red (conservative) but the rural vote is overwhelmed by the disparity in population from the big cities.

84% of America’s population occupies the big cities.  Is it any wonder that America moves relentlessly towards socialism due to big city populations?  The people get what they vote for and they are getting a boatload of socialism and totalitarianism under the Biden, Harris, Schumer and Pelosi regime.

America is no longer a Constitutional Republic.  It is an aristocracy, run by aristocrats, where power is placed in the hands of a small, privileged ruling class who believe that they know more than anyone else and that gives them the authority to command obedience from the lower classes.  They are not constrained by founding or outdated documents like the U. S. Constitution, which only serves as an impediment to their goals and objectives.  That ruling class is the socialist Democrat Party.

Over 200 years ago, Thomas Jefferson prophetically wrote, “When we get piled upon one another in large cities, as in Europe, we shall become corrupt as in Europe, and go to eating one another as they do there.”

Where are the voices of our Founding Fathers like Thomas Jefferson?  Have they too become victims of our cancel culture used to quash conservative thought and principles?  Are their words out of date, or passé in this fast moving World of high tech, plastic money, mind-altering substances, crushing debt and limitless entertainment?  What can we expect when so many Americans are ignorant about civics and government in general?  A significant percentage of the population can’t even name the current Vice President.

America’s motto is the Latin phrase “e pluribus unum,” meaning “out of many one.”  The phrase appears on all of our currency and the dollar coin.  Although we are “many,” we are hardly “one.”  Can a nation, so divided, “not perish from this earth” as America forsakes freedom and individual liberty and jumps headlong into the “abyss of chaos, anarchy, despotism and authoritarianism?”

What is the threshold at which self-government will not work?  We have already crossed over the threshold.  It remains to be seen whether we can recover.

There might be a glimmer of hope out there as more and more Americans wake up to the realities of a system gone mad and start to push back.  We are seeing some signs of the push back across the country.  Hopefully, it will prove to be enough.