When Are Americans Going to Bury the IRS?

Last week in our article entitled “Save the USA – Abolish the IRS“, we gave compelling arguments on why the IRS should be abolished.  At the same time we launched our new website with the same name.  On the website we announced six different ways in which we would accomplish that task.  Item number 5 in that list of six different ways stated the following: 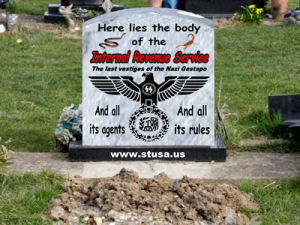 “5. As part of the confusion of the Income Tax Code (Title 26 USC), the question arises on who is “liable” to pay income taxes.  Upon a strict interpretation of the Code, the answer seems to be that the average American citizen is NOT “liable” to pay federal income taxes and yet millions of Americans overlook this conflict and pay their taxes in compliance with what appears to be not required under the Code.

This question has been floating around for a number of years and many credible sources have produced incontrovertible evidence that when the Internal Revenue Code (IRC) is strictly interpreted, the average American citizen does not owe income taxes under that interpretation.  On our new website we produced a portion of the IRC relative to who is “liable” to pay income taxes and we have repeated that information below:

Sec. 5005. Persons liable for tax
(a) General – The distiller or importer of distilled spirits shall be liable for the taxes imposed thereon by section 5001(a)(1)
(b)(1) Liability of persons interested in distilling – Every proprietor or possessor of, and every person in any manner interested in the use of, any still, distilling apparatus, or distillery, shall be jointly and severally liable for the taxes imposed by law on the distilled spirits produced therefrom.

Sec. 5418. Beer imported in bulk
The proprietor of a brewery to which such beer is transferred shall become liable for the tax on the beer withdrawn [etc.]

Sec. 5703. Liability for tax and method of payment
(a) Liability for tax
(1) Original liability – The manufacturer or importer of tobacco products and cigarette papers and tubes shall be liable for the taxes imposed thereon by section 5701 [etc,]

Now if you can find yourself in this list of those persons “liable” to pay income taxes, well then of course, you would owe income taxes.  But if you don’t find yourself in this list, then under the IRC, how can you be “liable” to pay such taxes?  Yes, this is an over simplification but a more detailed description would only send the reader to the refrigerator for a refreshment.

The next issue has been battered about since the passage of the 16th Amendment (1913) in the Pollock and Brushaber U. S. Supreme Court cases regarding whether the income tax authorized by the 16th Amendment, violates the U. S. Constitution requiring that all taxes must be apportioned, “according to the census or enumeration.”  But a new twist has been added to the controversy in a back door interpretation of a U. S. 5th Circuit Court Case (Parker v. Comm’r, 724 F.2d 469 – circa 1984) where by acquiescence, the court agreed with the assertion that “the IRS and the government in general, including the judiciary, mistakenly interpret the sixteenth amendment as allowing a direct tax on property (wages, salaries, commissions, etc.) without apportionment.”  The circuit court panel found itself unable to dispute Parker’s allegation, and ultimately admitted to its accuracy, an astounding and earth-shaking admission.

But these two perplexing and over complicated issues beg the question of why free citizens of a sovereign nation should be exposed to the confusion and conflict running through the 16th Amendment, enabling legislation, Internal Revenue statutes and U. S. Supreme Court decisions with multiple and often opposing interpretations?

Once again ladies and gentlemen, we say that America is no longer a nation of laws but a nation of compliant robots that are enslaved by law, resulting in wholesale slavery through the use of fear, harassment and intimidation from a rogue, out-of-control bureaucratic agency (IRS), within a centralized government that has assumed almost virtual absolute power over every aspect of the lives of every American citizen.  The tool of much of that enslavement is the almost un-decipherable 75,000 pages of the Internal Revenue Service Code.  The second tool was Obama Care.  The government (mostly Democrats) has thrown you in a cage of law and has thrown away the key and then has made you pay for the privilege by having to hire some “expert” to fill out your income tax forms because there is no way you could ever understand the Code.

Of course a nation needs taxes to operate, but the tax collection system must be fair, equitable and easily understandable by the average citizen, without having to hire “experts” to decipher the Code.  And government should go to great efforts to NOT WASTE YOUR MONEY!

What is unfathomable to this author is why a supposed nation of free men and women are so docile when it comes to being run around by the nose by an agency and a government who treats each American as a serf and collateral for the debt they run up to buy votes (Democrats), rather than individuals with individual rights, as we once were.

How can we convince people that only you own your life, your property, your thoughts and your labor and all is sovereign to that which is you.  You are not a pawn that can be battered about at someone else’s will, or a whim, or for entertainment, or for the pure exercise of absolute power.  You are not a slave to the collective, or the elite and you owe nothing to humanity other than which you choose to give, as a free spirit, endowed with free choice.  Your only responsibility is to take care of yourself and those in your charge and to treat others with the same respect and dignity, as you desire to be treated.

It is clear from America’s history that the individual rights guaranteed by our Constitution can be and have been compromised or ignored by our government. A federal judge decreed that as citizens, we must fight for those individual rights if we hope to have any standing against an all-powerful government, as true sovereigns in a free land.  In United States v. Johnson, 76 F. Supp. 538, 539 (D. Pa. 1947), Federal Judge James Alger Fee ruled that…

Pursuant to the Judges decree, as a Belligerent Claimant, we are committed to preserving our rights through FIGHTING and COMBAT if necessary, by resisting every effort by government to subjugate us by law, or by force of arms.  In addition, part of that resistance is setting up a website to work towards ABOLISHING THE IRS.  If you feel that you must be a Belligerent Claimant in order to preserve, protect and defend your individual rights as the judge has decreed, OR, if you wish to no longer comply until government restores the trust in the people and reduces its power to those limits placed upon it by the U. S. Constitution, please join those of us who are doing more than just talking. We’re acting!

If you see no reason to resist government, one day you will find yourself in handcuffs being led away to jail and you will be wondering why.  Or, your kids will be taken away from you.  Or, you will be forced to have an identity RFID chip implanted under your skin, or in your ear lobe, or a number tattooed on your arm.  OR, one day you will wake up to find that you are being forced to buy health insurance by government.

The path to freedom has been and always will be, resistance.  If we lose the will and the courage to question and resist government, then we lose our ability to preserve and maintain freedom.

Where are the fighters who don’t put up with any guff from anyone, including the IRS?  Have we become a nation of sheep being led to the slaughter?  It would appear so.

When ARE Americans going to bury the IRS?  The politicians won’t do it because they created it to manipulate and control every American.  So it is left up to the people.  We have developed an action plan containing six different elements to that end.  It has to start somewhere.  Let it start HERE.    If the people could win just this one war, there would be no stopping them from then on and we would return to the government fearing the people instead of the other way around.

Take the time to explore our efforts and see if you don’t fit into one of those actions to ABOLISH THE IRS ….. unless of course you are led by fear instead of the preservation of individual liberty.

NOTE: The foregoing article represents the opinion of the author and is not necessarily shared by the owners, employees, representatives, or agents of the publisher.