Home/June 2021, Opinions/When Are White Males Going To Walk Out Of CRT Training?

When Are White Males Going To Walk Out Of CRT Training?

“Race is suddenly all the rage.  Employees, students, parents [and corporations] are being inundated with ‘anti-racism’ training programs and school curricula that insist America was built on white supremacy.  Anyone who raises even the slightest objection is often deemed irredeemably racist.  But what if the impetus behind a particular type of race-based training programs and curricula we see spreading at the moment is not exclusively, or even primarily, about skin color?  What if race is just a façade for a particular strain of thought?  What if what stands behind all this is the old, color-blind utopian dream of uniting the ‘workers of the world,’ and eradicating capitalism?  If this all sounds very Marxist, it should.  All the giants in whiteness studies, from Noel Ignatiev, to David Roediger, to their ideological lodestar, W.E.B. Du Bois—who first coined the term ‘whiteness’ to begin with—were Marxist.  In the cases of Ignatiev and Du Bois, they were actual Communist Party members.”  —Mike Gonzalez, American former professional baseball pitcher. 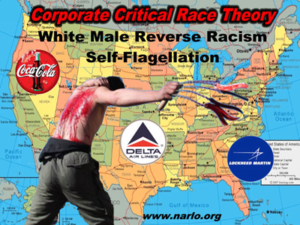 Anyone paying attention knows what Critical Race Theory (CRT) is.  What is baffling is why isn’t it rejected anywhere and everywhere it pops up, like in schools and colleges, corporations, boardrooms and the government bureaucracy?  How did CRT get so embedded in all of our institutions?  Why are millions of Americans going along with it?  Who is behind this treasonous ideology that would rip apart the fabric of our society and whip up dissension between the White and Black races?

It is an absolute travesty that this garbage is being taught in our schools and parents had better rise up and stop it before any more damage is done to the brains of our little ones.

But what is even more alarming is that CRT is now taking place in major corporations throughout America like Lockheed Martin, Coco Cola and Delta Airlines.  CRT is a direct attack on our capitalistic system and free market society and it is based on the false premise of systemic racism.

For three straight days top executives at Lockheed Martin are forced to listen to this bilge as a condition of employment.  They are told that White male “rugged individualism”, “can-do attitude”, “hard work”, “operating from principles” and “striving towards success” are devastating towards minorities (Blacks) and women.   Poor babies.   It would appear from this that minorities (Blacks) and women just aren’t up to the task and are unable to compete.  Whose fault is that, certainly not White males?

Capitalism is a highly competitive system and only the cream of the crop rise to the top.  Yes, nepotism and favoritism are in their somewhere but not on a huge scale.  Capitalism is not always fair, nor is it a perfect system, but it works better than any other economic system.

Nevertheless, socialist Democrats, in the name of equity, want to tear down a good working system and convert it to abject mediocrity so that Blacks and women can compete.  It reeks of affirmative action and pandering to Blacks.  (See: “To Prop Up The Black Race We’re Dumbing Down the White Race”)

But what is more unfathomable is why top executives and lower tier employees of the corporate world and the government bureaucracy take it?  Why don’t White males give the proverbial finger to the CRT class trainer and walk out en masse?   If they did it together, the company couldn’t and wouldn’t fire them.  They would cancel the CRT training sessions.

Are there no men left in America?  Did we train the fight out of them?  Must they prostrate themselves before the almighty God of corporate Marxism and capitulate?  Do they not know that by bowing to corporate pressure they are victims of reverse racism and engaging in their own self-flagellation?

If white males won’t stand up against CRT, why would we think they would stand up against government tyranny and defend freedom?  What happened to the American men that won two world wars?  Have White males become pansies?  Are they the flower children of America, high on drugs with their personal pride and dignity put away wet in a dark closet?

CRT is part of a much larger global plan to subjugate the masses.  The global plan includes breaking down the family structure; drastically changing the English language and the meaning of words for the purpose of confusion; socially brainwashing the children through public schools; making all citizens dependent on government; sanctifying abnormal behavior; demeaning cultural norms; breaking down our religious heritages; allowing criminals to go free and crime to flourish; creating a virtual lawless society; de-funding and demeaning the police; tearing down national sovereignty; the implementation of massive new laws and regulations; censoring all other thought, ideas and ideologies that don’t fit the Progressive-Marxist narrative; increasing the national debt until all current and future citizens are debt slaves or indentured servants and confiscating the citizens wealth through usurious taxes.

Corporate executives have become nothing more than mirror images of their government masters, or is it partners?  This cozy relationship started over 100 years ago with the rise of the Progressive movement.  It is entrenched in all of our institutions.  It is Marxist by act and deed!  It is anti-American on its face and unconstitutional in its content.  So why do Americans tolerate it?

We are Americans.  The blood of heroes and patriots courses through our arteries and veins.  Millions of men and women have paid the ultimate sacrifice and many have been maimed for life so that the rest of us can stand free on a new continent, where freedom was born.

We are the descendants of those whose spine was stiffened by courage when their country called, or evil raised its ugly head.  We are the direct lineage of the men and women whose intellect and fortitude carried them to new heights and made America the greatest, proudest, industrious, creative, productive and most generous nation on Earth.  We are the sons, daughters, grandsons and grand daughters of those who stood up to tyranny, no matter what the cost.  The genes of creators, inventors, hard workers, the educated, the warriors and those in service to others, are an integral part of our DNA and it lies dormant in our being until it is called upon to do good ….. or destroy evil.  And yes, we are “rugged individualists” with a “can-do attitude.”  We believe in “hard work”, “operating from principles” and “striving towards success” no matter whether “minorities (Blacks) or women are devastated.“  These attributes built a free nation never seen before on mother earth.

True Americans are not whiners and they are not losers, no matter what their race or gender.  And that goes for Blacks and women who refuse to accept the “victim” label.  They are doers and winners.  When an obstacle is in front of them they go around it, or under it, or over it, as the situation warrants.  They build things they don’t tear them down.  They invent things to make our lives a little easier, or increase our health and life span, or so that we can get a job done quicker, or yes, even go faster.  Americans are the givers and preservers of life, not the takers of life.  Americans believe that life is precious and a gift from God and its preservation is a prime imperative.

Proud and brave Americans have been the victors in two world wars and the sacrifice of those men and women have lifted over a billion people out of bondage and shown them that freedom is the natural order, not slavery.  Unfortunately, we have engaged in wars of late where victory was not the goal and Americans have paid a high price for our government’s dereliction of duty to those who must fight our wars.  That dereliction is now abundantly evident in our current Commander-in-Chief, who labors over endless detail, political expediency and socialist doctrine, while brave Americans are dying on the front lines of our enemies.  On this Memorial Day we salute all those who were called upon, living or dead, to defend this nation with their lives.

So if this is all true and it is, “When are White Males Going To Reject Reverse Racism and Walk Out Of Corporate and Government CRT Training”, en masse while thumbing their collective middle fingers at the idiots that dream up, teach and promote this insanity.  Americans don’t have to give in to this: “You Caused It, You’re Guilty, Shut Up and Comply!” mentality.