When Over-Educated Idiots and the Racially Insane Govern America

Abraham Lincoln once wrote: “You cannot strengthen the weak by weakening the strong. You cannot help little men by tearing down big men.”  Likewise, you cannot elevate one race by tearing down another race.  But that is exactly what the Democrats are attempting to do with social justice, social equity, critical race theory, systemic racism and white privilege.

Race and racism have exploded everywhere.  The airways and newsprint are filled with race.  Corporations and unions spout racism and equal justice all the time.  Nationwide education has become racist indoctrination, blaming little white kids for the color of their skin, which is classic racism in itself.

Somehow, one or more over-educated idiots decided that math is racist because math requires only one answer to a problem.  So instead of teaching math, the purest form of science, social equity and black inequality are injected into the math lesson plans.  Evidently government has decided that blacks just can’t measure up to whites or Asians in the intellect game so the educators have to lower the standards that will allow blacks to get better grades.  That’s insane and it is no gift to the black race!  In fact, it should be demoralizing and humiliating to all self-respecting blacks. 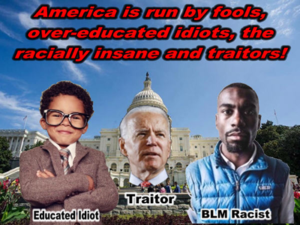 One teacher’s union in San Francisco is demanding that 44 district schools change their names for racial reasons before they will go back to the classroom.  Of course that is “black” mail in its purest form.  Screw the kids.  What do the teacher’s or even the school boards care about your kids?

Our government institutions have become cesspools of endless attacks on white Americans for being racist in order to pander to black Americans.  Democrats in Congress are once again taking up the idea of black reparations ….. for votes.  Let’s see, how much money should a black American receive from white American taxpayers for being descendants of black slaves from 160 years ago, $500, 1,000, or should it be $10,000?  Will reparations make their manufactured racism go away?  Hardly!  They’ll just want more.

Do any white Americans hold slaves now?  No!  Are whites guilty for what their ancestors did?  No!  But just because they are charged for being white racists they are going to have to pay.  If Democrats wanted to create a race war, there is no better way to do it than the race policies and race brainwashing they have established throughout America.

Thanks to President Biden, “Critical Race Theory” indoctrination is once again being forced on white government employees.  White government employees could end this insane, racist attack on white Americans now, by just walking out of the government training classes, en masse.  But being cowards, afraid to stand up for their rights, they won’t do it.  They’ll just cower in their seats and take it.

Black Lives Matter is a Marxist, racist, violent organization that threatens to dismantle the nuclear family, blames all of black troubles on white Americans and white cops.  Somehow, in their minds, that gives them the right to riot, loot and burn anything in their path while the Democrats stand by and applaud.  Your current Vice President stated that the BLM and ANTIFA riots are going to continue well after the election.  She says, “they are not going to let up” virtually sanctioning the riots.

But government-sponsored racism isn’t the only insanity lurking out there to destroy America and Americans at the hands of over-educated idiots and racially obsessed Democrat politicians.  Democrat policies on climate and border security are right up there at the top of what not to do for the American economy, national identity, national sovereignty, national security and our national culture.

Let’s start with the Climate.

The statement by President Biden and his climate Czar, John Kerry, that Climate Change, alias man-caused global warming, is an existential threat to the lives of all humans on this planet, is an outright lie, perpetrated on ignorant populations by government, academia, rabid environmentalists and globalists for a globalist, socialist, environmental agenda.

First, climate science is far from settled and second, there are numerous credible sources that emphatically refute any changes in climate being the result of man’s contributions.  Third, the alleged threat of Climate Change is way down on the list of what Americans are concerned about.  In a recent Gallup poll, (January 2021) Climate Change, the Environment and pollution only registered 2% as a concern.  The economy was at the top of the list.

Nevertheless, Biden and company are going to shove this climate crap down our throats no matter how much we have to suffer or how much we have to pay.  You will get wind and solar power scouring America’s beautiful landscape everywhere.  You will get a reduction in fossil fuel power, including natural gas, a clean energy source, by shutting off any new oil drilling, shutting down pipelines and increasing the costs for all of it.  You will get rolling blackouts or massive power outages as the government and environmentalists try to integrate alternative energy with fossil fuel energy in an attempt to phase out fossil fuels.  Ask a Texan or Californian on how that is working.  What you won’t get is any new clean nuclear or hydro power plants.  Those are no-no’s to environmentalists who seem to rule everything in our lives these days.

To re-join the Paris Climate Agreement, as Biden has done, is a direct attack on the American taxpayer for an alleged problem that has little basis in science.  It is nothing more than wealth re-distribution from rich countries to poor countries while huge CO2 emitters like India and China have no skin in the game and get off scot-free.  The intended results of the Paris Agreement, if realized, are pie-in-the-sky computer model pseudo science with virtually no way to test the accuracy of the predictions.  We just have to wait to see if the so-called computer scientists are right while we sit back and let government empty our pockets for what is nothing more than a globalist, climate racketeering scheme.

If ever there was an Administration that was dead set on destroying the values, principles, the culture and economy of the country it governs, the Biden Administration is the sure winner.  We’ve had bad presidents before on both sides of the aisle but no administration, in all of American history, has made up its mind to “fundamentally transform” America into an alleged socialist utopia and tear down one of the greatest experiments with freedom ever devised in human history.

One specific area of our national identity is whom we allow into our country.  Biden and Company are planning to open our borders and let them ALL in and then grant them amnesty so that they can vote Democrat, potentially all 7 billion of them.  Do they hate Trump so much that they will erase anything he did for pure spite without regard to the consequences?  Or, has Biden, Harris, Schumer and the Democrats gone stark raving mad?    We prefer the latter.  Besides the potential health risks illegal aliens pose, there is the economic, humanitarian, cultural and national security issues that are in peril.  How can anyone be that stupid, or care so little for legal Americans?   (See: “Illegal Aliens Have More Rights Than American Taxpayers”)

Moving on, Biden and his band of socialist brothers are also planning to provide free college tuition and forgive up to $50,000 in student loan debt.  How will that make those feel that sacrificed to pay off their student loan debt the responsible way?  They should be enraged, angry, outraged, infuriated, insulted, mad as Hell and ready to do battle.

There is much more that Biden and the socialist Democrats want to do like making Washington DC and Puerto Rico states, assuring that Republicans will never be in power again.  But the bottom line to all of this is that the Establishment, the deep state, corrupt politicians, over-educated idiots, the racially insane and the arrogant elite are ruling America right into the dust bin of failed republics and it appears nothing can stop them.  Sadly, the American people have allowed it to happen on their watch and they have no one to blame but themselves.

We could add more, but what’s the point.  We haven’t even discussed the cancel culture being exercised by powerful high tech corporations like Google, Facebook and Twitter and how that is aiding and abetting the race war, as well as propping up socialist Democrat politicians and policies.  We could go on about the billionaires like Bill Gates, Tom Steyer and George Soros, all trying to re-shape America into their distorted image.  But again, what’s the point.  Most of you have already heard it.

One of the greatest responsibilities that parents have is to raise their children healthy, well adjusted, mentally happy and objectively educated.  They are shirking that duty on a nationwide scale.   They must not be reviewing their children’s schoolwork to see if it meets the “objectively educated” standard.  We can tell you for sure that it isn’t.  Why aren’t parents reading their children’s textbooks to see what’s in them and attending every school board meeting, demanding a lot more objective education and a lot less racial brainwashing? Why indeed! (See: “Common Core Standards – Suspicions Confirmed”)

All Americans are also responsible to see that politicians and bureaucrats are managing America by adhering to the constitutional mandates (the Supreme Law) that govern this nation.  We can tell you for sure that corrupt politicians and liberal bias-driven bureaucrats are doing everything in their power to tear down that Supreme Law.  Why aren’t Americans flooding state legislatures and Congress with mandates of their own and that is to return America to the Constitutional Republic it was designed to be ….. or else.  Must we follow the path of the apathetic, cowardly German people during the rise of Hitler?   That is where we are heading if we do.  We’re free Americans for God’s sake!  Is it now time to resort to the “Encirclement” to save America?

We’ll close with another Abraham Lincoln quote: “Elections belong to the people. It’s their decision. If they decide to turn their back on the fire and burn their behinds, then they will just have to sit on their blisters.”  If the Democrats are allowed to continue on this doomed path they are taking, there are going to be tens of millions of butt-scarred slaves in America.

We still need help from conservatives with our Trump Medal of Freedom award.