Where Is The Republican Promise To Repeal ObamaCare?

All authority belongs to the people.  —President Thomas Jefferson

If people let government decide which foods they eat and medicines they take, their bodies will soon be in as sorry a state as are the souls of those who live under tyranny.  —President Thomas Jefferson

Experience hath shown that, even under the best forms of government, those entrusted with power have, in time, and by slow operations, perverted it into tyranny.  —President Thomas Jefferson 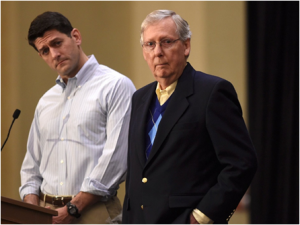 McConnell, Ryan and the rest of the neo-conservative Trotskyite Republicans are doing absolutely nothing to destroy Obamacare.  Prior to their re-elections, they yammered and yammered to us about repealing Obamacare, and now look at them!  Liars all!

If they would get on board with our President’s promises to the American people, they would gain overwhelming support from the American taxpayers and more conservatives would be elected in 2018.  As it stands, they’re playing a losing game.

A while back, I was listening to Dennis Prager while driving, and he was again lauding that not one Republican voted for Obamacare.  The House passed the Senate bill with a 219–212 vote on March 21, 2010, with 34 Democrats and all 178 Republicans voting against it. So, Prager is right about that, but what he doesn’t tell you is that the Republicans could have defunded Obamacare, but did not.  Link  So, the question remains, whose side are the Republicans really on?

Remember the GOP Pledge to America from September of 2010?  Here is a portion:

We offer a plan to repeal and replace the government takeover of health care with common-sense solutions focused on lowering costs and protecting American jobs.  We will enact real medical liability reform; allow Americans to purchase health coverage across state lines; empower small businesses with greater purchasing power; and create new incentives to save for future health needs. We will protect the doctor-patient relationship, and ensure that those with pre-existing conditions gain access to the coverage they need. We will permanently end taxpayer funding of abortion and codify the Hyde Amendment.

How many times have we heard this from these Republican politicians?  And where are we today?  They can’t even come to an agreement to repeal this horrid failing law which has saddled American taxpayers with unbelievably higher health care costs.

And we don’t want a replacement!  How freaking many times do we have to tell them that!

The Affordable Care Act (ACA) actually made care unaffordable for the majority of working Americans, other than the DC politicians of course who still have a Cadillac plan for themselves because they’re exempt from OCare.

How many times have the Republicans voted to repeal Obamacare in full?  The reality is six times. The first time was when Republicans first took the House majority, once after the Supreme Court decision with Justice Roberts calling ACA a tax, and once in the 2014 Congress. And then, the budget every year afterward.  Here is a timeline of the GOPs efforts to kill ACA the first four years of implementation.

There were never enough votes and Obama would have vetoed, and the Republicans knew that. Usually an act is passed by a simple majority, but to override a presidential veto it takes a two-thirds vote of the House and Senate.

Democrats think that is six too many. But it is not 50, or even close to 50. The rest of the votes, actually 54 to 62 so far, were votes that ranged from defunding measures that would have crippled Obamacare to delaying measures that would have put off some of the very same provisions in the law that President Obama had delayed unilaterally, to measures fixing portions of the law that passed both houses of Congress with bipartisan support and were signed by the president.

Obvious all show and no go and the Republicans knew it…just theatre for the masses when elections were imminent.  Now that they own the House, Senate and Executive Branch, they can’t manage to do what they promised and REPEAL OBAMACARE!

The inability of the Republicans to deliver for this President is astonishing and very telling.  Like many of the democrats, the moderate left leaning Republicans wanted another establishment globalist.  This outsider, Donald J. Trump, has disrupted their plans, and as such, they are doing their best to disrupt our President’s promises to the American people. 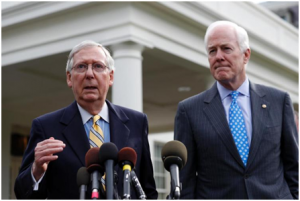 On Lou Dobb’s July 10th show, he played a clip of Mitch McConnell and Sen. John Cornyn (R-TX) standing outside the White House as McConnell offers the customary excuses for failing to perform, how he had hoped to have delivered but, “they’re not quite there.”  He thinks they’ve got a really good chance of getting there, it’s just going to take them “a little bit longer.”

Rick Wells is right when he says, “Nobody can stretch out a defeat into as many nonproductive weeks as Mitch McConnell.”

So, what have they been doing all this time?  Is it that they’re afraid to gut Obama’s signature legacy of unconstitutional government healthcare?

The Cost of Failure

Lou Dobbs actually interviewed Kellyanne Conway two nights in a row regarding the chances of the Senate passing Obamacare revisions…Not Repeal!  He made mincemeat of her because she gave the typical political answers, not the reality about the mess in Congress with these phony right-wingers. It’s only six minutes long… watch it!

Dobbs says, “We have just 3 weeks to get something done, and all I’m hearing and all the American people are seeing is nothing from the House and the Senate leadership to hold the Dems accountable.”  He is absolutely right.  Is McConnell up to the leadership or not?  Dobbs asks, “Or is he another political hack mediocrity sitting in the most important job on Capitol Hill?”

If the Republicans fail to destroy Obamacare after all their talk of repealing it, this will cost them in 2018, and in 2020.  The American taxpayers want and need relief and we want it NOW.

Christopher Jacobs of The Federalist stated, “Buried within the pages of the revised Senate health-care bill are numerous formula tweaks meant to advantage certain states. Call them backroom deals, call them earmarks, call them whatever you like: several provisions were inserted into the bill over the past two weeks with the intent of appealing to certain constituents.”

Lovely, the unconstitutional criminal element in our Senate cannot manage to just repeal a horrible law, they have to tinker with it to get their own special advantages.  Jacobs lists them, and these are only a few: 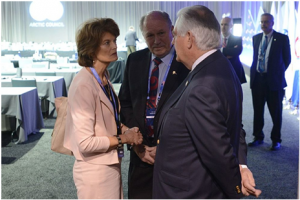 Senator Lisa Murkowski of Alaska has seen to it that unless she gets her disproportionate benefit from the funding formula she will not vote for the bill.  $1.32 billion in Stability Fund dollars is automatically directed to Alaska in Section 106 of the bill.  No other state benefits.  The Alaskan Pipeline in Section 126 also benefits that one state.

Then there’s the Buffalo Bribe that is a New York fiasco to get the Senators to vote for the bill.

Jacobs reminds us that, “The original Senate bill allowed for nearly $200 billion in “candy” to distribute to persuade wayward lawmakers. In both number and dollar amount, the number of “deals” to date may dwarf what’s to come.”

McConnell has already delayed the Senate break for another two weeks as he needs to win more Republican votes, but the worry is that this thing still has the full stench of Obamacare on it.   So far, the sense is there hasn’t been a major overhaul—beyond Obamacare taxes for high-earners being preserved and extra funding for opioid programs, and that stinks.

Then there’s the amendment proposal by Senator Cruz to let insurers sell unregulated plans as long as they offer an Obamacare-compliant plan as well.  What?  Where is the REPEAL in this???

Republican moderates will probably not allow big cuts to Medicaid.  Enough of them opposed the draft bill’s deep Medicaid cuts to kill it. One has to wonder what the Senate has been doing with this Repeal and Replace business.  It doesn’t look good to me and neither does it look good to physician and Senator Rand Paul.  He believes the legislation will boost spending on subsidies and keep some Obamacare taxes, and that’s not what a repeal means.

“We’ve had time to hear what’s going to be in the new bill, and as far as I can tell, the new bill is the same as the old bill except for it leaves in place more taxes, increases taxpayer subsidies to buy insurance, and adds about $70 billion to the insurance bailout superfund.  I don’t see anything in here really remotely resembling repeal. And I’ve said for some time now that the bill has to look more like repeal to get my vote. I can’t support it at this point,” Paul said.

The Senate is only in session half a year, if that, and they think they’re so wonderful for taking another two weeks of their summer break to stay.  How about they stay until they actually repeal this pile of dung, and then they can go home!

Speaker Ryan claims they’re far ahead of schedule.  What a joke.  They can’t actually find a way to truly REPEAL this albatross that hangs around American taxpayers’ necks, but what the hell do they care.  As I stated before, they have their Cadillac luxury healthcare, and none of them retire early.

Speaker Ryan, if you think you’re so far ahead of schedule, where is the legislation on infrastructure, the southern border wall, tax reform, immigration reform, etc. etc. ad nauseam.  Republicans are all “slow like a frog walking,” when it comes to our President’s legislative promises, and this makes it even clearer what side of the aisle they are really on.

It’s up to us to harass them!

Support our President-Contact Congress, tell them to get a backbone and fight!

Republicans are AWOL on standing up for our president who is doing his best to Make America Great Again. Shame on them!

P.S. We not only need to support our President.  We also need to support NewsWithViews and their efforts to bring articles by top researchers and journalists into your home daily.  Please help us keep NWVs alive and well.  You can donate here.