While Good Americans Dither, Rioters Are Taking Over

“Throughout history, it has been the inaction of those who could have acted; the indifference of those who should have known better; the silence of the voice of justice when it mattered most; that has made it possible for evil to triumph.”  —Haile Selassie, Emperor of Ethiopia 1930 – 1974

These Democrat voters are rioting in the streets ….. and good Americans do nothing!

They’re looting our stores ….. and good Americans stand by and do nothing!

They’re burning down our businesses ….. and good Americans watch and do nothing!

They’re murdering our citizens ….. and good Americans look the other way! 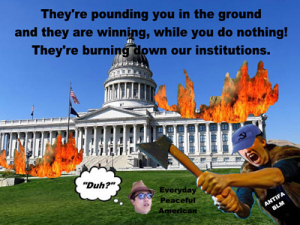 While the police back down from the violence at the orders of their leaders, while the bailers let the criminals go free with no bail, while the prosecutors refuse to prosecute the crimes committed by the rioters ….. good Americans say there is nothing they can do.

The Democrat rioters, looters and arsonists have taken over our public schools and teach socialism, radical environmentalism and critical race theory while poisoning the minds of our children and teaching them to hate America ….. while good Americans do nothing!  Why aren’t good Americans at school board meetings demanding objective teaching in our schools?  Why aren’t parents pouring through textbooks to see what public education is teaching their children and demanding the textbooks be re-written to fit reality and truth.  If the parents started reading textbooks they will be shocked and demand change.  What price a child’s mind?

They have taken over our colleges where free thought, new ideas and thoughtful debate are supposed to be the hallmarks of a good education.  But instead, college deans, boards, professors and staff limit all ideas and all curriculums to only Progressive (socialist) ideas while censoring any other ideas, sometimes with violence.   Meanwhile, good Americans that send their kids to these dens of socialism seem oblivious to the mindset shift to Progressivism that has been taking place before their very eyes, for several generations.  How can public education be any better than the teachers being taught at our liberal colleges?  In fact, where did Common Core State Standards come from but from the graduates of our one-sided liberal colleges?  Who writes the textbooks for public education but those educated idiots that come out of America’s liberal academia?  If only God would spare Americans the utterances and expert advice of over-educated aristocrats of higher education that throw common sense and logic to the far winds.

They’re allowing hordes of illegal aliens to swarm our country, take our jobs and burn up billions of our social service dollars with no consequences ….. and good Americans watch and do nothing.  It turns out that the law only applies to the good people of America.  Criminals, corrupt politicians, bureaucrats and illegal aliens are exempt from the law.  Why aren’t Hillary Clinton and James Comey in jail?  Why do good Americans stand for this injustice?

Many governors and mayors have established sanctuary states and cities to shield illegal aliens from deportation, while ignoring their duty to abide by federal immigrations laws.   Good Americans look the other way and do nothing!

They’re using violence, looting and arson to intimidate and force government jurisdictions into de-funding the police, dismantling ICE and the Border Patrol.  Many Democrat-run states and cities, like Seattle and Minneapolis, are capitulating to the rioters while the good people of America let them get away with it.

During the last several decades almost the entire news media, from print to radio to TV, along with social media has morphed into the mouthpiece for one political party, Democrats.  The objectivity of the fourth estate and the social media giants has all but disappeared and the Journalism Code of Ethics “To Always Tell The Truth” is a cruel joke.  Most Americans obtain the news of the day from print and electronic news sources and social media but the news they are getting is loaded with liberal bias and socialist and radical environmental gobbledygook like Climate Change and the Green New Deal.  There can be no freedom if the people are not properly and accurately informed.  But the people have remained silent as they watched the so-called “free press” disintegrate into the propaganda arm of the socialist Democrats.

The Democrat rioters, looters and arsonists nationalized our health care system under Obama Care.  Good, law-abiding Americans lost their doctors, their health plans and their premiums doubled.  Americans squabbled a little but then looked the other way.  The U. S. Supreme Court decided to declare Obama Care constitutional.  The liberal wing of the high Court legislated from the Bench, with Chief Justice John Robert’s help.  Now the socialist Democrats and the rioters, looters and arsonists want to make matters worse by forcing Medicare For All down our collective throats.  As in all government-run programs, health care costs will go up dramatically, Americans will wait longer for health care and health care services will become mediocre if not substandard.  People will die under Medicare For All while they wait for service, just like the thousands of veterans that have died under another government-run health care system, the Veteran’s Administration.

The rioters, looter and arsonists, thus the Democrats, now own you.  They intimidate and threaten Americans and Americans back down.  The politicians give into the rioter’s radical demands.  The man with no mind, Joe Biden, and a mad, angry, racist black woman, Kamala Harris, are their champions.  Radicalism is their mission.  Subjugation of the masses is their goal.  Globalism and radical environmentalism are their Gods.  They have become and are the “traitor within” that Marcus Tullius Cicero wrote about in his speech to the Roman Senate in 42 BC.  Sure you’ve read it before but it bears repeating.

“A nation can survive its fools and even the ambitious.  But it cannot survive treason from within. An enemy at the gates is less formidable, for he is known and he carries his banners openly against the city.”

“But the traitor moves among those within the gates freely, his sly whispers rustling through all alleys, heard in the very halls of government itself.”

“For the traitor appears no traitor; he speaks in the accents familiar to his victim, and he wears their face and their garments and he appeals to the baseness that lies deep in the hearts of all men.”

“He rots the soul of a nation; he works secretly and unknown in the night to undermine the pillars of a city; he infects the body politic so that it can no longer resist.  A murderer is less to be feared. The traitor is the plague.”

Now, the traitors have come out of the closet and are open and blatant in their demands.  They are “appealing to the baseness that lies deep in the hearts of all men.”  They no longer “wear the face and garments of their victims,” and openly seek their victim’s demise by whatever means.

Democrats and rioters, looter and arsonists are the traitors to American principles of individual freedom and God-given unalienable rights.  They want to replace these principles and values with failed political systems that demand pet-like loyalty and obedience to the oligarchs and aristocrats. They spit on and burn our flag.  They kneel when the national anthem is played.  They demean our motivation for achievement, excellence and a strong work ethic.  They say that America is hopelessly flawed and must be torn down and rebuilt according to the Democrat rioters’ demands.  They turn everything into some form of racism.  They say that all Whites are racists but Blacks are pure as the driven snow.  The news media echoes their voices of evil and treason.  Their weapon to insure loyalty and obedience are propaganda, violence, intimidation, the gun, the sword and the torch, tactics that Hitler employed that resulted in the deaths of over 50,000,000 soldiers, civilians and Jews.

These Democrat rioters, looters and arsonists will not go quietly into the night if we ask them nicely.  They are the bully on the street that only backs down when presented with a greater force.  The people are that greater force, if only they would act in unison against the rioters.

The rioters are the embodiment of evil.   They are the enemy of and traitor to all that is good about America.  Yet good Americans stand by and watch the carnage and destruction without lifting a finger.

A few Americans are standing tall.  The Oath Keepers are in Louisville to hold the Democrat rioters, looters and arsonists at bay.  Armed men and women in Coeur d’alene, Idaho told ANTIFA where to get off.  A young man in Kenosha, Wisconsin, who stood up to the rioters and shot three of them in self-defense, is now facing many years in jail.  A St. Louis couple is facing felony charges for protecting their home with guns, against trespassing rioters.  Both cases charging individuals for defending their life and property are justice turned on its head.

But this is not enough to stop the violent traitors.   It will take the collective outrage of millions of all those “good Americans” if peace will once again be visited open our cities.  Nothing less will stop the Democrat rioters, bullies and traitors.  The ballot box is the first place to start.   Re-elect Donald Trump to a second term.  Demonstrated action against violence by millions of good Americans is the second place.  Organize in large groups and protect your cities, with guns if necessary.  If you don’t, the bullies and traitors win.  The police can’t do it all.

Americans gave birth to freedom, tamed a continent and became the most powerful voice for peace on the planet. None are more generous than Americans, none more creative and industrious. Putting down a few violent nut cases should seem like child’s play, that is of course if Americans haven’t turned to jelly in their bellies.

If evil persists it is because good men and women dithered.