A deranged Muslim, a UK citizen, Salman Abedi, a son of Libyan parents? That’s what the official disclosure is. Wrong. In the same manner that guns don’t kill people, people who use guns kill people, it is also true with monsters like, Salman Abedi. Those creatures like this betrayer, was an instrument of mayhem and mass murder nurtured and used by his Islamist handlers in complicity with the permissive self-serving left and its politicians.

Draining the swamp has become a popular rallying slogan these days in reference to the Washington D.C. cabal of leeches sucking dry the vitality of this nation to feed their own voracious appetite. Good luck with that, Mr. President. The swamp has been around for a long time and shows the promise of not only surviving but even devouring anyone thinking of disturbing it.

And everyone knows that one can’t kill every single mosquito a swamp produces. It is, therefore, draining it the only sure way of eliminating the mosquitoes — the swamp by its very design produces.

Now, mass murderers like this evil Salman Abedi, are the natural products of the swamp called Islam. For as long as this Islam swamp is around, more and more killers are sent forth into the world. There is no realistic way of keeping track of these individual killers of Allah. Even when they are known to the authorities as clear risks — like the child killer Salman — the nihilist, anything-goes left and its politicians defend the rights of these ticking time bombs.

The swamp is the problem. The vested interest exploiters of this muck called Islam are the Saudis, the mullahs of Iran, and a whole host of other beneficiaries that keep supplying it with the murky muck it needs.

Now, one suicide bomber is dead. Yet, unfortunately the ideology and forces that inflict the world with one Salman Abedi are busily producing thousands of other Salman Abedis in Islamic madrasas, mosques, Islamic front organizations such as Council on American-Islamic Relations and even academic institutions with madrasas in places such a Pakistan; mosques preaching hatred of the infidels to the very young; front organizations such as the Brotherhood, academic centers, and so forth. 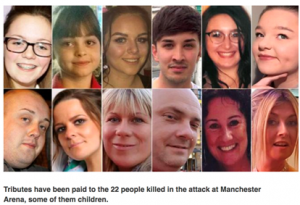 As humans, our two legs move us along, but it is our minds that tell us which path to take in life and what to do. As the mind commands so goes the person. Yet, for humans, the mind does not arrive in this world with a set program of instructions. Contrary to many beliefs, we are born neither as demons nor as angels. Within each one of us is a potential for a demon or an angel. Many evolve into a mix of the two, a few fortunate mature into truly angelic and some become personifications of evil. It is the mind’s program that plays the critical role in making us what we are.

Every one of us arrives in this world as a helpless infant at the mercy of others, not only to be fed, cleaned and protected, but also to be informed about the bewildering life we face. Others can teach the new arrivals only what they know and believe. And much of what adults know and believe is a hodge-podge handed down to them by the adults that raised them.

Islam, from its inception, discovered the crucial secret of getting to the young mind early by adhering to the dictum: Instruction in early childhood is akin to carving in the rock. In the same vein goes the Jesuit saying, “Give me a child until he is seven, and I will give you the man,” derived from the philosophy and theology of Saint Augustine. The immense importance of getting early to the young mind is also emphasized by non-religious doctrines as diverse as the Freudian psychoanalytic theory and Watsonian Behaviorist psychology.

It is thus that millions of infants annually end up in the care of people who themselves are imbued with a pathological Islamist belief system rooted in the mores and practices of the primitives of the Arabian Peninsula.

From very early on, the young child is indoctrinated in the belief that there is an omniscient, ever-vigilant Allah who observes everything a person does and even everything he contemplates. Nothing whatsoever escapes this omnipresent all-knowing being. Allah keeps tabs, bestows incredibly desirous rewards if one behaves as told while dispensing unimaginably tortuous punishment if one strays.

Let’s recall the bold claim of J.B. Watson: “Give me a dozen healthy infants, well-formed, and my own specified world to bring them up in and I’ll guarantee to take any one at random and train him to become any type of specialist I might select – doctor, lawyer, artist, merchant-chief and, yes, even beggar-man and thief, regardless of his talents, penchants, tendencies, abilities, vocations, and race of his ancestors.”

It is foolish to underestimate the dangers of Islamic mental manipulation. All Muslims share an Islamic cognitive repertoire with considerable variations. As is the case with any population distribution, a great majority forms the middle while minorities populate the extremes. Islamic apologists and many Muslims point to the middle as true Islam, thereby disassociating themselves from the two extremes and may even denounce them as not being Muslim.

At one extreme are the nominal Muslims. These Muslims adhere loosely to the Islamic precepts and practices, ordinarily pose little threat to non-Muslims, and may even reject some aspects of the religion.

At the other extreme are the diehard fanatical jihadists who present severe threats not only to non-Muslims but also to the so-called Moderate Muslims as well as the nominal Muslims.

To this extremist group nothing is out of bounds in furthering its cause. Dissimulation, deception, and all manner of violence are their Quran-sanctioned tools. As part of their scheme, this malevolent group has adopted highly effective strategies for subjugating the West, its people and its culture.  In keeping with their supremacist racist cult, their god, Allah is proclaimed as the greatest god—Allah-o-Akbar. Yet, in English, one hears only the deceptive translation—God is great, and not the actual Arabic—Allah is the greatest.

In short, it’s best to put Islam, the very spawning swamp of the deadly virus that makes for jihadists, out of business. This Islam swamp, billed as the one and only true religion of Allah must be exposed for what it is and stamped out. The left and its permissive Islam apologists are complicit in the most recent crime of mass murder in Manchester.