Google and Facebook allegedly illegally collaborated to corner the Internet’s ad markets – and made BILLIONS.

Facebook and Google are finally facing lawsuits for their egregious censorship, and are also in hot water for alleged illegal partnerships that netted the Big Tech giants billions of dollars.

“Australian officials are pushing back against the totalitarian grip of Big Tech. {Go Deep} As a result of investigations into Google and Facebook the Australian government is set to establish fines against tech companies for anti-trust violations.  However, some officials are now discussing taking actions that are beyond civil lawsuits, and are now advocating for arrest of company officers for unlawful conduct.”

So Australia is taking action against Big Tech.  Facebook decided to take action as well.  Facebook announced that they are BLOCKING all news posts from the ENTIRE country of Australia.  Yes you did read that correctly.  Facebook is censoring an entire countries posts – because Facebook doesn’t like the fact that Australia won’t roll over and take whatever Facebook (and Google) decide to dish out.

“…this means people and news organisations in Australia are now restricted from posting news links and sharing or viewing Australian and international news content on Facebook. Globally, posting and sharing news links from Australian publishers is also restricted. To do this, we are using a combination of technologies to restrict news content and we will have processes to review any content that was inadvertently removed.” 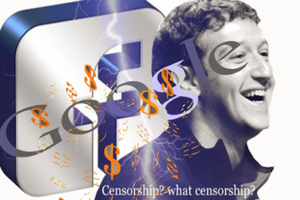 The entire announcement reads like a major snow job – made up B.S. in order to justify slapping an entire country with the usual Facebook “we are above the law” censorship mentality.

I have to ask – how far does Facebook have to go, or Google, before someone, like the U.S. government maybe? – has the stones to step up to the plate and deal with this ridiculous nonsense.  While these Big Tech companies make BILLIONS in ad revenue, they also engage in censorship – while enjoying a protected status (section 230).

“…monopolizing online advertising, arguing it used coercive tactics to seize control of the plumbing that underpins all ad-financed internet content, and illegally divided up the online ad market with Facebook.”

Thirty-eight states also filed suit against Google for allegedly manipulating search results.  Imagine that, like we all don’t know this to be true.  Google is looking to thwart competition, by sites such as Yelp, and other specialized market subsections like mobile search, voice assistants, car search etc.

The Texas case reveals that Google is in control of online advertising, a highly complex and of course lucrative market, after all, practically everyone is online these days.  Think about this for a moment, with the ridiculous COVID lockdowns people were (are) spending a lot of time online.  People are also even with reduced incomes still buying things online including obviously necessities.  Google is raking in the cash from these sales via ad revenue, and so is Facebook.

In particular the complaint reveals:

“…after Facebook bought WhatsApp, which pledged to its users (and the FTC) strict privacy controls, “Facebook signed an exclusive agreement with Google, granting Google access to millions of Americans’ end-to-end encrypted WhatsApp messages, photos, videos, and audio files.” If true, that’s a remarkable set of illegal acts, by both Google and Facebook, as well as a betrayal of their users.

The complaint also asserts Google divided the ad market with Facebook, offering Facebook advantages in buying and selling ads through Google services if Facebook withdrew from head-to-head competition in other markets.”

The Texas case is alleging price-fixing, cartel behavior – prohibited by the Sherman Act and fairly easy to prove.

Apple is also facing a suit via Epic Games concerning their market domination in connection with their app store.

Congress has also made noises about pursuing anti-trust issues with Big tech.  But now with the Democrats in control, I would be surprised if this amounts to much.  Yes the committee looking into this was chaired by a Democrat, but that is only one among many.  If this isn’t in Biden’s cross hairs, it will get buried so fast you won’t have time to enjoy your first cup of coffee.

It will be years until these cases are settled, and in the meantime, Google and Facebook are ripping off other companies, engaging in heavy-handed censorship in any way that they please – all the while raking in BILLIONS of dollars, with some of that money for sure being illegal gains.

Meanwhile, We the People are censored, demonetized, purged, suppressed, removed, ostracized, and doxed.  Of course if you are a liberal, congratulations, you are largely immune to this kind of thing.  All with the blessings of the wonderful Democrats and RINOs who refuse to grow a pair and immediately do something about these dishonest and unscrupulous thieves.