Who Speaks For The Forgotten And Ignored Generation?

“We live in a youth-obsessed culture that is constantly trying to tell us that if we are not young, and we’re not glowing, and we’re not hot, that we don’t matter.  I refuse to let a system or a culture or a distorted view of reality tell me that I don’t matter.  I know that only by owning who and what you are can you start to step into the fullness of life.  Every year should be teaching us all something valuable.  Whether you get the lesson is really up to you.”  —Oprah Winfrey

Back in September of 2013, we penned an article entitled, “What Happens When the Wise Ones Are Gone?”  In the article we wrote:

“After decades of government handouts and the brainwashing and indoctrination of our children in the public school system, the younger generation does not possess the same point of reference on the principles of liberty as do those of us in our 60’s, 70’s and 80’s. There are only a few tens of thousands who remember the trials of the Great Depression and many of us were young children or infants during the Second World War.  Still, the nanny state had not yet intruded into our daily lives, as it has recently.” 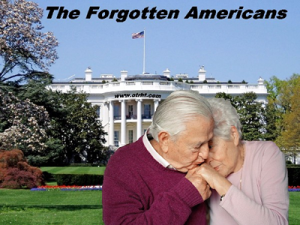 experiences and knowledge and other influences from a variety of sources, gleaned over the years of their lifetime. Sometimes those beliefs and opinions evolve into new beliefs as they accumulate new information. Sometimes the beliefs become firm and fixed no matter what new information comes their way. As a general rule, our political beliefs are heavily influenced by what our parents believe and the actions they took, or are now taking, in furtherance of those beliefs.”  As the population ages and the older generation begins to die off, the general beliefs and opinions of that generation die off with them and those general beliefs and opinions of that generation are replaced by the emerging generation. That is why President Reagan said: ‘Freedom is never more than one generation away from extinction.‘”

The question is, “…. who will be the soldiers to save America, the young, or the old?”  Right now it is the older ones with wisdom that “see” the true realities and have a broad point of reference from which their wisdom springs.  The younger ones aren’t there yet and may never get there at the current rate of government indoctrination, brainwashing, propaganda and “free” handouts.

If you are under 60, most of the following will have no meaning for you.  If you are 65 or older, you will know exactly what we are talking about.

America’s aging population remembers a different kind of freedom than the younger generation believes in today.  But that older generation is dying off.  And as they pass on, they take with them the wisdom of those many years they have lived.  If they have not passed that wisdom onto their children and grandchildren, it is lost forever, except maybe as a footnote in some obscure, yellowing-paged history book, or a personal diary that few ever see.  Who speaks for them?  Who carries on their experiences, knowledge and wisdom?

Sadly, before they pass on, they face the trials of an aging body and mind and it’s no picnic.  The plumbing doesn’t work as good any more.  Their stomachs can’t take a wide variety of foods as they used to.  The ligaments that separate the bones at their joints are almost gone.  Arthritis settles into their bones and joints and they ache, or are extremely sensitive to the touch.  They are now more susceptible to the diseases of aging, such as cancer and heart, lung, bone, blood and nerve disorders.  They have to take more pills to stay alive.  More visits to the doctor or the hospital become a requirement.  Health costs go up.  Social Security and Medicare are on their lips almost every day.  Their bodies slow down, muscle mass turns to fat and they tire easily.  Naps are not a luxury any more they are a necessity.  Mental capacity becomes a factor and memory recall is more difficult.  Kids and grandkids don’t come around as much any more and friends and older relatives are leaving this earth behind.  Spouses die, leaving the surviving spouse lonely, anxious, despondent and many times with declining income.  Instead of going to dances, the older generation is going to funerals.  Life gets more complicated and new technology becomes more of a challenge.

Older Americans wish for the simple days after World War 2 when the clarity of issues was more distinct and less controversial.  There were only two genders.  Marriage was between a man and woman.  Abortions were an abomination to nature and God.  Movies came without swearing, or excessive sex and violence.  Children respected their elders and discipline was an integral part of parenting.

Teachers taught reading, writing and arithmetic, not all this psychological mumbo-gumbo being offered today that confuses children, creates gender identification difficulties and brings them unnecessary anxiety.  Teachers also took no guff from the kids and reasonable discipline was part of teaching.  We remember a shop teacher that kept a wooden paddle with holes in it at his desk.  It was designed for those kids who thought they had more authority than the teacher.  Now, if he paddled a student, he’d go to jail.

During those earlier times, there was no question that freedom, liberty and unalienable rights were defined and codified into law by the U. S. Constitution.  There were three branches of government that were supposed to help keep political corruption from rising.  The bureaucracy new its place and was not an un-elected fourth branch of government with political influence greater than the legislators, or voters.

The news media attempted to be objective when reporting political news.  Academia had yet to become a one size fits all politically correct, ultra-liberal higher education.  Thousands weren’t dying from opioid overdoses and illegal immigrants weren’t streaming across our borders by the hundreds of thousands, if not millions, every year.  There was no terror threat in our cities and there were no TSA inspectors at our airports.  We didn’t even lock our doors.  Many times we left the keys in the car.  Our young girls were safe on the streets.  No one was protesting in the streets to repeal ICE.  Conservatives still had a voice in the main stream.  And just about everyone could understand the words in popular music from crooners like Frank Sinatra, Dean Martin, Perry Como, Bing Crosby, Andy Williams, Tony Bennett, Nat King Cole and Pat Boone.

Is it any wonder that millions of senior citizens are frustrated and fear for their country, a country that has turned away from the principles of freedom, independence and self-reliance and is now headed for cultural and financial destruction at the evil hands of socialism?

Nevertheless, some seniors face advancing age and our deteriorating political climate with as much grace and dignity that they can muster.  They try to eat more healthy foods and exercise as much as they can.  They stay in contact with old friends and work to make new friends.  They get involved with groups and stay mentally and physically active.  In contrast, still others find aging and America’s fast moving pace and rapidly advancing technology a real chore.  Many more fall behind and don’t care.

Older American’s future has been shortened by advancing years and it’s difficult for them to look ahead.  So instead, they tend to sustain themselves and their sanity by looking back at memories of children and grandchildren.  They focus on the good times, not the bad.

Those older memories are the substance of their wisdom and give them a wide variety of issues for conversations with those of the same age.  The worst nightmare senior’s face is a devastating house fire that erases all the evidence of those memories, as is happening in the wildfires all over the West this year.

Unfortunately, new technology is giving millions of seniors a perpetual headache.  They want to be part of the high tech scene and stay in touch with their friends and relatives with photographs, e-mail and “texting,” but slowly reducing mental capacity and unfamiliarity with high tech terms and processes holds them back and raises their anxiety and embarrassment.   Many seniors simply shrug it off and say, “it’s not for me.  Who needs it anyway?”

But what if older Americans had a resource they could go to that would help them not only with high tech, but would allow them to share and preserve those older memories, through pictures and stories?  What if there was a venue to which “Old Timers” could find information on aging, end of life, self-healing, medical miracles, social security and Medicare?  What if there was a place they could post a story of a lost loved one?  What if older American veterans could share their experiences they had in war, or even special peacetime stories?  What if seniors could receive a monthly newsletter filled with information that is 100% relevant to those over 65 …..without all the advertising that comes in some senior magazines?

Who speaks for our senior citizens?  Who carries on their experiences, memories, knowledge and wisdom?  We do in a simple to use, easy to read, large-print website entitled, “Old Timer’s Resisting High Tech.”  (click on the link)  If you are an “Old Timer” that has had difficulty adapting to all the new electronic devices, or just wants to share those memories and photographs of your life, we encourage you to log onto our website.  It was created by an “octogenarian” (over 80) with you in mind by someone who knows and has experienced what you are going through.  This is your website to use for your own enrichment, even if you ARE a senior wiz at high tech.  If you like it, share it with your older friends and relatives.  If you are under 65, share our website with your parents or grandparents.  They will be glad you did.

It is often said that life is short but when you are over 65, life is even shorter.  Fill it with as much positive information, experiences, education and good memories that you can.  In your case, time is truly of the essence.