Why Do Conservative Authors and Radio Hosts Waste Their Time?

“When you create Hope in people, you create expectations. When you do not fulfill those expectations, when the change becomes more of the same old, same old, the Hope that was created can only turn to anger, frustration and bitter disappointment”. Vermin Supreme, American performance artist, politician and activist

How do you change a prevailing mindset where over half the population is deeply convinced that what they believe is the absolute truth?  We have republished a colloquial response we received to one of our articles back during the Obama presidential race in 2008, from a person who holds those beliefs.  He’s not alone.  We believe this person is representative of millions of socialist Democrat Americans. 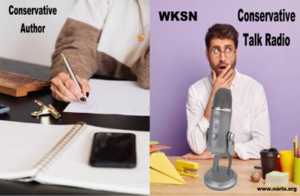 “Sir: You are a complete and utter imbecile! Barack Obama is NOT a “fraud and a phony!” In fact he is probably the best thing ever to happen to America, the greatest president in US history and the man who has saved America from near destruction at the hands of the GOP, the imbecile George W. Bush and the de facto former president, the monstrously evil Dick Cheney, who makes Benedict Arnold look like a saint!

“Donald ‘Chump’ is a crude, vulgar, loud-mouthed POS who has no more business being president than Kim Kardashian.”

“He is a lousy businessman whose businesses have consistently gone bankrupt. Anyone who thinks he would be a good president is an idiot!   Not one of the GOP candidates is even remotely fit to be president and each one would be absolutely catastrophic for this country and the world!”

“Hillary Clinton is America’s only hope – we cannot afford to elect another GOP imbecile president next year.”

“You are more full of it than all the sewers of the world combined!   The GOP has been hijacked by the Christian lunatics of the religious right and has become the most evil, corrupt and dangerous organization on the planet. Who needs Iran, the Taliban, Al Qaeda and ISIS to destroy America now that we have our own Christian Taliban in our own back yard?    Wake up, dude!”

No conservative author or radio talk show host is going to change this person’s mind and yet this person, with his vote, along with millions of other like-minded persons that believes the way he does, can determine the direction that America is headed.  That downward direction became a reality with the election of Joe Biden as president on November 3rd, 2020.

Since President Johnson’s Great Society in 1963 and probably many years before, conservatives have been battling this false ideology that has taken hold in America since the birth of the Progressive movement in the late 1800’s.  We have allowed it to become embedded in all of our laws and institutions.  Even corporate America has joined with Progressives and has become advocates and mouthpieces for the Progressive movement.  Americans have seen and had to endure the degradation of American culture, sovereignty and national pride at the hands of mostly big-city Democrats.

For 32 years Rush Limbaugh plied the airways and was the undisputed voice of the conservative movement on talk radio.  In spite of his efforts the socialist Democrats grew and kept coming.

Mike Gallagher, Michael Savage, Glenn Beck, Tucker Carlson, Mark Levin and Sean Hannity (and others too many to list here) all echoed the conservative ideology, but the socialist Democrats grew and kept coming.

Thousands of conservative authors (including this author) have shared their thoughts and ideas in on-line magazines, newspapers and blogs all across the Internet and in major publications.  Many of them are excellent writers and capable of creating cogent articles with solid ideas and facts to back them up.  Nevertheless, the socialist Democrats grew and kept coming.

How do you compete against a political force that uses your money to buy off a good chunk of the population for their votes?  That has been the socialist Democrat battle plan to hold onto political power for at least the last 100 years.  People are weak and will fall for the “free” money every time, not realizing that their freedom was being bought as well.  Right now, there are jobs a plenty, but people won’t go back to work because the government is paying them a tax-free living wage to do nothing but sit on their couches, watch TV and munch on snack food.

Albert Einstein once said that, “doing the same thing over and over again expecting different results” is the very definition of insanity.

So why do conservative authors and radio talk show hosts “do the same thing over and over again, year after year, expecting different results” while the socialist Democrats grow and keep coming.  It is inescapable. Demographics work against conservatives.  (See: “Demographics Will Eventually Destroy Our Founding Father’s Republic”)

Most of the “fundamental transformation” described and implemented by President Obama came as a result of big cities.

During the industrial revolution, as industries started sprouting up around big cities that provided the labor to keep those industries thriving and alive, people started moving off of the farms and headed for the big cities, where jobs were available and eking out a living was not quite as problematic.  But for all actions, there are usually unintended consequences and such it was as city populations grew.

Sometimes the jobs would dry up as the industrial revolution evolved and technology, markets and fortunes ebbed and flowed.   Sometimes large segments of the city populations would be out of work when a large manufacturer closed down.  The Great Depression came along in the late 1920’s and large percentages of city populations could not find a job.  City folk had no way to produce the food, clothing and shelter they needed to survive.  In contrast, their country cousins could grow what they needed, had a roof over their heads and could live off of the land, no matter how primitive it might be.  If they had a little extra, they would help out their neighbors, who by circumstances may have been a little less well off.  Civility and mutual respect were the rural landowner’s creed and still is for the most part today.

Not so in big cities.  The fact is, a hungry belly has nothing to lose by petitioning (or protesting) their government for a handout and civility is the last thing on their minds.  Where else can they go but the government?  If people are hungry enough, or are beset by perceived injustices, they have nothing to lose by resorting to violence.    The government was all-too-willing to provide that handout and thus socialism was born and socialism is where we are today because way too many people live in big cities and are incapable of helping themselves when times get tough.

Big cities are largely socialist strongholds, run by socialist Democrats.  Big city votes drive and determine the outcome of any election, whether presidential election or mid term. Big city voters keep electing the same big-city Democrats year, after year, after year.  Chuck Shumer has been in Congress for 22 years.  Nancy Pelosi has been there for 33 years.  This is true for Republicans as well.  Too many serve for far too long and the country suffers for it.

In 2020 big-city population was 83% of the total population that largely vote Democrat.  The illegal aliens that are jumping our borders will vote Democrat in large numbers, if they are granted amnesty.  All the conservative authors and radio talk show hosts in America can’t change that no matter how hard they try.  So why do they try?  Is there not a better way?

In fact, these authors and TV and radio talk show hosts, “Create hope in people and create expectations.  When you do not fulfill those expectations, when the change becomes more of the same old, same old, the hope that was created can only turn to anger, frustration and bitter disappointment.”  And it has.

We receive response after response to our articles from people who have seen their expectations dashed and their hope evaporate.  Most of those responses are from people over 70 who have a much greater perspective of where America was and is headed for, as compared to the less experienced, younger generation.  Watching the Biden Administration rip apart the very fabric of our culture, laws, sovereignty and exposes all of us to national security threats and rampant crime with open borders, adds to their frustration and hopelessness.  Conservatives have no peaceful way to stop it.

Democrats are trying to shove the fraud of climate change and the very costly Green New Deal down our throats.  They even invented a new slang term to describe their lust for social issues to buy even more votes.  The new term is “woke” and its derivation comes from an African-American vernacular dialect.

They are using race and race baiting to divide us.  Critical Race Theory, (CRT) a reverse racism curriculum, is used to poison the next generation in our public schools and colleges and indoctrinate white corporate executives and lower tier corporate and government employees into believing that whites are systemically racist.  (See: “When Are White Males Going To Walk Out of CRT Training”)

Socialist Democrats are using every political trick in the book to make America into a one-party nation, with all other debate censored or quashed.  They have powerful, influential high tech companies, academia and the news media to back them up.  This has led to an unbalanced two-tier justice system.  Absolute power is their goal no matter what method they choose, legal or illegal, to reach that goal.  They have been hugely successful in spite of the conservative authors and TV and radio talk show hosts that have tried to stop them.

If conservative authors and radio and TV talk show hosts can’t convey a message that changes the mindset of millions of Democrat Americans, they are truly wasting their time and preaching to the choir.  We do not mean to demean their efforts, much of it being heroic.  It is just unlikely that they will ever be able to compete with “free stuff” from government.

Our only real hope is that the socialist Democrats will go too far and the shift in the mindset of millions of Americans will flip to conservative principles overnight.  But we don’t recommend that you hold your breath in anticipation of such an event any time soon.