Why Hasn’t IRS Commissioner Koskinen Been Fired Or Impeached?

It has been two years and 10 months since the House Oversight and Government Reform Committee released its 70-page report on the investigation into the IRS illegal targeting of conservative groups.  The investigation started in February 2012 and lasted until June of 2014.  During the investigation there were three IRS Commissioners, ending with Commissioner John Koskinen, who is still in office as we write this article, even though he was found to have provided false testimony to the Committee, along with cover up and obstruction of justice.  From the Committee’s report: 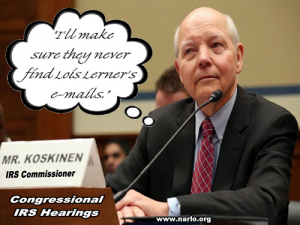 “The Oversight Committee conducted dozens of transcribed interviews with Treasury and IRS staff and determined that the former Director of Tax-Exempt Organizations (EO) at the IRS, Lois Lerner, was the at the center of these efforts to target political groups.  Lerner asserted her Fifth Amendment protection against self-incrimination before the Oversight Committee, declining to answer questions while simultaneously asserting her innocence.”

“Despite the continued obstruction from the IRS and Treasury, the Committee determined that targeting occurred amid increased political pressure from President Obama and Democrats to take action toward 501(c)(4) groups in the wake of the Supreme Court’s ruling in Citizens United v. Federal Election Commission in 2010.  An interim update on the Committee’s investigation documented how the IRS was affected by the heightened political pressure to act.”

“The Committee also found, along with an investigation by TIGTA, (The Inspector General for Tax Administration) clear evidence and testimony that Tea Party and other conservative organizations were targeted for enhanced scrutiny because their organization’s names reflected their conservative beliefs.  Neither TIGTA nor any other investigation has found evidence that a liberal or progressive group was targeted for enhanced scrutiny because its name reflected liberal or progressive beliefs.  The Committee’s investigation has also raised significant questions about the seriousness of the Department of Justice’s efforts to impartially examine the IRS’ wrongdoing.”

Much of the obstruction to the committee’s efforts came directly from the current IRS Commissioner, John Koskinen, an Obama appointee.  No one at the IRS, the Department of Justice, or the Department of the Treasury, or the White House have been held accountable for the IRS targeting, even though records were purged, files were deleted, emails were mysteriously lost and computer servers disappeared, in the face of congressional subpoenas to preserve and supply the records.   Lois Lerner retired from the IRS with a generous pension.  She was never indicted or prosecuted for her involvement in the scandal.

The fact is, the IRS is and was guilty of applying additional rigorous scrutiny and unjustifiable, interminable delays to conservative group applications for tax-exempt status, resulting in our own government betraying the fundamental principles of liberty, free speech and democracy for partisan political reasons and they got away with it.  As a result of there being no punishment for this wrong doing, the IRS is still targeting conservative groups in broad daylight daring anyone to challenge them.

And it is not just conservative groups applying for tax-exempt status that are being harassed, bullied and abused by the IRS.  Millions of individual Americans, who have the misfortune of appearing in the sights of this rogue government agency, have been and are being terrorized by an inept, negligent and out-of-control bureaucracy that has no master.  We were and are one of those misfortunate Americans.

In the last 14 years the IRS has seized, or attempted to seize, our personal assets for taxes and penalties that were and are erroneous.  It started in 2002 when the IRS came after us for over $7,000.00.  That amount was 100% wrong and we prevailed against the IRS.  Then we were charged with an erroneous tax due for Calendar-Year 2009, and then again for C/Y 2010 and then again for C/Y 2011.  We were then forced to challenge an erroneous tax due for C/Y 2013.  Each time we prevailed, except for Calendar-Year 2011, which we are now fighting.  Then, once more the IRS assessed a penalty against our small corporation for a C/Y 2015 violation that didn’t happen.  It was the IRS’s error.  Once again we prevailed.  Just recently the IRS tried to get us to pay a tax due for a tax that had already been collected.

In our last article we told you about receiving a demand notice from the IRS for over $12,000 in taxes due for Calendar-Year 2015 but the tax due was for a lady in California.  The disclosure of taxpayer’s information to an unauthorized third party is a violation of the IRS Code and punishable by a fine of up to $5,000 and five years in prison.  At the IRS, this was just an unfortunate mistake.

You don’t suppose that this harassment and abuse could be because we have been strident conservative critics of the IRS?

Institutional liberalism has been embedded in the IRS and most other government agencies for at least the last six decades.  As a result, the bureaucratic agencies have become an ideologically driven power unto themselves without any oversight, or other higher authority to rein them in.  Some have called this shadow power the “deep state” and it appears to have more power than all executive, legislative and judicial branches of government put together.  But the IRS is the worst of all these agencies because of the power it yields to tax, seize assets, incarcerate alleged violators and intimidate and instill fear in the population.

As a testament to this fact, it is clear that the House Oversight and Government Reform Committee, or the House Ways and Means Committee, or the Inspector General, or the Department of Justice, or the Department of the Treasury did nothing to stop the IRS from targeting conservative groups, or punishing the perpetrators.  John Koskinen is still the IRS Commissioner and if Trump doesn’t fire him, or the Congress doesn’t impeach him, he will still be the IRS Commissioner.

Ladies and gentlemen, if the IRS cannot be stopped by the normal processes of government then nothing can stop them but the people.  Unfortunately, the people are cowed in a corner like a bunch of baby chicks in a chicken house and will not take a stand against this all-powerful bureaucracy.  Millions of Americans just spent billions of hours calculating what they owe the IRS for Calendar-Year 2016 and filing out endless forms, that even the IRS doesn’t understand, to “justify” their calculations.  And we call ourselves free men and women!   Sheep comes to mind.

Congress created this mess but Congress won’t fix it.  Congress can’t rein in any part of government.   What came out of the Fast and Furious investigation?  Nothing and Attorney General Eric Holder and President Barack Obama escaped into the dark cloud of executive privilege.  No one in the government was held accountable for Border Patrol Agent Brian Terry’s death by our government running guns into Mexico.  Sure, they caught the shooters, but who provided the guns to the shooters ….. our government?  Eric Holder was found in Contempt of Congress but nothing came of that either.

Congress also investigated the deaths of ambassador Christopher Stevens and three other brave Americans in Benghazi.  A special Congressional committee was formed to investigate deeper, under the critical eye of Congressman and previous prosecutor Trey Gowdy.  What happened?  Was anyone fired?  Has anyone gone to jail?  No!  Was the investigation thwarted by the State Department and other agencies that knew the facts?  You bet!  Government (the “Deep State”) covers its butt and it is very adept at doing so.  It is not above the law to break the law in the cover up, as happened with the IRS.

And why is former Secretary of State Hillary Clinton still walking around free as a bird when she was caught with a private server in her home that was open to hacking by foreign actors?  She was investigated by the FBI and was found to be negligent but not criminally liable in having classified material on that private server, even though it was a clear violation of federal law.  Which private citizen would be given a free pass if they exposed classified material to unauthorized third parties?  Just ask General Petreaus whose stellar military career was dashed over exposing a few bits and pieces of classified material to his mistress.

But if you are Bill or Hillary Clinton, you are above the law.  Remember the clandestine meeting of former President Bill Clinton and U. S. Attorney Loretta Lynch on the Phoenix airport tarmac just days before the FBI released its report of the Hillary Clinton investigation?  That meeting would have been covered up if it hadn’t been for some curious eyes of the news media.

Congress isn’t the only entity charged with overseeing government.  Each federal agency has an Inspector General to investigate improper or illegal activity within their agency.  When was the last time you heard of a news report where a specific inspector general exposed bad or illegal behavior in their agency?

And what about the news media that is supposed to be the objective watch dog of government for the people.  Dubbed the Fourth Estate, most of the news media has become a co-conspirator and racketeering partner with government.  Most of the news media parroted President Obama’s words when he said, “there wasn’t a smidgeon of evidence of wronging doing at the IRS.”  In other words, Obama lied through his teeth, as did Secretary of State Hillary Clinton over Benghazi and U. S. Attorney General Eric Holder did in the Fast and Furious investigation, as did IRS Commissioner Koskinen when he gave testimony in front of the Congressional oversight committees on the IRS targeting scandal.  What good is government oversight when the overseers have no power, or are incompetent, or are complicit in, or are in bed with the government criminal perpetrators?

Guess who are the winners in this political chess game of government racketeering and criminal skull duggery, the Democrats?  They own the news media.  They own academia.  They own the bureaucracy (the “Deep State”) and they own the plurality of the electorate.  Even though President Trump won the 2016 presidential election, it was a narrow victory and could easily be upset at the next mid-term election.  Democrats won’t be staying home in the 2018 mid terms this time, as they did in 2016 because of having a lousy presidential candidate in Hillary Clinton.

Democrats have and will pull out all the stops to thwart a successful Trump presidency.  They don’t care about what is good for America.  They only care about arriving at perpetual political power by using your money to buy off as many women, moochers, Blacks, Latinos, illegal aliens, Muslim immigrants and LGBT’s as they can for their votes, you know, all those Democrat protected classes of people.  White men are not a Democrat protected class, in a land that allegedly demands equal treatment and protection under the law.

All of what we have described in this article is why “IRS Commissioner Koskinen Hasn’t Been Fired or Impeached.”  It is also why Congress will never abolish the IRS, as we detailed in our article entitled: “Why Congress Will Never Repeal the IRS.”

But we’re not sitting still.  We know government won’t do it, so we are embarking on a bold plan to abolish the IRS.  Stay tuned.  However, if you are having current issues with the IRS, click HERE.

If you LIKED the article, let us know.