Why Is Islam Growing In The US?

The Muslim population is growing, and in the next two decades Muslims could become the second-largest religious group in the United States, according to a Pew Research study.

Well, there are a variety of reasons. For the most part, many Americans do not understand why after the 9/11 attacks, when close to 3,000 Americans died, the percentage of Muslims and their house of prayer, better known as mosques, rapidly increased. There is no question that our own government is the culprit. Ninety-nine percent Muslim, 43,000 Somali refugees were settled in the US under Obama.

Bush told Muslims they belong in America. “America counts millions of Muslims amongst our citizens, and Muslims make an incredibly valuable contribution to our country. Muslims are doctors, lawyers, law professors, members of the military, entrepreneurs, shopkeepers, moms and dads. And they need to be treated with respect. In our anger and emotion, our fellow Americans must treat each other with respect.” 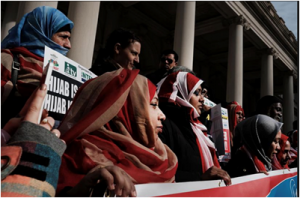 The American people are confused and frustrated. They don’t understand why more Muslims migrate to the United States and why Muslims refuse to assimilate. Why they are creating their own enclaves as they have done in Europe? Here, as in Europe, they have captured town after town, while our own elected officials look the other way in the name of political correctness and the fear of the racist label personally attached to them.

Knowing what we already know about the Islamic ideology and that Muslims are infected with it, why would we even allow one Muslim to move to America? That is criminal. The nature of Islam is based on violence. It not only condones jihad; it recommends it and promises great reward for the jihadist. It is obvious that our elected officials don’t work for us. They work for the highest Muslim bidder. 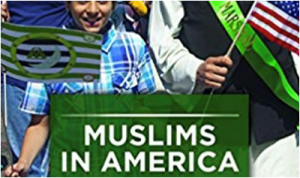 So, it is understandable when they bend over backwards to accommodate and appease Muslim demands such as Halal foods in public restaurants, in public universities, in prisons and elsewhere. Muslim demands are in accordance with Sharia Law. i.e., Muslim cab drivers in Minneapolis refused to let their passengers carry alcohol or pets in their cabs, and claim it is against the Islamic Sharia [laws] and so on. This now occurs more frequently in the United States.

“The Islamic Republic of Iran is our external enemy. Saudi Arabia is our enduring internal enemy, already within our borders and permitted to poison American Muslims with its Wahhabi cult.”

The U.S.-Saudi Arabia relationship goes back decades when both nations mutually benefited from their strong commercial ties. Many Americans are unhappy with this relationship. As history reveals, the Saudis were involved in the 1973 US oil embargo and 9/11 attacks, in which fifteen of the nineteen passenger jet hijackers were Saudi citizens. Meanwhile, our Presidents, one after another keep going back to this Arab state to receive a Gold Medal. Why American Presidents even accept a Gold Medal from the greatest Islamic terrorist country on the planet is something of a mystery.

On top of all that, Saudi citizens are permitted access within the US (so much for the Muslim ban) while they continue to build their mosques and send their radical Imams to guide their followers and preach the Quran, the book of hate. We know these mosques are a breeding ground for radicalization, yet we do nothing to stop it. We just hope they become Americanized. They have no intention of becoming that.

There is not a single church or synagogue in the cradle of Islam, Saudi Arabia, while thousands of mosques dot the tolerant and welcoming non-Muslim lands. Islamic countries that allow for Jewish and Christian places of worship subject these “People of the Book” to numerous subtle and not-so-subtle forms of persecution.

With each passing day, Islamic ideology is making inroads in traditionally non-Muslim lands. Here we must ask ourselves, why Muslim countries do not replicate America’s lenient laws to build churches or synagogues in a non-Christian land? As much as President Trump has a passion for the economic trade deficit, wouldn’t it also be reasonable to commit to the same type of arrangement with Islamic countries in an equitable and comparable trade about churches and mosques?

For now, Saudi Arabia has been given carte blanche in the United States. This scenario has been in motion for the past 40 or so years non-stop. If you were wondering why Islam is growing in the United States and we cannot do anything to stop it, now you know. In addition, the Saudis contribute untold amounts of money to many American universities. They also send radical Wahhabi professors to systematically brainwash American youth. All under the eyes of our elected officials.

In short: America has been heavily infiltrated by radical Muslims and is under Saudi Arabia’s spell. Islam is growing and no one can stop it because our elected officials seem to be in bed with the Saudis and perhaps other Arab Persian Gulf countries as well. If this policy continues, America will eventually lose its sovereignty to a large population of barbarians.