Home/March 2020, Opinions/Will We Allow The ‘Main Stream Media’ To Win?

Will We Allow The ‘Main Stream Media’ To Win?

Mainstream media. That would be ABC, CBS, NBC, MSNBC, CNN, assorted others on the boob tube, electronic and print newspapers and web sites that for many decades have shown their glaring bias against everything America, constitutionalists, conservatives, people of faith and the U.S. Constitution.

That cabal really ramped it up when the criminal imposter ‘president’ Hussein Obama ran for office. They went to Herculean efforts to conceal the truth: Hussein was ineligible to run for president. He was never a legal president under the U.S. Constitution.

You can add FOX News Network on that one as well as every member of the U.S. Congress at the time. ALL gutless cowards simply because Hussein is half black. The media loved him because Obama’s message was to destroy America. Transform it into a totalitarian communist Hell after playing with socialism for a few years.

Along came Donald Trump and their disgraceful duplicity kicked into over drive. Like Trump or not he’s the only president in my lifetime to take on the media. He makes them eat dirt every day. They lie to the American people outright on the nightly news, in their newspapers and on their web sites. Their daily wet dream is to destroy Trump and all he’s trying to accomplish for the American people.

How do they get away with lying on an hourly basis? It’s Legal for the Media to Lie to You

“In February 2003, a Florida Court of Appeals unanimously agreed with an assertion by FOX News that there is no rule against distorting or falsifying the news in the United States. That’s right. It’s legal for the mainstream media to lie to you.

“Back in December of 1996, Jane Akre and her husband, Steve Wilson, were hired by FOX as a part of the Fox “Investigators” team at WTVT in Tampa Bay, Florida.” The network wanted them to continue with a distorted story and were fired for their honesty.

This coronavirus outbreak has reinforced the truth about the phony “mainstream” media. They lie and distort facts. They are gunning for Trump big time as it’s the last hurrah before the November election. They (along with some bottom feeders in the ‘alternative’ media) are guilty for whipping up fear causing hysteria, panic and hoarding.

That stupid media hack demanding Trump stop briefings on what’s being done on the coronoavirus outbreak? How utterly irresponsible can these people be? Medical professionals, individuals and business owners alike need those updates and the MSM wants to shut us out because they hate Donald Trump.

Democrats need to play coronavirus hardball – This Yahoo posting is a complete distortion of actual facts yet the herds out there believe it without doing a lick of research themselves because they hate Trump.

Trump’s Coronavirus Response Will Be His Toxic Legacy – This one is truly reprehensible. “Never forget, Trump played golf as the number of cases surged.” Liberals sit around with their fashionable cocktails to relieve stress (just ask Queen Hillary with her wine glass). Trump doesn’t drink alcohol. The stress Trump is under might kill someone else sitting in the Oval office but Trump is tough. Doesn’t he deserve some down time or should he be at the CDC lab making test kits?

My web site went on line July 4, 1998. At that time there were few “new media” web sites as the home PC was still in its infancy. WND and Drudge were top news providers at the time along with NewsWithViews which also went on line in 1998; I began writing for NWVs in March 2002. Eighteen years ago.

Where would we be today without a true independent media? 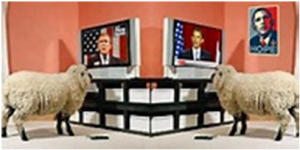 Mr. Super-information highway, Al Gore, thought the Internet would be the ultimate brain washing tool. How the Masters of the Game must have rejoiced to finally have a tool to bombard the American people with the finest in Soviet-style propaganda techniques. Sadly, it’s worked all too well.

There’s only one way to bring down an industry that has so disgraced itself and betrayed the very people who depend on them to provide honest news coverage on any subject. Force them to change their ways or go bankrupt. The only tool is the alternative media.

In a war you don’t give your enemy any advantage if you expect to win. The only thing the MSM cares about is their agenda and $$. They have no integrity, no decency and feel its their mission to carry water for the globalists determined to destroy our sovereign republic by promoting scum bags like Obama, Hildebeast Clinton and that whole crowd.

The alternative media is growing all the time. Many conservative web sites also have broadcasts carried on live TV networks. That helps generate revenues. NWVs doesn’t have that tool although I know it would be great if there was funding.

Like the MSM, the truth media has to function as a business or go off line. Unlike billionaire, Michael Bloomberg, ($69 billion net worth who just gifted the DNC $18 million to help defeat Trump), Paul Walter and his British movie actress Yutte Stensgaard wife depend on reader financial support more than ever. We all know how Google, Twitter, Facebook and other ‘biggies’ have been using their tech power to kill independent media while Congress has done NOTHING to break up those monopolies.

NWVs has consistently over the past 22 years provided outstanding columns getting you the information and research you need and to pass along to others. I’ve seen far too many ‘newbies’ who are in it for a buck or are actually disinformation machines. Sadly, they suck in too many Americans.

Every month or so (if you’re on NWVs free email list) you’ll see a request from me for donations to keep NWVs up and running. Paul and his wife work for free. The writers who give so generously of their time receive no compensation. They do it because they care and love our country. Don’t let NWVs fade into the wind after serving the American people so faithfully for the past 22 years.

Now more than ever it’s imperative America needs NWVs and all the information, data and truth published on that site every day of the year.A site you can count on for honesty, accuracy and integrity.

Is it worth $5, $10, or $25 a month to you? Then sign up for automatic checking account deduction each month just like you would for Netflix or some other service. Paul has never and will never sell your information – unlike many, many web sites including those with a conservative content. Those “sign up for daily email alerts” are worth gold for data harvesters.

Those who are financially blessed set up on-going gifts to charities in their wills. It’s very common for charities. While NWVs is not a charity, you can make a provision in your will to continue keeping independent media alive or the MSM will win and that will be fatal for America.

I believe NWVs has individuals who read their daily columns who are financially blessed. How about making a generous donation today of $500 or more and receive a personally signed copy of my book, Taking Politics Out of Solutions, as a thank you?

However you decide to make a donation, I’m asking you to make it today and if possible, set up the monthly deduction to help Paul in maintaining a budget instead of more stress trying to keep his site up and running. After all, it is for you every day.

There are many ways to financially support NWVs. To contribute please click here.