Skip to content
Home/November 2017, Opinions/With Everyone Bought Off Nothing Can Change

With Everyone Bought Off Nothing Can Change

Is it any wonder that big legislation is almost impossible to pass when so many constituency groups have been bought off?  The only reason Obama Care past is because the Democrats were doing it and because government was increasing benefits, not taking them away.   Any proposed legislation or law that takes away a benefit from some constituency group, like repealing Obama Care, or a Tax Cut, the hue and cry can be heard on the moon.  You can’t repeal Obama Care because over 20,000,000 low-income people piled onto Medicaid with subsidized health care and they might lose those benefits.  The high taxed states like New York, New Jersey and California won’t budge because the new Tax Cut bill removes the state tax deduction.  Some seniors might lose their itemized deductions for health care costs, so they don’t like the proposed Tax Cut bill.

You can’t take away the right of over 700,000 Dreamers (DACA – illegal aliens) to stay in America because Obama gave the right to stay here by an illegal Executive Order.  They will probably end up being given amnesty. We can’t deport illegal aliens because they are being shielded (illegally harbored) by sanctuary states and cities.

We can’t change the curriculum in our public schools because of protests from the teacher’s unions and the textbooks that have been written in socialist, collectivism, multi-cultural, politically correct and one-world-order jargon. 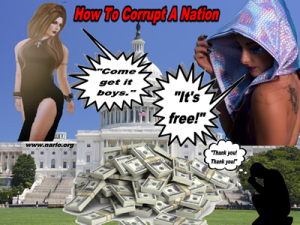 We can’t control our borders, or legal, or illegal immigration because some bleeding-heart liberals take every effort by this Administration to control the borders to their favorite liberal judge who then blocks the effort in federal court, forcing the Administration to go to the U. S. Supreme Court to get their immigration law passed.  It’s nuts!

The laws in America have become so complex, twisted, complicated and corrupted it has become impossible to change any of them without upsetting some group that is benefiting by some law, or a handout.  It’s a catch 22 with no solution because of a hopelessly tangled web of laws and politically powerful constituency groups.  We are sinking in a bottomless quicksand of complexity.

Years ago we had a small company that did business with the military, wherein we installed electronic equipment on military bases.  We would get the bid specifications, submit our bid and then if accepted, wait for the contract that would seal the deal.  The contract would come, consisting of a hundred pages or more and we would read it over as best we could without really knowing its full content and what would happen if there was a breach by either party, or what would happen if we violated one or more of the contingencies that were buried in those pages.  Nevertheless, we signed the contract and proceeded on faith with the work.  We couldn’t afford the lawyers that would be necessary to review the contract to make sure that OUR financial behinds were covered.  We knew that there was no modifying the contract with the military.  It was their way, or we simply didn’t get the work.

One of the great tricks with the lawyers (and law makers) that write these contracts is to bury references to other statutes, or laws, or agreements in the wording.  We could read the contract, but would have no way of obtaining the documents that were referenced in it, without much more work than our little company could afford.  We were not alone in the hidden pitfalls of doing business, either with the government, or very large companies.  Many a business has failed because they violated a provision in a contract of which they were not aware due to the complexity of the contract.

For 241 years politicians and lawyers have been piling law, upon law, upon law to the 17 pages contained in the Supreme Law of the Land, our Constitution.  In the process they were unconstitutionally buying off more and more constituency groups with taxpayer dollars.

On top of the legislation are the millions of court decisions adding to or modifying existing law, including the U. S. Supreme Court case that somehow managed to find Obama Care constitutional.  (Thank you Chief Justice Roberts)  On top of the federal law and court cases are all the laws that are passed by state and local legislatures.  On top of federal, state and local law, comes the “rules” that are promulgated by the ever-growing fourth branch of government, the bureaucracies.  It isn’t negligence or ineptness, it is just plain insane.

Essentially, each new law requires new administration, new employees, increased enforcement and millions more taxpayer dollars.  Government employment continuously grows, exponentially.  By just sheer numbers, the more laws that are written, the less likely the entire population will even know about the laws, or understand them, or know of their consequences or penalties for violation, much less be in compliance with them.  The consequence of too many laws is that huge segments of the public are totally unaware of the laws’ existence.  And yet, under the law, ignorance of the law is not a defense.

Many laws are written at the insistence of lobbying or special interest groups with very narrow and purposely hidden agendas.  In most cases they want more taxpayer money, or a special government benefit that no other group is getting and they will fight like Hell to maintain that benefit, as they are doing now.  The general public never has an opportunity for real input and society as a whole is not benefited.   We have become slaves to the 545 people controlling Washington DC and the special- interest lobbyists that lobby them.  (Total lobbying expenditures in the U. S. in 2016 were $3.5 Billion.  The amount has doubled since the year 2000.  Both political sides lobby.)

Partisan politics often compromises a new law into meaningless, often conflicting legislation, leaving loopholes over which lawyers can argue over for decades.   The House version of the Obama Care bill was well over 2,000 pages containing thousands of references to other laws.  The “rules” to implement Obama Care were over 20,000 pages.  God knows how many pages are in the new Tax Cut bill, or how many pages it will take to implement the new Tax bill.

Each new bill out of the U. S. Congress, all state legislatures and all local governments are so complex that conflict in either the new law or other existing laws, is virtually assured.  Why are they complex?  Because lawyers write them and lawyers get paid very well for interpreting the laws they write and paid even more to “fix” the conflicts.  Further, the laws are purposely complex to keep a naive’ public from knowing what’s in them, much less taking the time to read them.  The people don’t care just as long as those monthly government checks keep rolling in.

America’s salvation as a free country rests, not in complexity, but in simplicity and fewer laws.  Yes, a complex society needs laws to maintain “reasonable” societal order.  But as laws increase, after a certain point, order begins to breakdown under its own weight of the people trying to comply with often conflicting and confusing codes, ordinances, regulations and acts.  As the IRS code has increased over the years because Congress plays “social” games with it, general compliance of the code has decreased.  As a result there is a growing shadow commerce from which no revenue to the government is realized.  Some people are so frustrated they just never file a return, risking huge fines and jail time.

And worse, the more laws there are, the more opportunities for emotionally and financially draining lawsuits between aggrieved parties, egged on by lawyers who make their living off of human weaknesses and interpreting laws that no one else can understand.

But what is worse, government has no money of its own.  It must pay the special interest group with taxpayer money.  Billions of our tax dollars are wasted in this manner.  Billions more are squandered in waste, fraud, abuse and corruption.  We just learned recently that over $15,000,000 of federal taxpayer money has been paid out to settle sexual harassment charges, perpetrated by Congressional politicians or staff.

In the final analysis, extending legislating and law creation to its absurdity, one arrives at a point where there are so many laws that no one is in compliance and we end up losing our ability to fully enforce any of them.  We become in fact, lawless by the very chaos that lawmakers have created.  From lawlessness comes enslavement due to increased enforcement.  If there is a general uprising against the law, government can instantly invoke martial law.  Eventually, from enslavement, comes revolution.

It has now become impossible to create laws that benefit the whole of society because to do so would take away a benefit from some “screaming” constituency group that has been bought off with taxpayer dollars.  That’s is why Repeal and Replace Obama Care went down to defeat.  And that may very well cause the Tax Cut bill to never get out of Congress.

Without exception, every nation who has either ruled by brute force, or ruled by the ever-rising complexity and corruption in their laws, ends in revolution.  There is no reason that history will not repeat itself in America, as we travel down the road towards irrational complexity and dueling constituency and ethnic groups.  Only the combined “will of the people” can stop it.  But with deep divisions in the general population and each constituency group holding onto their turf for dear life, there just is no “will of the people” to change.  Current government, unconstitutional, give-away policies have and are a sure way to CORRUPT A NATION and send it head long into socialism.  We’re there!