Wolff at the Door-Amateurish Book On Trump Tries But Fails

By Rev. Austin Miles|2018-01-16T01:27:41-05:00January 16th, 2018|
This dreadful new book, Fire and Fury by Michael Wolff, was not released–It escaped! The author bragged that this book would “bring down Trump!”
With that goal, especially targeting a legally elected president who has, in his first year, kept every promise he made on the campaign trail, this project would, of necessity, invite lies and misrepresentation with sleazy bogus accusations against President Donald Trump who received over 62 million votes (62,972,226) and 306 electoral college votes (Hillary got only 232) sweeping him into the White House.
The Democrat-Communists who lost the majority vote and the electoral college votes, intend to snatch and grab the government with violence, which they have already demonstrated in their protests which caused numerous injuries and property damage. 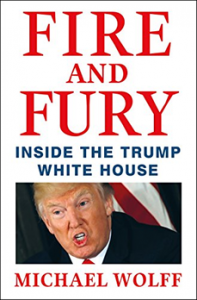