Home/June 2017, Opinions/Yes, There May Be ‘Global Warming’ Coming Even Hotter, But Not For The Reasons You May Think

Yes, There May Be ‘Global Warming’ Coming Even Hotter, But Not For The Reasons You May Think

As long as I’ve knowingly observed the New Age Movement (since 1981), there were sub-goals in addition to their New World Order, New World Religion, and New Age “Messiah”  ones.

Among those subgoals were:

Now in the early days that I first observed the intricacies of the New Age, I found small paperback volumes on the perils of a coming ice age — if we didn’t do exactly as the proponents said we should do.  A few milder winters later, and it was suddenly “global warming.”  And then a few then even colder winters later, it was “climate change.”

Well, I doubt if many of those watchers have bothered to dust off their Bibles, but had they done so, they might have even found some passages supporting their “global warming” theories.  As there are the fewer copyright issues with the King James Version of the Bible, I will quote from it.  One can find very similar language, also, in the Catholic Douay Bibles.

16 And I heard a great voice out of the temple saying to the seven angels, Go your ways, and pour out the vials of the wrath of God upon the earth.

2 And the first went, and poured out his vial upon the earth; and there fell a noisome and grievous sore upon the men which had the mark of the beast, and upon them which worshipped his image.

3 And the second angel poured out his vial upon the sea; and it became as the blood of a dead man: and every living soul died in the sea.

4 And the third angel poured out his vial upon the rivers and fountains of waters; and they became blood.

5 And I heard the angel of the waters say, Thou art righteous, O Lord, which art, and wast, and shalt be, because thou hast judged thus.

6 For they have shed the blood of saints and prophets, and thou hast given them blood to drink; for they are worthy.

7 And I heard another out of the altar say, Even so, Lord God Almighty, true and righteous are thy judgments.

8 And the fourth angel poured out his vial upon the sun; and power was given unto him to scorch men with fire.

9 And men were scorched with great heat, and blasphemed the name of God, which hath power over these plagues: and they repented not to give him glory.

10 And the fifth angel poured out his vial upon the seat of the beast; and his kingdom was full of darkness; and they gnawed their tongues for pain,

11 And blasphemed the God of heaven because of their pains and their sores, and repented not of their deeds.

But BEFORE all of this,  Revelation 14 tells us all are given fair warning:

6 And I saw another angel fly in the midst of heaven, having the everlasting gospel to preach unto them that dwell on the earth, and to every nation, and kindred, and tongue, and people,

7 Saying with a loud voice, Fear God, and give glory to him; for the hour of his judgment is come: and worship him that made heaven, and earth, and the sea, and the fountains of waters.

8 And there followed another angel, saying, Babylon is fallen, is fallen, that great city, because she made all nations drink of the wine of the wrath of her fornication.

9 And the third angel followed them, saying with a loud voice, If any man worship the beast and his image, and receive his mark in his forehead, or in his hand,

11 And the smoke of their torment ascendeth up for ever and ever: and they have no rest day nor night, who worship the beast and his image, and whosoever receiveth the mark of his name.

12 Here is the patience of the saints: here are they that keep the commandments of God, and the faith of Jesus.

It appears that the prophecy warns that we were to fear only the God who created the heaven and earth and the sea and the fountains of waters.

There has been a great deal of speculation as to who and what might be the Beast and  his image.  Having observed the New Age Movement as closely as I have for the past  36 years, I have become increasingly of the opinion that the “image of the Beast” may well be that of the “Whole Earth.”

Indeed, that image was discussed as pivotal in Marilyn Ferguson’s New Age coming out party volume, THE AQUARIAN CONSPIRACY.  Chapter 13 (page 405) of her book is even named “The Whole Earth Conspiracy.”  I found  20 detailed references in the volume to “Whole Earth” concerns.  The New Age contempt for the beliefs and God of our Fathers is richly reflected in her prose:

Those of us born into the “broken-earth” paradigm have two choices: We can go to our graves with the old view, like the generations of die-hard scientists who insisted there were no such things as meteorites, or germs, or brainwaves, or vitamins-or, we can consign our old beliefs unsentimentally to the past and take up the truer, stronger perspective.

Spiritual values, indeed, are at the base of much of the ecological concern in our time, a quickening sense of the whole earth, respect for the matrix of our evolution, the nature in which we are embedded. (Ferguson, page 357) 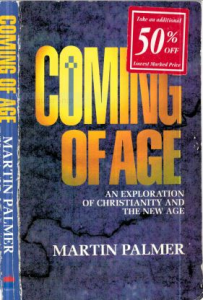 It is not just water conservation, nor air protection that the New Agers seek.  They  also aggressively put forth an “Earth Charter” accompanied by an even more more blasphemous “Ark of the Covenant”.   Interestingly enough, they trotted that out for public display in a Vermont ceremony only two days before the “911” events of September 11, 2001 when the World Trade Center was destroyed.  Al Gore had a large Whole Earth poster behind him often shown on TV as he was interviewed in his Vice-Presidential office during the William Jefferson Clinton presidency (1993-2001).

Big money and big names are associated with the Threshold Foundation.  I have mentioned this organization in earlier posts, in views of Elaine DeWar’s book CLOAK OF GREEN, and histories of the powerful convergences of the New Agers as they were seeking to implement their major tri-fold agenda.  You will remember that it was James George’s book ASKING FOR THE EARTH was largely about the Threshold Foundation, its pioneering conferences and its work.  Marilyn Ferguson said of its goals in THE AQUARIAN CONSPIRACY (p. 410) 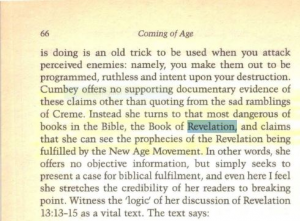 The Threshold Foundation, based in Switzerland, stated its intent to help ease the transition into a planetary culture, “foster a paradigm shift, a new model of the universe in which art, religion, philosophy, and science converge,” and promote a wider understanding that “we exist in a cosmos whose many levels of reality form a single sacred whole.

The book of Revelation is both feared and despised by the New Age/Globalist/Deep Ecology Movement.  Indeed, an important New Ager who has lyingly denied being one, “Sir” Martin Palmer an adviser of note to Britain’s Prince Philip  as well as his boastful claims of heading a trillion dollar environmental fund (churches’ moneys, no less) spent considerable ink faulting me for that in his 1993 book

Well, even a broken clock is right twice a day.  The New Agers and their “environmental movement” compatriots/comrades in arms may well be right about “global warming” coming.  They are, however, dead wrong about its causes.  If they want to prevent “global warming” or a “New Ice Age” as still earlier books of theirs called for, perhaps they might want to give thanks rather than blasphemies to their Maker.