“The ICRC (International Red Cross) did not see Nazi Germany for what it was. Instead, the organization maintained the illusion that the Third Reich was a ‘regular partner,’ a state that occasionally violates laws, not unlike any army during World War II, occasionally using illegal means and methods of warfare.” —Peter Maurer, Swiss diplomat who has been serving as the President of the International Committee of the Red Cross since 1 July 2012

Don’t you get it?  We’ve seen this movie before, 90 years ago, with the rise of the Third Reich.  If you aren’t scared, you damn well should be.  The Red Cross and the Catholic Church all were complicit in looking the other way when it came to the Third Reich, just like corporate America and sports organizations are looking the other way when it comes to the atrocities of the Chinese Communist Party and its goal to dominate the world with military and economic might under a Chinese superpower regime. 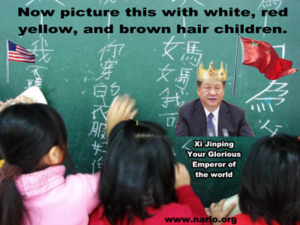 England’s Neville Chamberlain thought he could appease and make nice with the Germans.  He gave in to German demands and left Czechoslovakia helpless against the German war machine.  History told us how that turned out.  Six million European Jews died brutally and needlessly.  Are we not doing the same thing with China?

America won two world wars because it could manufacture the weapons of war very rapidly and had the best war machines and military training in the world.  Even so, Germany and Japan although much smaller, proved to be formidable enemies that took four years to vanquish with a huge loss of life.  America just might lose a war with China.

China, a nation of 1.4 billion people, can also produce weapons of war very rapidly.  They have the natural resources and the manpower to do it, along with the technology they stole from America.  Through admittance to the World Trade Organization and corporate greed, America handed over the keys to the kingdom to China as American corporations exploited cheap Chinese labor.  With all that money and the technology they took from America, they are “buying up” and populating the planet.

In a Department of Defense Report entitled, “Military and Security Developments Involving the People’s Republic of China (2020)” they stated that:

“The PLA’s (People’s Liberation Army) objective is to become a “world-class” military by the end of 2049—a goal first announced by General Secretary Xi Jinping in 2017. Although the CCP has not defined what a “world-class” military means, within the context of the PRC’s national strategy it is likely that Beijing will seek to develop a military by mid-century that is equal to—or in some cases superior to—the U.S. military, or that of any other great power that the PRC views as a threat. As this year’s report details, the PRC has marshalled the resources, technology, and political will over the past two decades to strengthen and modernize the PLA in nearly every respect. Indeed, as this report shows, China is already ahead of the United States in certain areas such as:”

“Shipbuilding: The PRC has the largest navy in the world, with an overall battle force of approximately 350 ships and submarines including over 130 major surface combatants. In comparison, the U.S. Navy’s battle force is approximately 293 ships as of early 2020.”

“More striking than the PLA’s staggering amounts of new military hardware are the recent sweeping efforts taken by CCP leaders that include completely restructuring the PLA into a force better suited for joint operations, improving the PLA’s overall combat readiness, encouraging the PLA to embrace new operational concepts, and expanding the PRC’s overseas military footprint.”

In spite of China’s military and economic threat to America’s superiority, our lame brain president is going all over the world telling everyone that Climate Change is America’s greatest threat.  To add insult to injury President Biden’s budget decreases the amount for military spending and ends the off-budget funding pool for the Overseas Contingency Operations, shrugging off the China threat.

In contrast, China is increasing its footprint around the globe with strategic ports and even a 200 square mile wind farm in Texas, virtually adjacent to Laughlin Air Force Base. How did America let that happen?

It is projecting its military might into the South China Sea and threatening Taiwan almost daily with incursions into Taiwan air and sea space.  It has flagrantly violated the terms of the Hong Kong handover to China and subjected the inhabitants of Hong Kong to over-aggressive, brutal Chinese rule.  Get out of line and you go to jail, or you just disappear.

“China has put more new vessels to sea between 2014 and 2018 than the total number of ships in the German, Indian, Spanish and British navies combined.”  (Source: “Carnegie Endowment For International Peace”)

To this day, China is refusing to allow access to the Wuhan Virus Laboratory for investigators to determine if the Coronavirus was accidentally or purposely unleashed on the planet from the Lab, a lethal virus that has infected close to 180,000,000 people and killed almost 4,000,000.  By now lab scientists have disappeared and most of the evidence of a leak, accidental or purposeful, has long since been destroyed.

None of these revelations consider the possibility of a Russia-China alliance to counter American military might, or the combined threats of China, Russia, Iran and North Korea, should these four countries forge a mutual, military alliance.

General Milley of the Joint Chief’s of Staff just recently testified before Congress that: “China is increasing its military capability at a very serious and sustained rate.  We must ensure that we retain our competitive and technological edge.”

Two world wars using mostly conventional weapons (except in two cases) killed at least 100,000,000 people.  Can you imagine a world war where nuclear weapons are employed?  The death toll would be staggering and it could border on human extinction.

Meanwhile, the President of the United States is trying convince Americans that the fraud of man-caused global warming (See “Climate”) is the world’s greatest threat and coupled with the Green New Deal we have to spend somewhere around 100 Trillion dollars to counter that threat.  That’s not just gross negligence and stupidity.  It is criminally insane.

The President and the Secretary of Defense are shoving this reverse racism Critical Race Theory (CRT), inclusion and equity garbage on the officers and ranks of our military and degrading military readiness in the process.  The military top brass, under the direction of the Secretary of Defense, are purging what they call “White Supremacists” (Trump voters) from the ranks.  There is significant dissension rippling through the services.

Huge American military industrial complex corporations that rake in billions of taxpayer dollars are doing the same thing to their executives and lower-tier employees and making (CRT) a condition of employment.  This is a form of intentional national suicide.  Extreme ruler Xi Zinping and China’s CCP must be literally “laughing” their heads off at America’s obsession with race and social phobia.  (See: “When Are White Males Going To Walk Out of CRT Training?”)

Although the number of Chinese national students in U. S. colleges has fallen sharply because of the pandemic, still in 2019 there were almost 400,000 Chinese nationals enrolled in American colleges.  If just a small percentage of these students were Chinese spies or CCP operatives, they could do a lot of damage to national security before they were detected.  A coordinated effort by a small number of Chinese individuals could interrupt or critically damage our easily accessed energy and food supply infrastructures.  And it wouldn’t have to be by direct physical action to inflict damage.  It could be by internal cyber attacks.  America’s infrastructure is negligently vulnerable to foreign enemy attacks as we outlined in our article entitled: “An RPG, EMP, or Hacker Could Turn Our Lights Off”).  As so many are fond of saying, “when is somebody going to fix it?”

For over 10 years America’s leaders watched as Hitler and Tojo built up their war machines.  Ladies and gentlemen, if America looks the other way again and ignores the ominous threat from China, someday your children will be speaking Mandarin Chinese and once again a megalomaniac will attempt to conquer the peoples of the world and in the process send planet earth back to the stone age where the only survivors, if there are any, will be living in deep underground caves.  The surface of the earth will be too contaminated, with some of the nuclear radiation having half-lives of 24,000 years.

It is more than likely that the only real threat to America are socialist Democrat voters, a President and Vice President and a Democrat Congress that are completely out of touch with reality.  They are purposely sabotaging America’s sovereignty, national and border security, military cohesiveness and readiness, the rule of law, its culture and its foundation for freedom.  There is only one word that describes their actions: TREASON!