Your Conservative Vote Won’t Save America From Socialism!

“As democracy is perfected, the office of president represents, more and more closely, the inner soul of the people.  On some great and glorious day the [socialist Democrat city] folks of the land will reach their heart’s desire at last and the White House will be adorned by a downright [senile, corrupt, socialist] moron.”   – Henry Louis Mencken,  American journalist, essayist, satirist, cultural critic, (1880 – 1956)

SOCIALISM:  “Socialism is the doctrine that man has no right to exist for his own sake, that his life and his work do not belong to him, but belong to society, that the only justification of his existence is his service to society, and that society may dispose of him in any way it pleases for the sake of whatever it deems to be its own tribal, collective good.  The essential characteristic of socialism is the denial of individual property rights; under socialism, the right to property (which is the right of use and disposal) is vested in “society as a whole,” i.e., in the collective, with production and distribution controlled by the state, i.e., by the government.  The results have been a terrifying failure—terrifying, that is, if one’s motive is men’s welfare.  Instead of prosperity, socialism has brought economic paralysis and/or collapse to every country that tried it.  The degree of socialization has been the degree of disaster.”  —Ayn Rand, Russian-American writer and philosopher 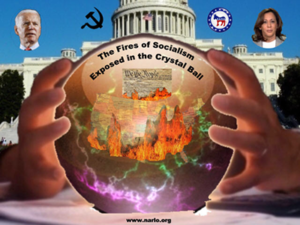 How are the free people of America going to stop the onslaught of socialism, radical environmentalism and the move towards one-world government?  If the brainwashed socialists and the radical environmentalists have the majority vote, or if they cheat to make it appear that they have the majority vote, your conservative vote can’t override their majority vote and their radical agenda prevails.  Unless, the judicial system can expose the cheating and correct the vote, nothing will change.   If those who count the vote are not honorable, the cheating will go on without interruption and the judicial system will be unable to expose or stop it.  At that point all integrity in the American voting system will have been lost and the “good faith and credit” of the American government will have evaporated.  In such event the socialist colluders and racketeers will rule.

Now that America has been fully immersed in socialism, radical environmentalism and the one-world-order for five score and ten, is there any hope of undoing what has been done, when so many American citizens have forsaken freedom and liberty in exchange for the phantom veil of government-provided security and comfort?  How can we turn back the clock to a time when Americans were self-reliant instead of dependent?  How do we return to a time when we took responsibility for our actions instead of being excused for them because someone convinced us that we are victims of society’s ills?  What makes us think we can re-invent the past when the rule of law meant something; or when there were individuals with individual rights; or the justice system administered true justice?  Why did we let America morph into a collective where only the collective has rights?   That IS socialism!

There was a time when we looked to our selves to get out of a scrape, instead of holding our outstretched hands to a nanny government for rescue and salvation.  Our conservative vote is in the minority, subjugated to the will of the now, hopelessly insane majority.

How can we unravel the tangled web of razor wire that is our legal and unjust justice system?  How do we convince lawmakers that what they are doing is sapping the very strength and vitality out of our people by being everything for them and regulating every aspect of their lives, like limiting Thanksgiving and Christmas because of the Coronavirus?

How do we round up and send 13 to 20 million illegal aliens back across the border that they have purposely violated because government and special interests created multiple magnets for them to come here in the first place?  How do we stop the hemorrhaging of our tax dollars to an ever-rising crisis that is illegal immigration?   The new, feckless, socialist president-elect wants to grant them all amnesty and give them free health care.  (See: “Overrun and Overwhelmed by Illegal Aliens and Sanctuary Cities“)

How do we repeal the millions of environmental laws that have made property rights meaningless and have raised the price of everything by several orders of magnitude?  A Biden Administration will only exponentially increase those environmental laws through the Green New Deal and efforts to reduce the alleged results of the fraud of Climate Change using the bureaucratic, rule-making power of the Environmental Protection Agency?  He won’t need the Congress to do that. (See: “Environmentalism – Building Block of Global Government”)

Now that government has taken over our health care, what is to stop them from taking control of our money, our land, our water, our food, our cars, our gas, our roads and our electricity?  Nothing!  They already have!

Did your conservative vote stop all these erosions of our rights under the Constitution?  Of course not!  Did 30 years of Rush Limbaugh spouting the conservative mantra on radio change anything? Unfortunately not!  Progressivism just kept growing and getting stronger and stronger.

It took 156 years from 1620 to 1776 for the colonials to have enough of England and King George III to jump-start their clock forward to freedom and they paid an incalculable price, the greatest price and the greatest sacrifice of all, the giving of one’s life for liberty.  Will it take another 156 years for Americans to finally see the light and commit themselves to the fight for freedom?  Perhaps in 2050 we will be closer to an answer.  Or will socialism, radical environmentalism and one-world government be fully entrenched in American life?  Right now there is nothing in the way to stop it, short of civil war.

Ladies and gentlemen, all the talk, all the rhetoric and all the articles in the world will not turn back the clock to the principles upon which America was founded.  Either the believers and fighters in the defense of freedom and liberty coalesce as one on a grand scale, or the hands of the American clock will click ever onward towards abject socialism, radical environmentalism and the one world order.  The clock’s pendulum has swung to the left for over 100 years.  Due to the vote of the socialist Democrat majority, the Pendulum of our clock swings ever farther towards personal enslavement, as freedom smiles from a distance and then fades into a dim memory of all things past.

Instead, what has been created is a huge mass (tens of millions) of bought off weak Americans, miscreants, freeloaders, illegal aliens and criminals, literally sucking the economic life out of productive Americans, aided and abetted by the federal government, riding a white horse called Robin Hood, with a saddle named Progressive and reins and bridle called Liberal.

All these bought off voters have their teeth firmly embedded in your hide and their hands deep in your wallets.  They have a government-mandated contract on your earnings, enforced at the point of a gun, pointed at your head.  You are their slave by the simple operation of a plurality of socialist Democrat voters.

We guarantee you that this was not an accident, nor was the Federal Reserve, the IRS, social security, the New Deal, the Great Society, Medicare, Medicaid, 80 welfare programs, Obama Care and maybe even Medicare-For-All if Democrats take total control of government.  This was and is all part of a long-hatched plan by the Progressives over a span of 100 plus years, to be the only viable political party in America.  Its’ sad to say but the conservative party, in reality, has no chance to overcome the power of the majority of bought off voters, if they insist on sticking to conservative principles.

The conservative party, just as anxious to grab the reins of power, dumps its principles of liberty to pander to the bought-off voters in order to remain even remotely viable.  By their actions they just have become another sub-chapter of the Democrat party, only not quite as bad.  As a result, each year, the number of bought off voters rises as they jump on the government-enforced, Robin Hood gravy train, aided and abetted by both political parties.

A country that rose to such riches and power on the foundation of freedom and capitalism has now become weak, less powerful, rudderless and essentially an impotent, divided nation that fights with each other.

But in 2020 we are faced with one of two devastating dilemmas.  If Trump fails to reverse the election results in the courts, Americans are faced with a Joe Biden socialist presidency.  It gets even worse if the Democrats take control of the Senate.  In that event, nothing will stop the Democrats from pushing through their socialist and radical environmental agenda.

However, if Trump does prevail in reversing the election results, Americans will be faced with the equivalent of “Rome is Burning.”  The socialist Democrats, Black Lives Matter and ANTIFA will take to the streets all over America, in riots, burning and looting the likes of which we haven’t seen since the civil war.  Trump will be forced to implement the Insurrection Act to quell the violence and restore civil order.

Under the current circumstances of a socialist Democrat big-city voter majority, unfortunately …..

“Your Conservative Vote Won’t Save America From Socialism”

….. even if, by some twist of fate, Trump does win re-election.  There are simply more Americans that want to be controlled by and dependent on government than there are those that wish to preserve freedom and that dependent big-city class and their majority vote are growing, literally by the day.

HAPPY THANKSGIVING:  Allow us to wish every one who reads this article a pleasant and joyous Thanksgiving with family, in spite of the Coronavirus and lockdown orders.  Our culture is held together by the power and glue of family.  If we lose that power, we lose our culture and the goodness that lies in the core of our society.