A Sheriff Speaks To Us All

You will want to read this article because it offers hope from the hand of a Colorado Sheriff who graciously took part in a project I implemented the first two weeks of May.

While watching the various news stories about people around the country opening their businesses in spite of state demands that they stay closed, I decided to do something I’ve had on my mind for a long time.  I want to know how Sheriffs perceive their responsibility to citizens of their counties.

My comments leading into this article will be brief because Sheriff Anthony Mazzola and the letter he wrote to me is the article.

Oxford Languages defines a Sheriff thusly:  A sheriff is the chief law enforcement officer in a county.  He and his deputies patrol county grounds and have the power to apprehend persons who are a threat to peace and order.  In some cases the sheriff’s department issues warrants for suspected criminals and seizes illicit goods found during the arrest process.”

I’ve always believed that a Sheriff answers only to the voters of his or her county… but having been married to a police officer I also know how much trouble politicians, district attorneys, and bureaucrats can cause law enforcement.

Part of the reason I wanted to write about Sheriffs is to make sure you, the reader, know that your County Sheriff is the chief law enforcement officer in your county and to know how important it is to have the best possible candidate for that office on your ballot every election!

The first week of May, I wrote a letter to each of the 64 County Sheriffs in the State of Colorado.  I asked them to respond to 5 questions and created “yes” or “no” answers so they could respond quickly.  They are busy people.  But, I did leave room for them to make any additional comments if they wanted.  The second week of May, the letters were put in the mail.

On May 20th, I received one of the most inspirational letters from a law enforcement officer I’ve ever read.  Remember, I used to be the editor of the National Peace Officer’s Magazine and sat on the Board of Americans for Effective Law Enforcement in Denver for several years… so I’ve heard from a lot of law enforcement officers.

Because since China brought us COVID-19 we hear so many (print, digital, video) news reports about power abuses involving law enforcement, I think that now is the best time to begin making this material available to you.  We need to remember that news rarely reports about the good side of the law and adheres to the philosophy that blood and violence and power abuse is good for readership (that’s our fault) and for advertising sales (resulting from increased readership).  Most of all, we need to have faith that in the end analysis the only emotion stronger than fear is hope and we need to hold on to that for dear life… and that’s not just a flippant comment.  It’s the difference between the light and the darkness life offers each of us daily.

Here are the questions that I enclosed in my letter to each of the 64 county Sheriffs.  Under each question were the words (to be circled) “Yes” and “No.” 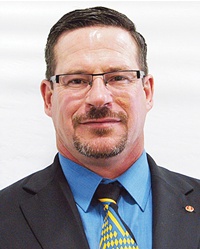 I drew lines across the bottom portion of the page to make room for explanations of the answers given and then drew a signature line with each individual Sheriff’s name and title so he or she could sign it.  In the letter I’m publishing below, that name read “Sheriff Anthony Mazzola, Rio Blanco County, Colorado.”

Sheriff Mazzola did not use my questionnaire to reply.  Instead he wrote the following letter:

“Thank you for the letter I received from you on May 12th.  I appreciate when citizens are concerned about their rights and questioning and holding elected officials accountable.  I have been in law enforcement for 30 years now.  I started my career right here in Rio Blanco County as a jailer and worked my way through the ranks.  I also spent several years working for the 9th Judicial District Attorney’s Office just prior to being elected Sheriff.  This is my second term as Sheriff.

“Prior to coming into law enforcement, I served 4 and a half years in the military.  I served under two of the greatest Presidents in my life; President Ronald Reagan and President George Bush.  I was in Germany when the Berlin wall came down.  I left the military to raise my family in Rio Blanco County but was called back for Desert Storm for only a short while.

“I do not know you or your works, but a quick search bears out your credentials.  I believe you are doing honorable work with the questions you are asking and I would hope your finished article would be used to help educate the citizens of this County, State, and Country.

“I could answer your questions and send them back to you, but you would not even come close to knowing if I answered those questions with conviction.  One of my philosophies is that actions speak louder than words.  I took an oath back in 1986 that I still consider myself to be held accountable to.  When I joined the military I was willing to give my life for the liberties that we enjoyed.  I look around now and I see many people are suddenly faced with their own mortality and they are conflicted, concerned and quite frankly are afraid.  People who never thought they would have to face possible life threatening situations at their jobs are now faced with it.  People are having to decide if health and safety are above their liberties?

“We have seen what power can do to people.  When one is placed into a position of power they have to know where that power comes from.  When I was elected Sheriff, I put together a group of people that I trusted and asked them to watch over me and gave them permission to confront me if they felt I was out of line.  I know who put me in this position.  It was not me.  It was my God.  I am held accountable to Him and I will answer to Him in the end.

“I believe in our mission statement:  ‘It is the mission of the Rio Blanco County Sheriff’s Office to safeguard the lives and property of the people of Rio Blanco, while working in partnership with our citizens to improve their quality of life.  Our commitment is to do so with Integrity, Honor, and Respect with an attitude of Service to maintain public confidence. ‘

“I look forward to reading your article, and I would hope you would ask those questions to the people of this county as that will give you the true answers you ask.

If the mission statement of Rio Blanco County along with Sheriff Mazzola’s comments do not give you the information you need to find and vote for the best possible candidate for Sheriff in November, nothing will.  This letter is filled with American hope as can only be stated by an American patriot.

We need to pay more attention to those we elect to this important office.  Many people have figured that out as they have struggled with government constraints placed upon them during the COVID-19 “crisis.”

In truth, the real crisis that we have is with our willingness to allow governors and bureaucrats to close our churches and businesses and sporting events and to show them that because our fear is greater than our commitment to our constitutional rights, they can remove our freedoms one by one (more about that in later articles) and manipulate us.

If you would like to make a comment to Sheriff Mazzola, please send it to me and I will forward it to him.  Please include a sentence giving me permission to provide him with your email address when I forward him your comments.

Please remember this as we struggle to put the power brokers back in their boxes:

Our founding documents tell the government what it can and cannot do.  If, however, the government oversteps and does something that is not allowed by our founding documents, if you accept the over-step, it is perceived as your having accepted it.  You must take lawful action.  You must follow the laws legitimately on the books in whatever action you take… you cannot become lawless and expect a lawful result.

Be safe… but stay free.  One of the most important parts of that process is having the best possible County Sheriff.

Perhaps a quote from Benjamin Franklin is the best way to end this article:  “They who can give up essential liberty to obtain a little temporary safety deserve neither liberty nor safety.”