The Devil whispers, “You can’t withstand the storm.”  The warrior replied, “I am the storm.”

The toughest soldiers have proven their metal and Rudy Giuliani is one of them.  Remember how he reacted to 9/11 and the destruction in Manhattan?  Remember how Rudy went after the mob, despite threats to his own life, and still stood strong and took them down?

When Saudi Prince Alwaleed bin Talal suggested that the attacks were an indication that the United States “should re-examine its policies in the Middle East and adopt a more balanced stand toward the Palestinian cause,” Giuliani asserted, “There is no moral equivalent for this terrorist act. There is no justification for it… And one of the reasons I think this happened is because people were engaged in moral equivalency in not understanding the difference between western democracies like the United States, like Israel, and terrorist states and those who condone terrorism. So, I think not only are those statements wrong, they’re part of the problem.”

Giuliani subsequently rejected the prince’s $10 million donation to disaster relief in the aftermath of the attack. 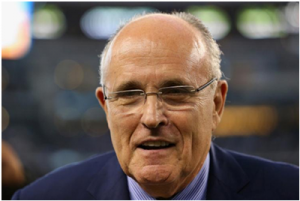 Rudy is a warrior and he always has been.  His spine is steel, his teeth are sharp and he has chutzpah.  Politically conservative actor, James Woods played Rudy in the 2003 movie, The Rudy Giuliani Story, and I know he played it true to the Mayor.

Rudy isn’t the perfect conservative candidate, and he’s getting up there in years, but he has audacity, courage and nerve.  He knows the criminal element, and he believes in justice.  Why isn’t Rudy in the Trump administration?  Why isn’t he our Attorney General?  He would have been an invincible warrior.

Rudy and the Mob

When Rudy arrived as federal prosecutor in Manhattan in 1983, the chance to take on the mob was an offer Giuliani could not refuse.  While many Italian-American public figures avoided the word “Mafia,” Giuliani used it repeatedly at news conferences. “By using the word Mafia correctly,” he insisted, “you actually help to end the unfair stereotype.”

Giuliani’s prosecutorial zeal led an attorney for Genovese boss Salerno to charge that Giuliani had “made it his personal mission to bury my client.”  Rudy uncharacteristically replied with a no comment.

Using evidence obtained by the FBI, eleven organized crime figures, including the heads of New York’s so-called “Five Families,” were indicted by Rudy under the Racketeer Influenced and Corrupt Organizations Act (RICO) on charges including extortion, labor racketeering, and murder for hire. The case struck a blow against “The Commission,” a loose organization of the New York Mafia organizations that met to resolve disputes or discuss criminal activities, sometimes likened to organized crime’s board of directors.  Giuliani also made his prosecutorial bones with the “Pizza Connection” case, a mob-bankrolled plan to import $1.6 billion in heroin and cocaine through pizzerias. (Pizzas again).

According to Italian news, the Sicilian mafia wanted Rudy Giuliani to sleep with the fishes.  Crime boss Salvatore “Toto” Riina ordered the hit on Giuliani back in the 1980s when the future New York City mayor was a mob-busting federal prosecutor.  The source of that story is mafia turncoat Rosario Naimo, who spilled his secrets back then to Palermo-based prosecutors.

Naimo said Riina was alarmed that Giuliani was joining forces with Sicily-based prosecutors like the legendary Giovanni Falcone.  So, Riina dispatched Naimo to New York City and told him to get the okay from the Gambino crime family to rub out Giuliani.

I’ve always liked Jeff Sessions and always believed he was a devout Trump supporter.  However, unless we see some big-time indictments in the near future, I’m afraid much of America is losing faith in him.  Our President has publicly expressed displeasure that Sessions recused himself from the Trump/Russia investigation.

Personally, I’ve given Sessions extra time to “go for the throat” on this nasty mess of Obama DOJ holdovers who were out to destroy our duly elected President.  Why Obama’s FBI appointees are still employed is beyond me, justice moves way too slowly, if at all. 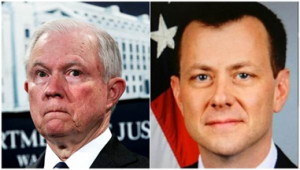 Jeff Sessions should have stayed in the Senate to help our President; his seat is now occupied by a Democrat who believes in abortion up to the minute of birth because Alabama failed to run a good conservative.  If Sessions is replaced as AG, he will probably never be elected to the Senate again. Folks nationwide are disgusted with his failure to take action against the Deep State.

Back in December of 2017, AG Sessions actually defended FBI agent Strzok and claimed that his texts may have an innocent explanation.  Uh, no, they don’t AG Sessions.

In this five-minute video, from November of 2017, Rep. Jim Jordan, member of the House Judiciary Committee, questioned the attorney general on Christopher Steele, the anti-Trump dossier and the Clinton campaign and urged an independent investigation. Jordan laid out the entire series of events and the culprits, and reminded Sessions that over three and a half months ago the counsel sent a request for a second special counsel.  Sessions cannot answer any of the questions and at the very end of Jordan’s questions, states, “There’s not enough basis for a special counsel.”  Are you kidding me?  Now, months later, there is so much more, and still Sessions has not appointed another special counsel.

The Gateway Pundit reported that Sessions balked at questions over the need for a second special counsel to investigate the Justice Department, telling reporters at a press conference that while he’s concerned about recent allegations of bias within the FBI, “sometimes things that might appear to be bad in the press have more innocent explanations, so fairness and justice should also be provided to our personnel.”  I’d like to know what it’s going to take to put these treasonous individuals in handcuffs. 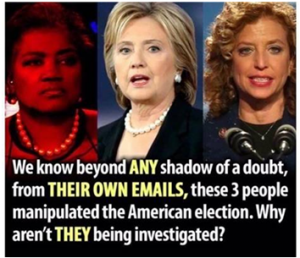 Not only did Sessions recuse himself from the Russia, Russia, Russia investigation, but he seems to have recused himself from way too many other investigations he should be handling that he believed were under the Russia umbrella.  AG Sessions told a small group of lawmakers late last September 2017, that he was recused from appointing a special counsel to look into potential corruption surrounding the Uranium One deal and Fusion GPS’s work on the Trump dossier, according to one of the lawmakers present.  What?

Oh yes, Rep. Matt Gaetz said that when he asked Sessions to appoint a special counsel to investigate the 2010 Uranium One deal and Fusion GPS, the attorney general stood up, said he could not discuss the matter because he had recused himself, and walked out of the room, leaving them with a group of Rosenstein staffers “who showed no interest.”

This leaves Rosenstein in charge and he has no desire to help with an investigation.  Rosenstein appointed Mueller, his mentor and friend, to oversee the Russian election collusion, which we know is total bull dung.

Happy with Our AG

Last September’s article by Andrew McCarthy in National Review extols the fact that our Attorney General is restoring the “rule of law” in the Dept. of Justice (DOJ).  And then there’s this article, Stop Smearing Jeff Sessions.  Progressives’ attacks on the Alabama senator are despicable. They need to stop.

Well, it’s nice that Andy McCarthy was happy with our AG, but the folks out here in the heartland of America are flummoxed as to why no charges are being brought against those responsible for selling 20% of our uranium to Russia, and Hillary getting a $145 million kickback to the Clinton Foundation for it. (I’m now hearing it’s much more that was sold to the Russians and we have been depleted.)  Russians routed big bucks to the Clinton Foundation in order to grease the skids for the uranium monopoly.  Don’t forget the speech Bill gave to the Russians for another half million.  Victoria Toensing represents the whistleblower who knows everything about Uranium One.  Link  Judge Jeanine says it’s time for the Clintons to stop getting away with everything.

And what about those emails from Hillary’s home…where Obama emailed classified info to her home computer.  Huma Abedin and Anthony Weiner also had access to those emails.

The US Court of Appeals for the District of Columbia ruled last December 2017, siding with the Jeff Sessions DOJ which argued on Clinton’s behalf, against ordering the release of draft indictments prepared against her during the mid-1990s Whitewater scandal.  Why would Jeff Sessions side with the federal court to keep Hillary’s info out of the public?

In September of 2017, Sessions hired his new chief of staff, former US Attorney for the Southern District of Iowa during the George W. Bush years, Matthew Whitaker. Whitaker has stated that the Mueller investigation could be turning into a witch hunt.  It’s been that from day one, but we thought this was a positive development.  Whitaker stated that it was a violation for special counsel Mueller to investigate Trump finances. Well yeah, the same goes for Manafort and Gates!  He’s right, but where is this guy today?

Fired former FBI Director James Comey went on a speaking tour last winter talking ethics in leadership, when he was the one who leaked classified information to the New York Times. My friend Rick Wells is right when he says, “Listening to a speech from former FBI Director James Comey on ethics and integrity is as ridiculous as a lecture from OJ Simpson on the importance of safe freeway driving or Charlie Manson on family values.” 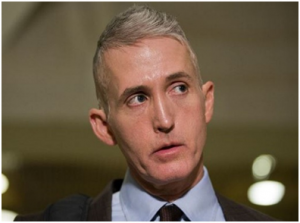 Gowdy is Not AG Material

Many Americans believe Trey Gowdy would be a great AG, but no way in hell would I want him as our Attorney General.  I’d stick with Sessions before I’d go for globalist insider Trey.  Devvy Kidd’s recent article Gowdy, Sessions, McCain – One Down, Two To Go, clearly exposes the real Trey Gowdy.  He is among the 34 republicans who are leaving Congress.  Buh-bye, don’t let the door hit ya where the good Lord split ya!

Gowdy is all bark and no bite.  What did he do with the Benghazi investigation?  Did he skewer and nail Hillary to the wall?  Nope, she’s still running free. Gowdy disagrees with our President and fully supports Robert Mueller’s investigation.  Here are just a few of Gowdy’s statements.

Trey Gowdy is not someone I would want as Attorney General of this great nation.  We need someone who will not kowtow to the establishment and rub shoulders with the enemy.

Quite obviously the inmates are running the prison. And the swamp rats long ago infested the DOJ and FBI.

Sessions leads a critically important organization. He has allowed the DOJ to stonewall Congress and has looked the other way as Deep State, Trump-hating operatives within his own department have actively participated in the conspiracy to destroy President Trump.

The American people want the Obama-Clinton-Soros Mafia investigated and prosecuted. For some reason Sessions has refused to do so. Link