Home/August 2020, Opinions/Americans Have Been Had And Don’t Even Know It

Americans Have Been Had And Don’t Even Know It

How is it, in 240 plus years, millions of Americans went from self-reliant, independent, responsible, God fearing people who believed strongly in unalienable rights, an inviolate work ethic, true justice and individual freedom, to money-grubbing, greedy, stupid, selfish, immature people, lining up for government handouts, or looting and burning our cities?

Why do we instantly believe what we are being told about ”Climate Change”, when the true science has debunked man-made global warming? It is not about science or the environment.  It’s about control of the masses.  It’s a con, a fraud and a lie!  Nevertheless, millions of Americans have bought into the lie. 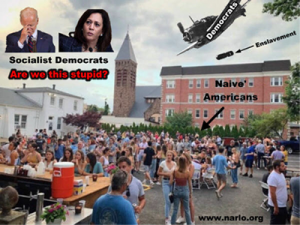 Why have we let our schools and colleges be converted into socialist and environmental indoctrination centers instead of objective learning institutions?  Is it any wonder that parents want to home school their children or send them to charter schools at a significant cost?  They still have to pay school taxes.

How did we allow most of our news media to morph into an arm of the Democratic Party, where conservatism, individual rights and the Republican Party are censored, maligned and vilified?

Why do we buy into the Democrat Platform that will force Medicare-for-all health care, the Green New Deal, free college tuition, forgiving all student debt and health care for illegal aliens upon us?  Are we that stupid?

Where is it written that we must let the Democrats repeal our 2nd Amendment, the Electoral College and the Senate Filibuster Rule?  That’s what they have sworn to do.  We will only let them, if we vote them into office.  Are we that stupid?

Why do we keep voting known socialists and communists to our federal, state and city legislatures?  Big cities run by Democrats are the worst.  Representative government is a direct reflection of the very people that vote politicians into office.  Has the majority become socialists or communists?  It would appear so.

How on earth could we believe that de-funding the police is a sane policy?  As our population grows, especially in our big cities, we need more police, not less?

Why do we allow violent groups, like Black Lives Matter and ANTIFA, take over our cities, loot our stores and burn our businesses, while telling the police to stand down?  Why are prosecutors not prosecuting these violent crimes and throwing the perpetrators in jail, the Coronavirus be damned?

Why do we condone our government representatives spending our taxpayer money wildly without any other purpose than buying votes from some constituency group?  That’s not representative government.  That’s racketeering, corruption, collusion and fraud.

Our representatives have not only become corrupt, they have instituted a fourth branch of government by creating federal, state and local bureaucracies that circumvent the political process.  Those agencies have become an un-elected power unto themselves that purposely undermine the will of the electorate and upset the balance of political power.  Those agencies have a name.  They are called the Deep State and they have a decided liberal bias because most of them are products of our liberal colleges.  They make rules and pass laws that are in direct violation of Article 1, Section 1 of the U. S. Constitution, wherein it states in part: “All legislative powers [the making of laws] shall be vested in the Congress of the United States.”  Most state constitutions have similar language.

How can we justify leaving our borders open to anyone who wants to come here?  They break our laws and are then rewarded for the law breaking with free health care, education, housing, food and clothing, all at taxpayer expense.  Are we not aware of the damage that the policy of open borders puts on legal American in lost jobs, the influx of diseases we eradicated decades ago and radical changes to American culture?  If we vote in the Democrats again, they will grant amnesty to these illegal aliens, setting them up to be future Democrat voters since most of the illegal aliens come from socialist countries.  Is this not the plan of the Democrats?  Of course it is.

The family, (one man, one woman and children) Christianity and God-given, natural rights are at the core of our culture and the foundation of our system of government under our Constitution.   Without them, our culture collapses like a house of cards, which it appears to be doing right now.  Why don’t we get it?  “We Are Free Because of Our Constitution.”  Nevertheless, we have tolerated the systematic attack by the Democrats on these cultural institutions without an uprising of the American people.   Why?

Are we so dumb-struck, naïve’ and ignorant we can’t see that we are being torn apart piece by piece by evil forces (socialist Democrats, Black Lives Matter, ANTIFA, George Soros and others) whose sole goal is to tear down the very fabric of our culture and render us impotent and slaves of their socialist/communist utopia.  Are we that stupid?

The truth is, free Americans are at war with a destructive ideology that is intent on destroying them and they refuse to accept it, or have purposely, or unintentionally, ignored it.

There are two choices in war, fight back or capitulate.  Before a shot has been fire, have we already capitulated?  Are we that weak and stupid?  In the words of an anonymous writer:  “The days of walking on pins and needles are over.  The days of worrying about feelings have ended.  It’s time to step on some toes and take back our country.”

Why do you suppose that gun and ammunition sales are going through the roof?  Millions of free Americans are not dumb-struck, naïve’ and ignorant.  They are preparing for what is to come.  (See: “There Comes A Time When You Must Face A Threat!”)

The only way to take back a country that has separated itself from the principles of freedom is by force.  It should be readily apparent to every one that you can’t subdue a bully by talking nice.  The Democrats, Black Lives Matter, ANTIFA and others who would attempt to destroy this country by radically transforming it into a world government collective or a socialist nation, are bullies, enemies of the American people and traitors of freedom.  The punishment for treason is lengthy incarceration ….. or death.

Every time you talk to a person that has aligned him or her self with the Democratic Party, it can only be construed that they are either politically blind, corrupt, wholly ignorant, or a traitor.  The current Democrat Party is a treasonous organization bound and determined to destroy individual liberty.  If the nominees to president (Biden) and vice president (Harris) are elected this November, it will only bring us closer to civil war or revolution.  The Coronavirus and the massive government control it triggered have highlighted the growing evidence of open resistance to government tyranny and a potentially “hot” revolution.

America is a great country and the American people are an exceptional culture because of individual freedom and the unalienable rights that were born in America some 244 years ago.  For America to succumb to rising global power and merged into the one-world-order under socialism, would set the path to freedom for all peoples of the earth, back 300 to 400 years.  It could take another 300 to 400 years to restore what America started, if ever and such restoration could only arise out of the ashes of a violent revolution.  If America dies, its death will be at the hands of today’s generation and will subject all future generations to the dictatorial rule of the global ruling class and the moneychangers that reside within the walled safety of their secretive enclaves.

Why have we allowed ourselves to be had (taken in) by a radical, un-American, unconstitutional ideology?  How could we not know it?  Are we that stupid?  If we know it, why aren’t we doing something about it?