Home/May 2021, Opinions/An RPG, EMP, Or Hacker Could Turn Our Lights Off

An RPG, EMP, Or Hacker Could Turn Our Lights Off

“No electricity, no hot water, no heat – at times, we struggled. We’d wake up in the morning and wash with water we heated on a hot plate. And we’d go to bed at night wearing skull caps, sweat shirts, and gloves”.   —Jalen Rose, American former professional basketball player

“We forget just how painfully dim the world was before electricity. A candle, a good candle, provides barely a hundredth of the illumination of a single 100 watt light bulb.”  Bill Bryson, American–British author of books on travel, the English language and science

Did you ever wonder what it would be like to live without electricity?  There are so many things that you rely on in your everyday life that depend on 120 Volts AC being readily available at the sockets around your home, or the 240 volts required for your electric clothes dryer and your electric water heater.  There would be no more water, sewer, or electricity because the pumps wouldn’t be working and the generators wouldn’t be turning.

Your lights, refrigerator, your electric stove, your television, your radio, your furnace or air conditioner, your garage door opener, or your charger that charges up your Iphone or computer would cease to operate.  Tens of thousands of cell phone towers all over America that relay tens of millions of phone calls would cease to function after their back up batteries were depleted. 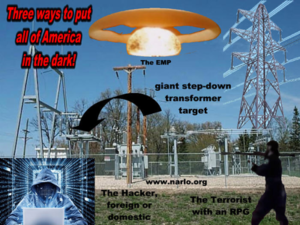 Think of the items in your home that require batteries.  No, no more batteries and no more smoke detectors because without electricity batteries could no longer be manufactured.  Your flashlights would no longer work as your existing batteries lose their charge over time.

The trains wouldn’t work.  Mass transit would be shut down.  Airplanes wouldn’t fly and cars and trucks wouldn’t drive and all the traffic lights would be out.  The elevators in multi-story buildings would stop and bridges would be stuck in the position they were in when the power went off, up or down.

You know all those trucks with which you share the road?  Those trucks bring food to your local grocery store.  But they would all stop.  The shelves of remaining food would empty in just hours due to hoarding.  Where are you going to get your food when it runs out?

The hospitals would be shuttered.  Police, fire and emergency medical technician (EMT’s) vehicles would no longer run without fuel.   Even worse than that, our military bases would be shut down.  That could potentially be a devastating national security issue, opening America up to attack by a major super power.

Oh sure, you could buy a generator to power some of the items in your home but generators need fuel to operate.  Without electricity not only could you not manufacture fuel, the pumps at the gas station where you get the fuel would be out of service for lack of electricity, or the tanks would be empty.

Without electricity our lives would be pushed back to the pioneer days with candles and outhouses.  We’d have to walk or take our bicycles to where we wanted to go. (See “Back To the Future”)

Do you have any idea how easy it would be for a foreign enemy, terrorist, or hacker to take out the entire electric grid in the United States that could take weeks or months to fix?  Are you prepared to live without electricity for weeks or months?  Not likely.  People would die by the millions just from starvation.  Gangs would form and they would steal and loot to get what they want and they would do it with guns.  Anarchy and chaos would reign as the people did everything they could to survive.  America that operates under the rule of law, for all intents and purposes, would be lawless.

The most effective way to take down America’s grid is from what are called EMP’s, or electric magnetic pulses.  All major foreign super powers have EMP bombs in their nuclear stockpiles.  Setting off two EMP nuclear bombs in the atmosphere, one over the West Coast and one over the East, is all that would be needed to wipe out most power in the US, even nuclear and hydro power.

The control mechanisms that run all power generation plants contain transistors and microchips.  Both of these on-off control devices contain miniature micro switches.  Very small distances separate the gaps in these micro on-off control switches, sometimes measured in nano-inches.  (There are just shy of 1 billion nano inches in an inch)  A powerful electro magnetic pulse would fry those devices, short circuit the gaps and render them inoperable, thereby removing all control from power generators and large power transformers, or LPT’s as they are called.

So what about the LPT’s?  LPT’s are located at generating plants and substations to step-up electric power to very high voltages for transmission on the grid, or to step-down the large voltages to smaller voltages for distribution to homes and businesses.  The LPT’s are very complicated. It can take a year or more to manufacture an LPT with very strict quality control measures required.  An LPT can cost millions of dollars and weigh between 100 to 400 tons, making them a small nightmare to move.  Many of the LPT’s are built in foreign countries.  Some of those countries are hostile to the U. S., China being one of those countries.  America’s stockpile of LPT’s is very limited and could not sustain massive LPT failures.

A hostile nation could release several highly trained insurgent teams into the U. S. to take out not only the LPT’s, but also the huge transmission towers carrying electric power to our cities and towns.  An RPG (Rocket Propelled Grenade) fired upon one of the LPT’s would render it useless.  Explosives attached to the transmission towers would bring down the towers and the high voltage wires the towers were supporting.  An attack on just a few sections of the power grid or the LPT’s in critical parts of the country could cause a cascade event, cutting off most of the interconnected power grids all over America.  The repair time could be measured in weeks or months and possibly even years.

Out of this discussion of the power grid and LPT’s we can’t leave out the system’s vulnerability to hackers.  By now most of us are aware of the damage done by hackers to the Colonial pipeline that shut down gas supplies to multiple eastern states, mostly likely caused by foreign actors such as Russia.  Dry gas stations and long lines at gas stations that still had gas, erupted almost instantly.

Most of the devices that control our electric generating plants, our pipelines, our phone lines and our sewer and water lines are connected to the Internet.  Anything on the Internet is vulnerable to highly skilled hackers no matter how many firewalls are put in place to stop hacking.  The power grid and LPT’s are no less vulnerable.  It won’t be long before some hacker penetrates America’s electric system in one way or another and then demand a multi-million dollar ransom to give control back to the operating company.  The Colonial pipeline company paid out $5 million to get control of their systems back and then it took almost a week to get the pipeline up and running again.  Paying off hackers only emboldens the hackers.

Yes, the federal government is aware of these vulnerabilities and has studied the issue extensively.  But not much has been done to fix the problems or remove the vulnerabilities.

An open and free society is always vulnerable to bad actors who wish to do us harm.  Cutting off our electricity would bring our culture, our form of government and all of our institutions to a complete halt and thrust us back in time where 330,000,000 people could not survive.

Electricity is not our only vulnerability.  We can’t live without water either but our water systems are wide open to hacking or the poisoning of their major water reservoirs and sources.  Low flying aircraft or even drones could fly over our large reservoirs and drop deadly poisons into the water.  Some poisons could linger for very long times before dissipating.  People would die from the poison before the systems would be shut down. Then they would begin to die without fresh water.

Only government, working in tandem with private industry, can eliminate or reduce the threats.  One way to reduce the threat to our electric and water supplies would be to take the operating systems off the Internet and change over to hard wire controls.  Yes, it would be expensive but not near as expensive as losing the entire grid.  Another way would be to hardening the generating plants and substations with shielding and guard units to make them less vulnerable to attack.

Whatever government and industry does, they had better do it in fairly short order before bad actors exploit our serious vulnerabilities and destroy our way of life forever.