A friend of mine said, “This travesty in Kenosha just proved that certain segments of the population are now nothing more than walking weapons, waiting to be used for the agenda against the American people.”

Not only that, but an agenda against Western Civilization!

I don’t know about you, but I am more than sick of lootings, burnings, anarchy, cop killings and total anarchy in various cities around America.  What’s worse, if the excuse continues as to George Floyd or Jacob Blake—I’m sorry but both of them carried lifelong crime rap sheets.  Both did not comply with law enforcement. Both disobeyed orders from the cops.  Both would not be considered ‘model’ American citizens. Both had spent much time behind bars.  Both of them were outright criminals.  They both would be alive today or healthy if they obeyed law enforcement officers. 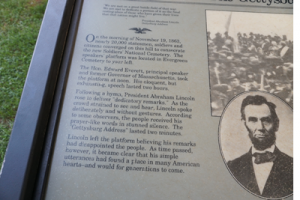 Just for an update, in the past three weeks, I drove across the USA to the Gettysburg National War Memorial.  My wife and I stood on the same spot where President Lincoln gave his immortal speech on Cemetery Ridge, which stands adjacent to the battlefield.  Even 157 years after November 19, 1863, I cried at the words written from his speech on a plaque.  I remember reciting those eloquent words at my eighth-grade talent contest.  I still remember that speech to this day. “Four score and seven years ago….”

(We stood where President Lincoln stood on November 19, 1863 on Cemetery Ridge at the Gettysburg Battle Field to give his famous speech.) Photography by Frosty Wooldridge

Sandi and I hiked some of the Appalachia Trail starting on Springer Mountain where it heads 2,190 miles to Mt. Katahdin, Maine.  We marveled at the “boot tree” where hundreds of exhausted backpackers over the decades tied their worn-out boot laces together and tossed the boots into an enormous tree at the southern end of the trail. It’s a boot 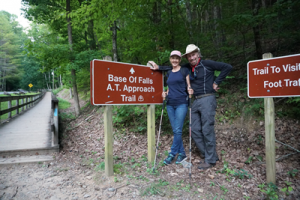 graveyard with happy memories.  We hiked to the highest elevation east of the Mississippi River at Mt. Mitchell at 6684 feet. It’s a beautiful tunnel of green leaves and magnificent beauty.  The first lady to hike it all the way: Emma Gatewood at 67 years of age.

We also visited Jefferson’s Poplar Forest summer home and Monticello. We relished our journey on the Blue Ridge Skyline Drive in the Shenandoah Valley.  We visited President Andrew Jackson’s home along with President Andrew Johnson, both from Tennessee.  Also, George Vanderbilt’s mansion at the Biltmore at 179,000 square feet in Ashville, NC. Unbelievable millions spent on building that architectural wonder to rival Versailles in France or The Hearst Castle in California.

We also visited Grand Old Opry House. Who wouldn’t give their week’s pay to hear Dolly Parton and Willie Nelson sing on stage?  We visited Willie Nelson’s museum. What a fantastic life!   We visited MLK exhibits along with George Washington Carver and Oprah Winfrey. What a legacy from Ray Charles! The list grows for all races, creeds and colors in America.

Our journey showed us that the least Americans can rise to be the most incredible achievements in America—with hard work, integrity, persistence, determination and true grit.

Okay, to save money, Sandi and I drove a van so we could sleep in the back at night.  At one stop, we pulled into the parking lot of a Baptist Church.  It was on the outskirts of town away from noise and traffic.  It was wide open.  We fluffed up our sleeping bags and air mattresses to quickly fall asleep.

Around 1 a.m., a flashlight shined in our faces and a knock on the window.  I woke up, opened the sliding door to see two police officers.

“Do you realize you’re on church property and must move?” one said.

“Gosh, this is out in middle of nowhere and we’ll be gone at sunrise,” I said.

“No can do,” he said.  “Do you have license, registration and insurance?”

“Yes sir,” I said, getting over to the glove box.

He checked me out.  I was clean. Haven’t had a traffic ticket in 30 years!

“You’re going to have to move off this lot,” he said.

“Thank you for your cooperation,” the first officer said.

As they were about to depart, I said, “Thank you for your service officers.”

They nodded with smiles.

What was the difference with my run-in with the cops and that of George Floyd, Jacob Blake or any other characters resisting arrest or calling cops names or being belligerent and potty-mouthed?  I followed the cops’ commands. I politely said, “Yes sir and no sir” to all their questions. I handed over my identification.

Can  you imagine the difference in America today if Floyd or Blake or other characters would have simply followed the orders of law enforcement?

As to BLM and Antifa—they must be arrested, prosecuted and imprisoned before they destroy more cities with looting, burning and killings. This is way beyond Floyd or Blake!  This is sheer, pure anarchy and sedition against the law-abiding citizens of America, Black and White.

The facts remain, no matter how you cut it, Black on Black crime soars 100 to 1 over police shootings of Blacks.  Instead of burning our cities down, BLM and Antifa need to vote, run for office, make peaceful changes and work within the law.  If they lived in China today, they would have already been executed.

If BLM anarchists wanted to improve America, they might start by rebuilding, refurbishing and improving their citizens in Baltimore, Detroit and Chicago. Blacks dominate those towns, but thus far this year more Blacks suffer deaths from other Blacks than any police shootings X’s into the hundreds.  Already Chicago has seen 443 Black homicides by 443 other Black shooters in 2020. That’s 50 percent up at this time from last year.  Whites didn’t do any of those shootings because they’ve fled those cities.

Is it possible that top Black CEO’s, millionaire athletes, governors, mayors, and movie stars might come together to form a plan specifically targeting improvement of Black schools, cities and jobs?  Wouldn’t it be better to pay for recreation centers, educational tutoring, fatherhood classes and a dozen other ideas to solve the inner-city violence?  Wouldn’t it be worth it for all of us to work toward ‘our’ mutual, peaceful and positive future?