‘The more we do to you,the less you seem to believe we are doing it.’ – Joseph Mengele, SS Officer “Angel of Death”

The comparisons to that of America and Germany in the 1930s now coming to the forefront in the news and comments of people are astounding to say the least (Hosea 4:6).

At The Sons of Liberty, we noticed this years back in comparison from the Bush connections to that of the Mockingbird media to Project Paperclip to September 11, 2001, etc… (Jeremiah 11:9). 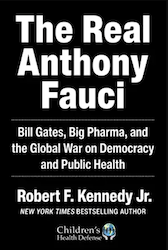 “What you see on Dr. Fauci, this is what people say to me, that he doesn’t represent science to them. He represents Josef Mengele … the Nazi doctor who experimented on Jews during the Second World War and in the concentration camps,” Logan told Fox News. “And I am talking about people all across the world are saying this. Because the response from COVID, what it has done to countries everywhere, what it has done to civil liberties, the suicide rates, the poverty, it has obliterated economies.”

“The level of suffering that has been created because of this disease is now being seen in the cold light of day, i.e., the truth, and people see there is no justification for what is being done,” she added.

Conclusion: This woman is spot on with her assessments and observations in judging Fauci by his fruits (Matthew 7:16).

Yet, it would do good for Americans to take heed to the fact that they are, at this point in history, responsible for letting not only Fauci but also their said government murder far more than Mengele ever did.

This same government that wants you to believe that it is about safety are the very ones that have illegally sanctioned the murder of the babies in the womb (Proverbs 6:17).