Are American Enemies Using Our Ports and Borders to Invade America?

I’ve got a theory on some circumstantial evidence.  I’ll give you the theory, then the evidence.

Is the CCP and ilk working with American Communists to infiltrate for an invasion?  I think the Chinese have been sending arms over to America through their American communist contacts (or communist sympathizers, aka traitors) and they’re storing them in warehouses scattered in cities across America, waiting for the “go” order.

I’m hypothesizing that the current border migrant flood is actually hired mercenaries for an invasion.  They waited until the Biden administration was in place to flood the border.  They’ve put a gag order on the ICE and CBP agents in order to downplay the extent of invasion, pretending it’s “under control” – to give players time to get in location.  Remember they’re busing and flying these “migrants” to various locations across the U.S.  What if they’re transporting them to the locations of the stored weapons? 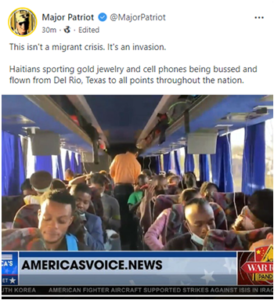 The migrant mercenaries then become little armies in cities unsuspecting, waiting for the go order.  They’ll be armed and most likely their leadership is already in place.  Look at the various pics of the migrants being bussed.  They’re well dressed, gold jewelry, high tech phones, and not bedraggled whatsoever.

While it’s documented the Chinese have been working with BLM and Antifa, supplying and funding them, what if that’s the cover for something more sinister?  (Not that that’s not treason in and of itself.)  [See articles here, here, and here.]

The Chauvin trial of the media spun lie about George Floyd is the pretense for new and upcoming riots.  But this is way bigger than that.  That is just the pretense to throw America off balance.  In the meantime you have (another) aggressive attempt at disarming Americans.

My theory is that they’ve been putting the arms in place for a couple years (for every caught shipment, how many have not been intercepted?).  Now they’re getting the mercenaries in place.

I think Covid has been one of the covers for getting some of the things done and in motion, (consider Newsome’s laundering “masks” via CCP).  California has some of the most draconian illegal covid mandates in place.  Can Newsome justify multi-million even billion dollar bills with China without the “pandemic crisis”?  They need a ruse to launder the weapons.  They need people afraid of the government and locked down.  What other states have been draconian?  I’d start there for weapons warehouses.  (I’d guess they’re Democrat run states.)

They waited until the border was unprotected with an administration that is actually part of this plan.  (Biden is owned by the CCP and everyone who’s been paying attention knows it.)  Anyone paying any attention can see these people are not walking thousands of miles for “refuge” in America.  These people are clean and well-kept, some overweight (no hunger issue), with high dollar phones, clothes and jewelry.  Many have been spotted with credit cards.  No, someone has organized and paid a lot of people to flood our borders.

I think they’ll use BLM and Antifa “riots” to start the ball rolling (cue Floyd/Chauvin riots), and when chaos ensues, I think they’ll move in for a total disarmament of the American people.  When (if, really – we won’t let that happen but I think that’s their plan) the disarmament of the American people happens, the Communists (in whatever national garb they’re in) will come out and take over, (or maybe the UN will be called to “restore order”?).

Simply put, we cannot disarm.  Americans organized and armed is the only reason they haven’t done it before now.

In this article we learn that Newsome had made a billion dollar deal with China for “masks” shipped monthly, but the details are not transparent.  I think we have weapons laundering going on here.

In this article (from last summer) we have weapon caches in various California warehouses.  If you don’t read any other article I link, please read this one (and the one at the end).

Assault weapons were seized in Louisville last year, sourced to China, and headed to Florida, article here, here and here.

This story from two summers ago, is gun parts from China were seized in California, article one and two.

This report tells us there was a 30% increase in gun and drug trafficking on our NORTHERN border last year.

And yesterday the fool basically started the process of destroying the U.S. Constitution, specifically in relation to the2nd Amendment, but it will have an overall destruction if acted upon.  He is setting up lawless rule (not that we aren’t already under such, but this will make the government’s illegal actions now legal).  Article here.

I honestly think the cure to this communist takeover is:

Lastly, this is an astounding overview of how the British attempted arms control and confiscation just before the Revolutionary War.  Not much mainstream history likes to expound on the reality that the British tried to disarm the colonists.  There are eerily similar strains from those days to this day.  I can’t recommend this read enough.  It’s full of valuable insight and inspiration.