On January 6, 2020, the shot heard round the world was that of a U.S. Capitol Police officer, (identity unknown and not released to the public at the time), who fired a single shot killing election protester Ashli Babbitt in broad daylight.

Lt. Michael Byrd, the now identified gunman, justified his shooting of Babbitt in a recent interview with NBC News.

“I know that day I saved countless lives,” Byrd said. “I know members of Congress, as well as my fellow officers and staff, were in jeopardy and in serious danger. And that’s my job.” 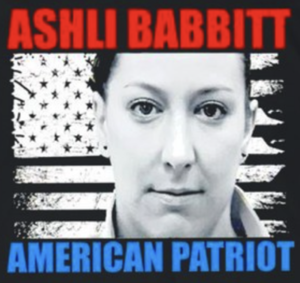 “It’s all disheartening, because I know I was doing my job.”

“It’s something that is frightening,” Byrd said. “Again, I believe I showed the utmost courage on January 6, and it’s time for me to do that now.”

“I hope they understand I did my job,” Byrd said. “There was imminent threat and danger to the members of Congress. I just want the truth to be told.”

“She was ‘posing a threat’ to the United States House of Representatives,” Byrd told NBC.

The Department of Justice did not pursue criminal charges against Byrd and the U.S. Capitol Police Department said it would not discipline Byrd and cleared him of any wrongdoing.

As a retired NYPD police officer and a person who follows politics, here is what is wrong with the official position of the “justified” killing of Ashli Babbitt.

Ashli Babbitt, an unarmed 5’ 2,” 110 pound woman, posed no threat of imminent serious physical injury or death to either Lt. Byrd or members of Congress. By Lt. Byrd’s own admission, he did not even identify who he was shooting at or if that person was armed with a lethal weapon or not. Byrd did not identify the person or the threat, by his own admission. He just shot at a person coming through a window. A police officer is NOT authorized to use deadly physical force because someone is merely “posing a threat.”

If the standards for using deadly physical force by police officers were simply that a person poses a threat, police officers around the nation could never be held responsible for any shooting, because in their mind they used their firearm because the person they were engaging with appeared to be posing a threat to them or to someone else.

Many officers have been incorrectly put on trial for justifiably using deadly physical force when there was a clear and present danger of serious physical injury or death by perpetrators who were either brandishing a firearm or a knife. Many of these pointless trials were politically-racially motivated, where the perpetrator was black and the officer was white. Many police officers have lost their jobs, have been put on trial, and have been sentenced to prison for far less egregious shootings than that of the killing of Ashli Babbitt by Lt. Michael Byrd.

Kamala Harris, the usurper vice president, insulted the intelligence of the American people when she gave a speech on January 6th, shamelessly claiming that the January 6th capitol riot was as grave a threat to democracy as the Japanese bombing of Pearl Harbor and the 9-11 terrorist attacks were. Comparing the January 6th “mostly peaceful demonstration” to Pearl Harbor and 9-11 is spitting on the graves of the thousands of people who perished in those attacks.

The January 6thprotest was not an attempted insurrection. Ah, those Democrats; masters of Saul Alinsky tactics and deceptions. They always play by his playbook, get away with it, and they have their liberal media allies on their side who always script their narratives for them. In this case, accuse your political opponents of what you yourself are guilty of: insurrection.

The election was openly stolen by voter fraud, with plenty of video evidence and Dominion voting machine anomalies that showed it. In their quest for power, the Democrats broke all the rules of democracy to insure Joe Biden would be made president. That was the real insurrection of 2019-2020.

Let’s imagine if the Democrats did not succeed in stealing the election and President Trump was elected and was set to be sworn into office as he should have been. Now let’s also imagine that Black Lives Matter and Antifa did the exact same actions on January 6th that MAGA Trump supporters did. Let’s say that they stormed the Capitol Building and an unarmed BLM or Antifa woman was shot to death by a Capitol Police officer in the same manner Ashli Babbitt was.

Here are what the mainstream media narrative headlines would look like in that scenario:

Imagine if the woman in that fictional scenario was black and the Capitol Police officer who shot her, in the same manner as Ashli Babbitt was shot, was white.

Americans eye witnessed the 2020-2021 riots, murders, lootings, and arsons that were called “mostly peaceful protests,” by CNN and other liberal media outlets, so it is not a stretch at all to suggest that the mainstream media narrative would have been quite different had President Trump retained his office and a similar scenario was played out on January 6, 2021 by BLM and Antifa.

As our American politicians attempt to exploit and propagandize the January 6thelection protest, referring to them an insurrection riot, We the People,American patriots, will not be fooled. January 6th was a date that democracy died in America,personified by the murder of Ashli Babbitt, as the presidential election was stolen and an unelected usurper was permitted to be unduly seated as the 46th president of the United States. Ashli Babbitt, an army veteran of 14-years, will be remembered as an American patriot and martyr, the person whose murder symbolized the end of fair, honest, open elections and the death of democracy in the United States.