For those interested in disaster preparedness, there are numerous lessons throughout “Contagion.” Many miss the movie’s intent if they only watch it once. (I’ve watched it several times). It teaches more about the ramifications of a viral pandemic than any other movie in the genre, yet it has some major facts omitted or misrepresented. I will address those in a moment.

The movie is about the emergence of a new, highly infectious pathogen and how those responsible for mitigating its spread must go about doing their business with minimal rending of the “social fabric.”

The ripping apart of “social norms” is the inevitable outcome when inhibitions, regard for criminal law, moral, ethical and personal 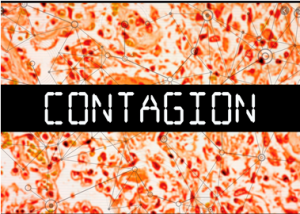 standards and values are cast aside as a direct result of fear, denial, ignorance and psychological responses that, once they coalesce into muddled confusion, cause many people to panic. Conversely, those who keep their wits about them are often compelled to aid anyone in need.

When faced with deprivation, especially shelter, food, water and restrictions from free movement (i.e. being unable to drive into another state), many people’s individual psychological dynamics are disrupted. The human mind severs ties to inhibitions that keep us emotionally well-adjusted when there is no threat present. In principle, the brain ignores all the “programming” done by parents, schools, peer groups, churches, and life’s circumstances, etc. and reverts to primal instinct. If in need of food and water, those driven by instinct would do anything to obtain what they seek, even if that means taking out a close friend to gain access to supplies he/she has stored up over years. For lack of a better term, I will call this state of mind Catastrophe Denial Syndrome (CDS) and it is most prevalent in those who have failed to prepare for a cataclysm so severe it shreds societal norms.

This is not a constant, of course, and indications are that many people would simply give up in the face of major calamity. Once that happens, their chances for survival plummet.

As “Contagion” progresses, we see Matt Damon’s character and the girl playing his daughter go through the phases of an evolving 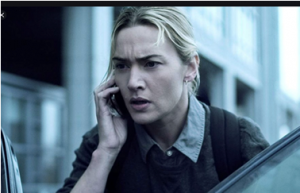 pandemic that tears up “social norms,” yet they keep their wits about them. Social norms begin to unravel when the CDC gets involved and begins implementing processes to contact anyone who may have come in contact with an infected person. Any time federal government agencies arrive, the dynamics shift, sometimes to the resentment of those in power locally who are pushed aside.

In “Contagion” the CDC is alerted to the plight of Gwyneth Paltro’s character and that of her son. While the movie made no mention of it, the CDC can go to an outbreak only if invited to get involved unless a virus infects so many so quickly that their intervention becomes a matter of national security. But those writing the “Contagion” storyline erred.

Even though there were only a couple of cases, as more presented with symptoms at the local E.R., the CDC would have sent a small army into the Minnesota town to do the “cover interviews,” which involves questioning everyone who may have come in contact with Gwyneth Paltrow’s character or that of her son. The need for more help was evident when Kate Winslet’s character spoke with Lawrence Fishburne’s character by phone and he asked when she had last had a meal not from a vending machine and telling her to get some rest. By that point, the epidemic had stricken many not only in the town, but in the state and nation, then globally. In fact, it is unlikely that the CDC would have sent just one epidemiologist in the first place. They would have sent several of them to conduct interviews.

The impact on social norms are evident in the scene in which Kate Winslet’s character is meeting with what appears to be the town’s city council. The discussion gets contentious when a cynical, councilwoman, becomes negative and confrontational, if not outwardly hostile. In a real scenario such as this, a reaction like that would not be out of the ordinary. From the Councilwoman’s viewpoint, the breakdown of social norms sends her into denial when Winslet’s character starts making decisions without that woman’s input. This is a problem for CDC and NIH (the National Institutes of Health) personal who are invited into a town or city to address the problem. In the interests of getting the contagion under control, Kate Winslet’s character had to push back by citing facts, such as how most humans touch their faces more than 3,000 times a day, and that is how they get infected. Viruses of this type can enter the body through the nose, eyes, mouth or even a cut in the skin.

To its credit, the movie gave us an object lesson in something every “preparedness expert” will tell you is their prime and inviolate directive: No matter how much you believe you can trust another person, you must never, under any circumstances, tell anyone that you are preparing or that you have a suitable bug out shelter in preparation for any calamity that might befall the nation. That may seem very 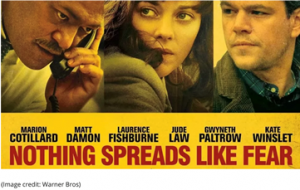 selfish, but adhering to it may be what determines whether you survive or not. Lawrence Fishburne character’s mistake, though different in context, came when he called his fiancée and told her to leave Chicago. Strongly insisting that she tell no one. When she ignores the admonition, and tells a close friend about the outbreak, she, too, insists that her friend tell no one, yet the news winds up on Facebook and the crisis is made public.

In addition, in various scenes when Damon’s character took his daughter out to shop, the chaos they encountered had completely obliterated the social fabric. That became even more relevant when what appeared to be National Guard members were doling out meals ready to eat from trucks. When the supplies ran out, violence superseded chaos. This scene had some subliminal messages, as well. You may have noticed the tents with the FEMA logo on them. Their presence tears what is left of social fabric because it creates a new and unwelcome reality.

In my view, and I’ve been studying survival since the first attack on the World Trade Center in 1993, it was almost too mild of a reaction when the food ran out. A component of primal instinct is mob mentality, and that was observed less than it should have been.

Nonetheless, this movie is a great choice, even if not perfect.