My last column, COVID Vaccines:  Dead Must Be Autopsied brought an avalanche of emails.  Hopefully this one will answer some of the questions.  Below is probably my last letter to the committees.  Next comes the phone calls.  Again, I urge everyone to copy & paste this letter and supplement to a word processor and get it to health safety or science committees in your state.  Just modify it for your state committees and remove my comment about my doggie.  He who roars the loudest gets heard.

Keep hammering on your governor if he’s a Republican.  If you have a Democrat governor but Republicans hold the majority in your state legislature, hammer on them to introduce a bill that will ban vaccine passports, get it passed and off to the governor.  If he/she vetoes the bill, with a straight majority in a large number of states they can override the veto.  Veto overrides in state legislatures (List).  We can defeat this latest draconian tool when enough states say no, it will fall apart.  2022 is big elections for governors across the country.

The new data from VAERS comes out on April 9, 2021.  Sadly, the number of deaths, injured (adverse “events”) and permanent disabilities will have increased.  The supplement page I’m including is a release by ICAN (Informed Consent Action Network) to the new director of the CDC, Dr. Rochelle Walensky.  It seems Walensky is playing the old ‘hide the truth’ game about underreporting anaphylaxis following the COVID “vaccines”.

This letter is a follow up to my last one dated April 5, 2021, which included excerpts from interviews with Prof. Dolores Cahill and Dr. Sherry Tenpenny discussing individuals who get those experimental gene editing technology shots developing auto immune diseases.  Auto immune diseases which take time to develop and then begin to attack the immune system and organs.

I didn’t know much about auto immune diseases other than when I adopted my beautiful West Highland Terrier, Muffin.  She was a rescue.  Always made sure she was up to date on her vaccines.  Muffin developed an auto immune disease; I had to monitor her blood carefully.  5 ½ years later, my vet had to put her to sleep which broke my heart.  Massive kidney failure.

When Prof. Cahill and Dr. Tenpenny speak of auto immune diseases regarding those shots, we are talking about victims developing them which will last a lifetime or lead to early death.  Currently there are 80 known auto-immune diseases, i.e., Type 1 diabetes, multiple sclerosis, lupus, rheumatoid arthritis and so many more that have no cures.  They can affect the heart, kidneys, lungs, blood and the list goes on.

That’s what’s coming from those experimental gene editing technology shots.  I wish so much all those microbiologists (with 20, 30, 40 years of experience), doctors and scientists both here in the U.S. and around the world are all wrong.  What are the chances?

I can only pray Americans do everything they can to boost their immune systems but the irreversible damage will be done, there’s no going back.  Johnson & Johnson, Moderna & Pfizer all have legal immunity thanks to the bought and paid for Congress so who is going to pay all the medical bills?  Texas has shot up 13 MILLION citizens.

After doing more research regarding Dr. Tenpenny’s explanation, yes, it does take 4-18 months, roughly, for the process to begin.  I pray people learn the truth and do not take the second jab (“to make it more effective”), but I’m terribly upset that allegedly 161 million doses have now been given.  It will be a crime to give any of those “vaccines” to children of any age.

Former Pfizer Chief Scientific Officer on Experimental COVID Injections: “I Have Absolutely no Doubt that we are in the Presence of Evil” – Dr. Mike Yeadon

“I’m well aware of the global crimes against humanity being perpetrated against a large proportion of the world’s population.  I feel great fear, but I’m not deterred from giving expert testimony to multiple groups of able lawyers like Rocco Galati in Canada and Reiner Fuellmich in Germany.  I have absolutely no doubt that we are in the presence of evil (not a determination I’ve ever made before in a 40-year research career) and dangerous products.”

I doubt one could consider Dr. Mike Yeadon an anti-vaxxer.

Reiner Fuellmich is a world renown attorney. I’ve exchanged email with him about a class action lawsuit against the manufacturers of those PCR tests he and his colleagues have been working towards.  Make no mistake:  Class action lawsuits are coming over those “vaccines”.  Indeed, it has already begun:

Israelis Cry Out to the World to Stop Mandatory COVID Injections as Lawsuit is Filed in International Criminal Court Over Nuremberg Code Violation, March 22, 2021

“The entire world is watching in horror as death rates have skyrocketed in Israel since the Israeli government brokered a secret deal with Pfizer to inject the entire population with their experimental COVID shots, which are now being mandated as a condition to participate in society.

“The Anshe Ha-Emet (People of the Truth) fellowship — comprising Israeli doctors, lawyers, campaigners and concerned citizens — complained to the ICC prosecutor at the Hague, accusing the government of conducting a national “medical experiment” without first seeking “informed consent.”

“When the heads of the Ministry of Health as well as the prime minister presented the vaccine in Israel and began the vaccination of Israeli residents, the vaccinated were not advised, that, in practice, they are taking part in a medical experiment and that their consent is required for this under the Nuremberg Code,” the Anshe Ha-Emet suit states.

“Tel Aviv-based firm A. Suchovolsky & Co. Law argues that Prime Minister Benjamin Netanyahu’s agreement with Pfizer and Netanyahu’s own admission make it clear that Israel’s warp-speed vaccination campaign “is indeed a medical experiment and that this was the essence of the agreement.”

“The complaint has now been accepted by the International Criminal Court (ICC), and will be considered.”

Colleges and universities have announced mandatory vaccination or students should not show up for classes.  How despicable.  I have published all my letters to you in my weekly columns (including this one) asking readers to get them up on every social media platform possible as well as email lists.  Hopefully parents who have children will stand up to those institutions of lower learning and inform them they are in violation of the law.  That goes for any school districts in Texas who want to force students to get one of those experimental “vaccines”.

I don’t know if any of you have discussed stopping vaccinations in Texas with Gov. Abbott or Attorney General Paxton, but my question is:  Why not?  Don’t we have enough dead already?

This is a tragedy beyond words, not just for Americans but citizens around the world.  POLITICS BE DAMNED.  The American people deserve the truth which is all that’s been asked.  Your committees must investigate as previously outlined in my April 5, 2021 letter.

Help me inform Americans with my book, Taking Politics Out of Solutions.  400 pages of facts and solutions on these issues: “Federal” Reserve, the income tax, education, Medicare, SS, the critical, fraudulent ratification of the Seventeenth Amendment and more.  800-955-0116 for phone orders

Make this a separate page from the letter; an image is worth a thousand words:

21 U.S. Code § 360bbb–3 – Authorization for medical products for use in emergencies

Make this a supplemental page separate from the letter: 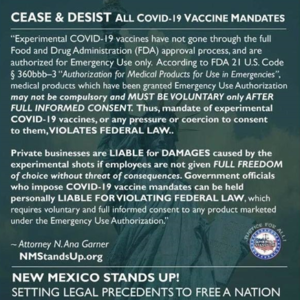 ICAN, through its attorneys, has once again written to Dr. Rochelle Walensky, the new Director of the CDC, this time to demand an answer as to why the CDC’s reporting of anaphylaxis following COVID-19 vaccination is not in line with a clinical study conducted which shows much higher rates following these vaccinations.

The CDC tells the public that “Anaphylaxis after COVID-19 vaccination is rare and occurred in approximately 2 to 5 people per million vaccinated in the United States based on events reported to VAERS.”  However, ICAN reviewed a recent study at Mass General Brigham that assessed anaphylaxis in a clinical setting after the administration of COVID-19 vaccines.  This study, in stark contrast to the CDC’s claim, found “severe reactions consistent with anaphylaxis occurred at a rate of 2.47 per 10,000 vaccinations.”  This is equivalent to 50 times to 120 times more cases than what VAERS and the CDC are reporting!

In a letter to Dr. Walensky, ICAN explained that this alarming underreporting of anaphylaxis by the CDC and VAERS is particularly troubling because it is mandatory for medical providers to report anaphylaxis after any COVID-19 vaccine to VAERS.  In addition, the CDC reports that most of these reactions occur within 30 minutes of vaccination.  The study reported that the mean time to reaction is 17 minutes post-vaccination.  This means that vaccine administrators, then, should be aware of a majority, if not all, of these cases as vaccine recipients are supposed to be observed for 15 to 30-minute periods following vaccination at all vaccination sites.

Additionally, and specifically with regard to COVID-19 vaccines, there has actually been a push by health authorities to inform medical providers that they need to report anaphylaxis to VAERS. Despite this, the rate of reporting still appears to be only around 0.8 to 2 percent of all cases of anaphylaxis.  (This is close to the Harvard Pilgrim study which found that approximately 1% of adverse events are reported to VAERS).

Unless and until this is addressed, underreporting to VAERS, a passive signal detection system, will continue to blind health agencies, medical professionals, and patients from what is really occurring in the clinic and will render true informed consent impossible.

ICAN continues to ask the hard questions of Dr. Walensky and others.  ICAN will closely review any response from Dr. Walensky and will continue to push for improved transparency regarding vaccines and their development, clinical trials, and safety surveillance.