The Left is doing to America what it has done to almost everything it has deeply influenced – the arts, the university, religion, culture, minorities, Europe: ruining it. —Dennis Prager

Bill O’Reilly is fired from Fox News for being a sexist pig. Right. I really believe that! I’m with Pamela Geller who said, “As for these sexual harassment allegations, I find their claims too little, too late, and too opportunistic. It’s interesting how these broads go along until they don’t get their own show or when the payouts begin. It seems to me that these women exploit their sexuality until they don’t get what they want.” 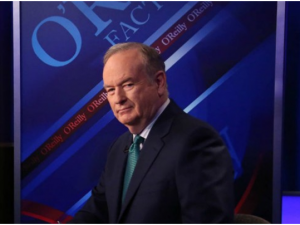 For decades, I worked in corporate offices as a secretary, as administrative assistants, and as middle management.  Prior to the corporate environment, waitressing and bartending paid the bills. In all of these positions, there were a great many men, some who were wonderful, others who were not so wonderful.  And there were a lot of passes.

A woman can easily rebuff a pass in the corporate world with a few well thought out words when the attention is unwanted.  Every strong woman knows that.  So, when I hear that women have complained of sexual harassment and unwanted advances…my immediate thought is they were paid to destroy, or they have a vendetta because they didn’t get whatever they expected to receive.  It’s rare that women can’t totally annihilate an office aggressor, yet it does happen, but not in this instance.

Rupert Murdoch has stood behind his number one nighttime host for a long time, rebuffing the stories of his sexual advances.  O’Reilly gave Murdoch loyalty and profits, something Murdoch prizes.  Remember when Rupert Murdoch and his wife were in Scotland, when Trump opened his new hotel and golf course?  Trump took them to dinner in his new place.  [Link]

Murdoch is 86 years old, and he is known to disdain political correctness.  But one must remember that he is a member of the Council on Foreign Relations.  Although he is usually described as a political conservative, there is little evidence that he has any firm political or moral convictions that could be described as “conservative” in the conventional sense, even with the left’s demonization of him. 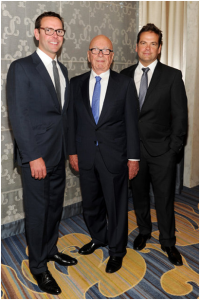 Nevertheless, Murdoch is a common-sense pragmatist, much like our President, Donald Trump.  So, he gave way to his progressive liberal sons and their wives who fired O’Reilly.  The 2014 photo shows Murdoch with his sons, James and Lachen, who will take over Fox News.

Pressure from the Left

Advertising boycotts and protests at the headquarters of News Corp, the corporation that owns Fox News, were all instigated by leftists. O’Reilly’s show lost about 90 advertisers earlier this month after The New York Times reported that five women were paid $13 million to settle sexual harassment lawsuits. They are cheering that O’Reilly is gone.  I’ve never been an O’Reilly fan, and turned him off in the late 90s, but I was sorry to see him ousted, especially with the help of the communist NYTs.

Nevertheless, Tucker Carlson, his replacement, has pulled some very high scores in the slot vacated by Megyn Kelly, and even equaled or surpassed O’Reilly occasionally on viewership.  Murdoch’s choice might be right, gaining younger and newer viewers, but O’Reilly is a major loss.

My choice however, if he had wanted it, would have been Lou Dobbs, the number one man on Fox News Business who speaks the truth night after night.

Bill O’Reilly’s lawyer said the embattled Fox News anchor is the target of “far-left organizations” seeking his destruction, and he’s right.  “This law firm has uncovered evidence that the smear campaign is being orchestrated by far-left organizations bent on destroying O’Reilly for political and financial reasons. The evidence will be put forth shortly and is irrefutable.”

Color Of Change launched a petition to pressure advertisers, which was signed by 340,000 people, and that’s miniscule in my book.

Color of Change held protests outside Fox News headquarters and geo-targeted Fox New headquarters and affiliates with digital ads that share a phone number to confidentially report harassment.  Color Of Change cautions that the fight for a fair workplace at Fox News is hardly over.

Sources inside Fox News cited loss of ad revenue as a central reason for firing O’Reilly, this attack followed the same model that Color Of Change used to push Glenn Beck off the air in 2011, escalating from behind-the-scenes pressure on companies to public pressure if companies did not drop their ads and was instrumental in getting O’Reilly off the air.  And no, I’ve never been a Beck fan.

Remember Roger Ailes?  He was the founder and chief executive of Fox News, and he resigned from his position under fire, but will remain with the company until 2018 as a consultant for Fox News’s parent company, 21st Century Fox.  Gretchen Carlson was the accuser in Ailes demise.  Despite the fact that Ailes and Murdoch were long time close friends, Murdoch’s sons and their wives won out against Ailes as well.

The Truth of the Matter

Rick Wells explains it ever so well in his recent article, O’Reilly Forced Out – Leftist Agitators, MSM, Pressure On Advertisers Did Him In.  Rick is right when he states,

Of course, that supposed “evil man” never had his day in court, he was tried by tweet, email, “news” articles and public pressure and wasn’t allowed to offer a defense. His leftist accusers were given inches and they ate up the miles. Just as the policy of “strategic patience” was an open invitation for bad actors like North Korea to continue to misbehave, the policy of settling lawsuits to prevent more has the opposite effect. It’s a neon sign that says “Lawyers and Opportunists Welcome.”

At age 86, Rupert is not going to last forever, and his two sons, who are socialist democrats, will totally destroy Fox News.  What was once our only hope of media truth, will be just like the rest of MSM.  Fox is the network that supported Trump, the only one!

There’s blood in the water, and you know who the next target will be…Sean Hannity, the attack is already on the horizon.  Then they’ll target Janine Pirro, Tucker Carlson, and of course, Lou Dobbs.  Napolitano has been slammed time and again, but thankfully, he keeps coming back!

What’s left is not very appealing to any conservative…leftist homosexual, Shepherd Smith, Juan Williams and his socialist pronouncements, the always laughable Geraldo Rivera, and the ever besotted, Bob Beckel.

What has been done to countless conservative organizations is the same thing that is being done to President Trump and his administration, and I exposed it in my recent article, Time to Tell Political Correctness to Take a Hike.

Soros’s organizations rattle their sabers and the republicans run for cover; they cave!  This has to stop!  They need to have the chutzpah of Ann Coulter who has stood her ground with Berkeley as to when she will give her speech.  The only way we win is by never retreating.

The left will keep using this same rotten tactic until the right learns to ignore them and weather the storms.  Blood in the water draws more sharks, and this won’t end well for Fox News or for American constitutionalists.

I’d like to see these true conservatives get together with Breitbart and start their own network, one that isn’t “fair and balanced” with mostly liberals, but one that is truly Constitutionally conservative.  Bet me, it would bring in billions.

P.S. For many years now, the editor of NewsWithViews, Paul Walter, has worked to bring us articles from some of the finest research journalists in America.  Every morning we wake up to three or four amazing columns that keep us informed.  Despite the economic downturn of the last dozen or more years, our editor strives to keep NWVs at the forefront.  Much of the cost comes out of his own pocket, all because of his love for America.  Few people realize the time and funds it takes to do this.  So, even if it’s only a few dollars, please help us keep NWVs alive and well.  Any amount is appreciated, and you can send donations here.  God bless!  And keep reading!