Just reporting this morning August 23, 2021, “FDA grants full approval to Pfizer/BioNTech Covid-19 vaccine, opening door to more vaccine mandates.” Every awake American was waiting for this shoe to drop. For eight months, millions of Americans had “voluntarily” taken an “unapproved” mRNA experimental injection and thousands have already died or been permanently injured for life. This FDA approval will be used to shift from “voluntary compliance” to “forced inoculations.”

Up until now, no governmental body had any authority to “force” (mandate) vaccinate anyone. It was all allegedly “voluntary” even though the effort to conceal all real related science has been immense, and everything from coercion to bribery was used to gain “voluntary compliance” from people who had no means of providing any “informed consent.”

So, until now, they have worked closely with global Marxist collaborators in BIG Pharma, BIG media, BIG international corporations, universities and even small “Christian colleges” like NO-HOPE COLLEGE in Michigan, to essentially “force vaccinate” via bribes or under threat of lost wages and income, kicked out of classes, and even threat of incarceration in a mental facility for making your own medical decisions.

As I have stated a number of times now in previous columns, NO ONE HAS ANY RIGHT TO FORCE INJECT ANYONE WITH ANYTHING AGAINST THEIR WILL… Not even your own doctor has any such Right. In the end, neither did Dr. Josef Mengele or Dr. Kevorkian.

An FDA approval under extreme duress, does nothing to alter or eliminate this freedom and liberty fact! If you think it’s just another amazing coincidence that Pfizer has the contract to VAX our Military, you’re still kidding yourself!

The Fourth Amendment to the U.S. Constitution guarantees every Citizen the Right to be “secure in their person.”Everything in the Declaration of Independence, U.S. Constitution and Bill of Rights stands as adopted many years ago. It’s time for Americans Citizens to enforce it all again! It’s a matter of life and liberty!ALL efforts to “force medical mandates” are unlawful and unconstitutional.

It just so happens that Pfizer is the first to be “approved under duress” by the FDA. It also happens that the U.S. Department of Justice hit Pfizer with the biggest Pharma settlement in history back in 2009 for intentionally misleading the public in its advertising. It remains the biggest “health fraud” settlement in history, even today…until the next case involving COVID injections,which even Pfizer’s own CEO hasn’t taken.

Before the CDC started manipulating VAERS Reports to cover up a growing number of deaths occurring “post-vaccine” several weeks ago, more than 53,000 U.S. “post-vaccine” deaths had been reported by attending physicians all across the country. READ THE REPORTS HERE This number is highly likely to eclipse more than 100,000 Americans dead today, following one of the most lethal injections in history, just since January.

Post-vaccine deaths have been happening at a rate much greater than any real COVID19 deaths. But every agency in bed with the Federal Government has worked around the clock to bury these reports and deny that any such deaths have even taken place.

Israel is the most vaccinated country in the world, and they exclusively used the Pfizer vax. Israel is also experiencing the greatest number of post-vaccine deaths and illnesses in the world, as of today.

Israel was the first country in the world to “mass vaccinate” its entire population under a contract signed with Pfizer on January 6, 2021… It’s also the first country experiencing the worst “post-vax” deaths and illnesses in the world, since COVID19 showed up in January of 2020. Israel is on their FOURTH round of Pfizer VAX after none of the previous rounds solved the problem and has made matters much worse.

No matter whose science you choose to follow or, whether or not the FDA approves any of them under extreme duress and massive corruption, the fact remains — NO ONE HAS ANY RIGHT TO FORCE INJECT ANYONE WITH ANYTHING AGAINST THEIR WILL… 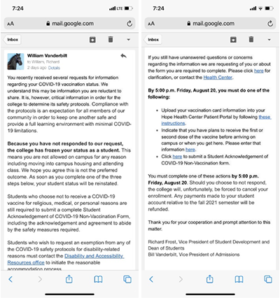 We either STAND TOGETHER NOW in a nationwide STRIKE FOR FREEDOM and end this madness, or the USA and entire world WILL collapse in just a matter of days or weeks. Don’t say you were not warned!

NO HOPE COLLEGE DICTATES – and there are others

It’s NO COINCIDENCE that NO-HOPE College engaged in “coercion” with a drop dead order for 5PM Friday August 20, 2021 – with the FDA approval set to be announced on Monday August 23, 2021.

It’s especially true in the case of NO-HOPE College, as William Vanderbilt is reportedly set to take a new position working directly with the Biden regime.

We either STAND TOGETHER or FALL TOGETHER, RIGHT NOW! Choose carefully and quickly!