In the United States, there exists a massive Jihadi support network led by the Muslim Brotherhood/Hamas [a Palestinian movement deemed by the U.S. as a terrorist group] and used by jihadis raised here in America, or those who come in from overseas. According to evidence in numerous federal terrorism trials, the largest Islamic organizations in America are fronts for jihad and controlled by the Brotherhood. —John Guandolo

The internet is rife with inane theories regarding the Las Vegas massacre which resulted in 58 dead and over 500 wounded.  After only a few weeks, the media has all but dropped the story, and our government assures us this attack had nothing to do with Islamic terrorism.

The truth about the Mandalay massacre comes from Islamic expert, John Guandolo, President and Founder of Understanding the Threat (UTT).

Guandolo is a US Naval Academy graduate, served as an Infantry/Reconnaissance officer in the United States Marines and is a combat veteran. He was a combat diver, military free-fall parachutist, and a graduate of the U.S. Army Ranger School. Mr. Guandolo served as a Special Agent in the FBI from 1996-2008, and was recruited out of the FBI by the Department of Defense to conduct strategic analysis of the Islamic threat.  Here is his impressive and full curriculum vitae.

John is also the co-author of Shariah – The Threat to America, the first comprehensive book on the enemy threat doctrine, and the author of Raising a Jihadi Generation (September 2013) which details the Muslim Brotherhood’s jihadi support network inside the United States, a book every American needs to read.  There are few genuine experts who understand the Islamic threat; John Guandolo is one of them.

The UTT staff also includes Chris Gaubatz who infiltrated the Council on American-Islamic Relations (CAIR).  His amazing story is told in the book, Muslim Mafia.

The Truth of the Mandalay Bay Massacre

Las Vegas law enforcement and the FBI still can’t find a motive for Steven Paddock’s slaughter.  Yet, in my short interview with John Guandolo, he clarified why the conclusion must be that the Islamic State is responsible.

There is no validity or proof that there were shots fired at other casinos, this is internet fake news. 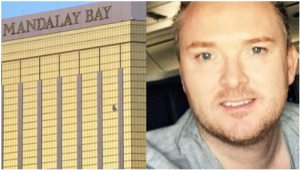 Mr. Guandolo said the authorities should be looking closely at Brian Hodge who stated he was in the room next door to Paddock.

Hodge, who is originally from Wagga Wagga, South Wales, Australia, but has lived in Los Angeles for the past eight years, described seeing the SWAT team storm the hotel. He also claimed the entire floor he was staying on was a “crime scene” with “multiple shooters” firing weapons out of the windows.

He also claimed on twitter that he was in the room “next to Paddock” in 32134 at the Mandalay Bay.  Yet, evidence reveals Paddock was firing from rooms 32135 and 32134.  Hodge also told Australian media outlets he was on the 32nd floor of the Mandalay Bay when the attack was in progress, and then fled to bushes near the hotel where he remained for 3 1/2 hours.

The story he told the media is strange and inconsistent with the facts.  See/hear his interviews here and here.  Yet, Brian Hodge has not been interviewed by the FBI or the Las Vegas Sheriff’s Office.

Mr. Guandolo said UTT had studied the statements of Hodge, and there were too many discrepancies.  He possibly could be the other shooter, and should be looked at closely, which unfortunately, is not happening. 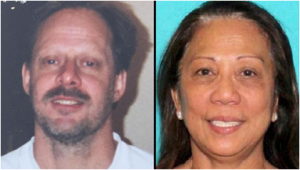 Steven Paddock’s girlfriend retained a criminal defense lawyer upon her return to the United States from the Philippines.  Marilou Danley, 62, is being represented by attorney Matthew Lombard of Lombard Law.

Lombard, a criminal defense attorney for more than 12 years, operates his own firm out of Los Angeles, California. Lombard worked on the defense for Terry Nichols, an accomplice in the 1994 Oklahoma City bombing, according to his professional biography.

According to John Guandolo, both Marilou Danley and Brian Hodge should be run to ground and questioned over and over again by the FBI and local law enforcement.  Guandolo believes Marilou Danley knows more than she’s telling.

Could the investigation into this horror become more bizarre and unprofessional?  The public suspects a coverup, and the preponderance of evidence points to ISIS.

Guandolo’s experience gives him insight into the truth.  In 1998, Guandolo was with the FBI investigating the Nairobi bombing of the US Embassy.  He also worked 9/11 and related al Qaeda cases out of the bureau’s Washington field office.  And, after 9/11, John began an assignment to the Counterterrorism Division of the FBI’s Washington Field Office developing an expertise in the Muslim Brotherhood, Islamic Doctrine, the global Islamic Movement, and terrorist organizations including Hamas, Al Qaeda, and others.

John was designated a “Subject Matter Expert” in 2006 by FBI Headquarters and created and implemented the FBI’s first Counterterrorism Training Program focused on the Muslim Brotherhood, Islamic Doctrine, and the global Islamic Movement.  He knows the workings of the Department of Justice, especially the FBI.

Quandolo stated, “The way the FBI is postured is that Las Vegas is not the Islamic State, and they’ve been wrong all the way back to Ft. Hood.”  He said the FBI always failed; they don’t understand the threat.

One of John’s colleagues asked another FBI agent just how many understand the Islamic threat.  The answer was, “Probably ten out of 14,000 agents, and half are not even in the counterterrorism unit.  There are none in leadership who understand.”

The primary Islamic advisors regarding the Islamic threat who are inside the White House, State Department, CIA, FBI, DHS, national security staffs, and others are Muslim Brotherhood (MB) operatives or Muslims ideologically aligned with the Muslim Brotherhood. John clarified that the average FBI agent hasn’t any training in how to question Islamic suspects using sharia which Muslims would understand.  The hired Islamists within the DOJ are ones who do the translating.

When valid information on Islamic terrorism is put out by anyone inside the DOJ, NSA, or DHS, it is either shredded or the person is fired.  The entire Muslim Brotherhood network led by the likes of The Islamic Society of North America (ISNA), Muslim Public Affairs Council (MPAC), CAIR, Muslim American Society (MAS), and the US Council of Muslim Organizations (USCMO) are the first to complain if anyone in US intelligence should utter the truth of Islam or stealth jihad.

See Something, Say Nothing, is the tell-all book by Philip Haney, a former Homeland Security Officer, who exposed the government’s submission to jihad, especially under President Obama. The DHS ordered Haney to scrub records of Muslims with terror ties.

I asked John if there was anyone left in the Trump administration who knew the real threat of Islam, and he said, “Other than the President, no one.”  They’ve been fired or have quit.

There are three military men within the Trump administration, and unfortunately none of them really understand the Islamic threat.  Lt. Gen. McMaster of the NSA is the one most loved by the Islamists and leftist Democrats and Republicans like John McCain.

Guandolo warned us that Lt. Gen. McMaster is in the enemy camp.  McMaster had even demanded that President Trump refrain from telling the truth about Islamic terrorism.  McMaster targeted and terminated the Trump loyalists in the National Security Council (NSC) who were hired by General Flynn because they knew the Islamic enemy, and were loyal to the MAGA agenda, they included Cohen Watnik, Rich Higgins, Derek Harvey, and Victoria Coates.  The latter is still in the White House but no longer in the NSC. She is truly another superstar.

Worthy to mention is General Kelly’s statement about the budget where he told the Senate, as he defended President Trump’s new budget, that the budget cuts some anti-terror grant funding for localities.

Really?  They want to cut funds after all the attacks, including Orlando and Las Vegas???

Twelve years ago, Muhammad Khalil al-Hakaymah wrote The Myth of Delusion, Exposing the American Intelligence.  It is an al-Qaeda document released on the Internet and distributed via a jihadi email list.  It is a long treatise exposing America as a paper tiger, and the CIA, FBI, DOJ as useless.  John Guandolo says they nailed us!  UTT’s website lists a number of important jihadi writings under Research and Resources.

According to Guandolo, America fails to win the war on terror because the U.S. government takes advice from the enemy:

“When we can demonstrate that one hundred percent of the advisors—Islamic advisors at the Pentagon, the White House, the FBI, the CIA—are Muslim Brothers or…part of the Muslim sisterhood, but primarily Muslim Brothers, and those are the people that we’ve relied on to advise us on how to fight the war, both overseas and domestically our counterterrorism strategy, that would explain why we’re getting thrown all over the map and why we’ve been getting…the floor mopped up with us for the last 15 years.”

It would be impossible for me to relate all the information within a 35-minute interview that is spelled out so thoroughly on Guadolo’s website, Understanding the Threat.  I would hope that my readers spend afternoons absorbing the information on this amazing site.

Guandolo’s FBI joint terrorism training in 2006 laid out what sharia and the Islamic network is about.  He now has a three-day program for law enforcement, military and intelligence professionals that is a fact-based analysis of jihadi operations, their doctrine, and the significant jihadi network that exists in the U.S. today.

Those who attend will understand the broad scope of the threat, how it directly affects them in their daily duties, and how they can combat this threat at the local level.

I would urge all my readers to contact their local county sheriffs and speak to them about John Guandolo’s presentation, and urge them to contact John for training.

There are many threats in America today, but by far Islam is at the top of the list. Infiltration has kept our government from ignoring the threat.  It is up to us, the American citizens who wish to keep our culture free of Islamic domination to fund those who are leading the charge against Islam.

Please help John by funding his efforts.  Click here and then on donate.  It takes you to Americans for America (A4A), a 501(c)3 group that partners with Guandolo.  If you donate through A4A to Understanding the Threat, it is a tax-deductible donation, and a donation that will help to save America, her culture, her Constitution, and her freedoms.  Please help!