Part 1 of this series recalled some brutal events in history where threats and legal constructs were used to silence people who expressed different goals in politics, social conditions and the principles of authority and freedom. This is why the newly created Homeland Security Disinformation Governance Board is questionable and extremely troubling.

We must either allow diversity of opinion to reign or we, ourselves, will fall at the hands of the only available tool – brute force.

This is not new. It has happened before and will again. As the abolitionist, Wendell Phillips, told us, “Eternal vigilance is the price of liberty; power is ever stealing from the many to the few.”

In our own early American history, Congress passed the Alien and Sedition Acts at the behest of the Federalist Party and President John Adams. The ruthless enforcement of these statutes, by government authorities, stifled disruptive voices, instilled fear and led to the threat of arrest and detention for editors who criticized the president.

Thomas Jefferson, the freedom-loving republican, was the man who quickly repealed these unjust laws when he became President. America’s uniquely libertarian approach to free speech has emerged from a long struggle to hear all voices and achieve civil rights and racial equality which exist in statute in America today.

Yet, with President Biden’s new Disinformation Czar, we again realize the weight of the federal government can be turned against any person or private business, at any time, in any manner. The leftist main-stream media outlets will continue to foment division through political pandering and aggrandizement. These facts are now well known. The media pushed the Russia collusion hoax, the Jussie Smollett hoax, they smeared Justice Thomas, Justice Kavanaugh and Nick Sandmann, and they dismissed Hunter’s laptop affair as Russian disinformation.

Throughout history, we have many examples like these. Stories of those who understood both their historical circumstances and legal rights. People stood firm on their principles. The founding patriots openly published their opinions about King George III and the “gross corruptions of his Parliamentary Junto” and we should follow their example.

Stephen Solomon, the author of, Revolutionary Dissent: How the Founding Generation Created the Freedom of Speech, describes details of an era where Americans,

“used every form of expression imaginable to deliver their ideas and arguments. They created songs, essays, letters, cartoons, broadsides, woodcuts, appeals, petitions, resolutions, puns, poems, plays, paintings, and pamphlets. They belittled their foes with parody and satire and launched diatribes, harangues, and accusations against them.”

This was the colonial equivalent of the technological whirlwinds that surround us. It is a mistake to believe that modern technology has cultivated a more thoughtful understanding of alternative viewpoints. It has not.

Instead, Big-Tech is focused on sponsoring, promoting and creating algorithms that artificially rank their preferences above alternatives. At the same time, these filters limit access to straight news and stifle public awareness while pushing left-wing agenda driven stories.

Of course, legitimate news organizations exist. However, clicks are generated on the social-media side of the equation. This is where loyal fans are created, market-share is gained, and money is made.

Followed by a clever re-writing of word definitions, these destructive ideas create a cultural malaise without people realizing their vocabulary has been stolen (i.e., define a woman.)

The Twitter limit of 280 characters means the details of any issue, the pros or cons, must get pushed first through a mental sieve of our own making. Like Big-Tech, most individuals using Twitter are incentivized to prioritize their comments based upon size, emotive draw and potential for cultural wave-making; not on truth telling.

We ask, where will truth come from? Does it come from wisdom, understanding and the balancing between costs and benefits? Or, from public momentum? Is this how SCOTUS will decide the Roe v. Wade debate? Will, true or false, get declared by the newly created Disinformation Czar? 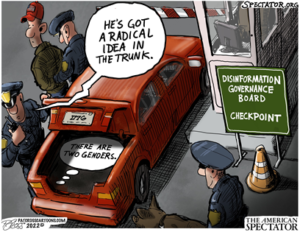 We see powerful social engineers and academic policy pundits using statist power to exert public control without any limits or boundaries. These idealogues are willing to cancel, quarantine, and re-educate anybody who disagrees. In fact, F.A. Hayek, in his book, The Road to Serfdom (1944), notes that social and industrial planner Henri Saint-Simon, thought those who did not obey his proposed planning boards would simply be, “treated as cattle.”

Today’s coercive tendency of big-government and the incessant and unwarranted passion for collective intervention is fracturing our national foundation. Our nation used to care about the little guy, the working class, and the underdog. Today these have been replaced by the “greater good” – the authoritarian state.

There is only one path for citizens to maintain their title to personal freedom, freedom of religion, of property, of speech, of the press, and the God given right to self-protection. Thomas Jefferson, told us how: “In questions of power, then, let no more be heard of confidence in man, but bind him down from mischief by the chains of the Constitution.”

This is the bedrock of the American Republic.

The current onslaught of totalitarian actions and legislative malfeasance is widening the gaps between personal freedom and government control. We see censorship and mass political indoctrination sprouting in all areas of private life. As F.A. Hayek noted, the social engineers plan for,

“us to take our pleasures as well as other necessities at the appointed time… and in the prescribed form … depriving us of choice, in order to give us whatever fits best into the plan … at a time determined by the plan.”

To get out of the cattle-pen, people must act now to lift their voices in the public square. To this end, free and fair elections must be our highest universal goal. Election Integrity is our pathway to true representative government.

Auditing election results is the first step needed, but it is not enough. Audits come after the fact, like the police investigation after a murder, it is too little, too late. For Oregonians, the real battle must be to ensure election and voting integrity before election crimes are committed.

In Part 3, I will outline some disturbing details of several detrimental statutes that have been strategically placed like wedges into the bedrock of Oregon’s election integrity. Lastly, I’ll explain why the decades of Oregon’s unending one-party rule must be brought to a close.

About the Author: Dennis Linthicum

Dennis Linthicum represents the citizens of Senate District 28, which includes all, or part of five rural, mostly-eastern Oregon counties: Jackson, Klamath, Lake, Deschutes and Crook. As Senator of one of the largest Senate districts in our state, it is extremely important that my constituents remain in contact with me about the issues and concerns that affect their lives. You and I must work together to protect the common interests of rural Oregonians.