White House Chief of Staff General John Kelly said he was stunned and left brokenhearted by a congresswoman’s criticism of President Trump’s call to the widow of an Army sergeant killed in Niger. General Kelly said the president had expressed his condolences in the best way that he could.

Anyone who stands for freedom, honor, truth and righteousness in America today is reviled, denigrated, and denounced.  At the top of the list is our President, Donald J. Trump, and his Chief of Staff, General John Kelly.

President Trump’s empathy is well known.  Not only is he kind, but also extremely generous.  The left hates our president and those of us who voted for him.  The right hates him for many of the same reasons, but also because he’s not part of the cabal’s agenda.  Making America great again is repugnant to both Republican and Democrat New World Order goals.

As a result, the attacks on our president, and now his Chief of Staff, have become bitterly scathing. The enemies of freedom will do anything to sully the countenance and reputations of these good men, and keep them from succeeding.  But they can’t, because American patriots support them.

On October 30, Laura Ingraham debuted her show on Fox News.  Her first guest was General John Kelly.  She didn’t ask any hard questions, and like so many other Fox News hosts, she interrupted the guest’s answers…answers we wanted to hear.

I thought the General answered the softball questions perfectly. Ingraham asked about the pictures of George Washington and Robert E. Lee being removed from the very church Washington once attended.  The General stated that both George Washington and Robert E. Lee were honorable men, and that now we have a lack of appreciation for history and it should not be destroyed. He stated that Robert E. Lee gave up his country to fight for his state of Virginia, and back in those days it was always loyalty to state first.  He said the lack of ability to compromise led to the civil war and men and women of good faith on both sides made their stand where their conscience guided them.

Of course, the MSM refuses to give their audience any true historical documentation.  Both Washington, the Father of our Country, and Robert E. Lee were Christian men, honorable and courageous.

The NY Times attacked the General for stating American history should not be destroyed and even insinuated he was a racist, and of course the entire MSM attacked with the same inane reasoning.

Rep. Luis Gutierrez (D-IL), called Kelly a “disgrace to the uniform” in an interview with The Washington Post, and then refused to apologize.

Ingraham also asked the General about Democrat Congresswoman, Frederica Wilson’s actions, and Kelly commented how it had affected him.

Democrat Frederica Wilson has proven herself to be one of the leftist antagonists who has stooped to the lowest level in order to attack our president’s condolence call to the wife of La David Johnson.

White House press secretary Sarah Sanders called Wilson’s criticism “appalling and disgusting” and accused her of “politicizing” the issue. She said the call wasn’t recorded but other White House officials, including Chief of Staff General John Kelly, were present during the call.  (And from now on, I’d record those calls.)

Yes, they died, and not because of our President, Donald J. Trump, they died because of Obama’s Islamic appeasement, something Frederica Wilson doesn’t want to face.  Staff Sgt. Bryan C. Black, 35, of Puyallup, Wash.; Staff Sgt. Jeremiah W. Johnson, 39, of Springboro, Ohio; Sgt. La David Johnson of Miami Gardens, Fla.; and Staff Sgt. Dustin M. Wright, 29, of Lyons, Ga. were killed in the attack by Islamists.

President Trump did not have these soldiers in Niger without a direct combat role.  It was Obama’s idea to put American soldiers in harm’s way without going on the offensive, and he’s done the same thing in Iraq and Syria.  The soldiers were being deployed without a combat mission into war zones.

Here is the letter from the Obama White House which shows exactly what Obama had said, “The recently deployed forces have deployed with weapons for the purpose of providing their own force protection and security.”

They were supposed to be playing defense, not offense. The deaths in Niger also had deeper origins in Obama’s pro-Islamist policies and alliances.  Daniel Greenfield’s article on Niger and Obama exposes Obama’s leniency on the Islamists and his lack of care for American soldiers.

Greenfield spells it out perfectly:

If you want to look for the bullet that killed those men, look no further than Obama’s Cairo speech.

Their deaths should be a reminder that appeasing Islamists always ends in war and death. If the Democrats don’t want war and death, they should end their backing for Islamists and empower our soldiers to defend themselves.

Frederica Wilson was with Myeshia Johnson, one of her constituents, and the widow of Sgt. La David T. Johnson, when President Trump called Mrs. Johnson to express his condolences. Johnson was killed earlier this month during an attack in Africa.  Wilson said she heard the conversation on speakerphone.

The Congresswoman claimed that, during the call, Trump did not use the soldier’s name, and informed Johnson that her husband “knew what he signed up for … but when it happens, it hurts anyway.”  Her statement is hogwash, and Americans know it.  We have a president who is truly for the people, and one whose empathy outshines many of those who came before him.

General John Kelly clarified in his speech that calls are made to the widows to arrange convenient times for a condolence call from the President of the United States.  Few presidents choose to actually call widows, they write letters.  General Kelly told this to our president, but he chose to make personal calls.  The softness of our president’s heart to those who have experienced great loss is so evident in everything he does.

But this time, the wife called her democrat representative to be there when Trump made the condolence call, which makes me wonder, especially since Frederica Wilson has often voted against legislation that would help veterans and their families, including financial help, according to VoteSmart.org, a site that tracks voting records.

Specifically, she opposed a measure that would have given the families of four soldiers who were killed in Afghanistan in 2013 death and burial benefits.

She has also opposed measures to reform the embattled Department of Veterans Affairs.  And Wilson has voted against measures multiple times that would ensure veterans and their families would still receive benefits despite government shutdowns. 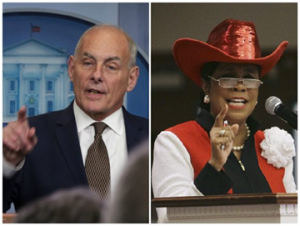 Chief of Staff John Kelly was horrified at the comments made by Congresswoman Wilson regarding the president’s condolence call to the wife of Sgt. La David Johnson of Florida.

How very sad that Mrs. Johnson felt she had to contact her liberal Democratic congresswoman to listen in on the prearranged condolence call from our president.

General Kelly was appalled at Congressman Wilson’s politicization of this tragedy and her attempt to damage our president’s reputation.  Few past presidents have taken the time to make sympathy calls to the spouses of soldiers who have given their lives, and as Kelly says, that is nothing against them, a letter is fine.

Chief of Staff Kelly felt he had to respond to this attack. In his touching speech, he first explains what happens when a soldier is lost, and their final trip home.  Kelly mentions the movie, Taking Chance with Kevin Bacon, the true story of a 19-year-old soldier killed in Iraq and his final journey home.

When General Kelly came to work the day after the president’s condolence calls, he was stunned and heartbroken with what Congresswoman Frederica Wilson had done by listening to and then politicizing the call to Sgt. Johnson’s wife.

Kelly said he thought that at least the private phone call was sacred.  He said when he was a kid growing up, “a lot of things were sacred in our country.”

Women were sacred and looked up to with great honor, and that’s obviously not the case anymore.  Life, the dignity of life was sacred, that’s gone.  Religion, that seems to be gone as well.  Gold star families, I think that left in the convention over the summer.  But I just thought the selfless devotion that brings a man or woman to die on the battlefield, I just thought that that might be sacred.  And when I listened to this woman and what she was saying and what she was doing on TV, the only thing I could do to collect my thoughts was to go and walk among the finest men and women on this earth.  And you can always find them because they’re in Arlington National Cemetery.

The left will never concede that they lost the election, that Hillary Rodham Clinton was rejected by the American people.  Actions like those of Congresswoman Wilson are despicable, but are done to smear our president and his people.  President Trump’s choice of John Kelly as Chief of Staff is a perfect one, and we’re glad he is at our president’s side.  Ephesians 6:10-17

P.S. Folks, the real truth will never be heard from the main stream media.  NewsWithViews is where reality comes into your mailbox every morning.  The wonderful folks who write for this website do it because they love America and want her to be great again.  They do it simply for love of country without any remuneration.  To keep NWVs alive and well, we count on monthly donations.  Please help us.  You can send your donations here.