I know that I am leaving the winning side for the losing side, but it is better to die on the losing side than to live under Communism. Whittaker Chambers

No one should suffer from the great delusion that any form of communism or socialism which promotes the dictatorship of the few instead of the initiative of the millions can produce a happier or more prosperous society. Charles E. Wilson

There is way too much wrong with this bill!  Money goes to Planned Parenthood to murder more of our unborn, money continues to go to sanctuary cities to hide illegal alien criminals, there is no money for the border wall so our sovereignty is still nonexistent.  We fought like hell to send all these republicans to Congress and they act like Democrats because our President isn’t one of “them.”

Pence called the deal a “bipartisan win for the American people.”  Who the hell is this globalist ass kidding?  Oh yeah, we know he’s one of them and chummy with the Republicans who hate Trump, and we haven’t fallen for his phony Bible thumping.

Chuckie Schumer thinks they’ve had a massive victory, and perhaps the above Chambers quote would seem to be true, especially with the aid the republicans are giving to the democrats to thwart everything Trump promised in his campaign.  Even without the Conservative Caucus vote, this rotten piece of legislation may pass.

I don’t want our side to be the losing side; I want us to win, but to do that, we have to let the criminals in Congress know we mean business.

I want the wall built, I want the influx of non-vetted refugees from known terrorist nations stopped, I want sanctuary cities defunded, I want Obamacare repealed, and I want taxes lowered across the board!

No one person helped Donald J. Trump get elected, certainly not Jared Kushner as some have proclaimed.  The only reason Trump is in our White House is because the American people heard him echo what they themselves wanted, and they responded with massive votes.

So, let’s take a look at where we stand on these issues, even though there are far, far more, and see who is blocking our President and ultimately THE AMERICAN PEOPLE!

Most of the billions of dollars in cash sent to Mexico by Mexicans living in the U.S. is transferred by “undocumented” workers, read illegal aliens, and the total topped $26 billion in 2016, according to research by the Washington institute Inter-American Dialogue.

While services have expanded, the cost of sending money to Latin America and the Caribbean has dropped to below 5 percent of the transfer amount.  Time to raise it.  Do the addition, if it’s raised to 7 percent, that extra 2 percent would bring in $520 million in one year.  Surely in a number of years the wall would be paid for, so what’s the hold up? Haven’t we given enough taxpayer aid to illegal aliens?  How about getting some of it back to build the wall?

House Speaker Paul Ryan and Senate Majority Leader Mitch McConnell said that the cost could range from $12 billion-$15 billion.  Surely businessman Trump could beat that price.  The likes of McCain, Murkowsky, Corker, Cornyn, Lankford, Amash, and others of the same ilk are fighting our president tooth and nail.  They have a million excuses for allowing our southern border to remain a sieve.

And according to Rush Limbaugh they’ve actually laughed at Trump’s belief that he’ll get the wall.  Maybe they’d best call China and ask them to tear down their wall, after all, it isn’t fair to illegal aliens. 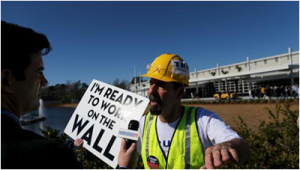 Mr. President, the Constitution and the law is on your side for your travel ban.  You have the authority to stop these judges from delaying your executive orders regarding who enters our country.  The majority of these judges have been put in place by Democratic presidents.  Carter, Bush, and Obama appointed the three 9th circuit court judges who upheld District Judge Robart’s stay on Trump’s first EO.

Obama appointee Judge Theodore D. Chuang ruled that the purpose of the President’s first travel ban, and also his revised travel ban, was to discriminate against Muslims for political reasons and the ruling cited Mr. Trump’s own campaign words against him.  What hogwash!

What these judges do not understand is that this is not an executive order against a religion, but against a worldwide political movement that carries with it hatred for infidels, or non-Muslims.  Hundreds of thousands of non-vetted refugees have entered this country, and they have no desire to assimilate.  One needs only to look at Europe today to understand why Trump’s EO’s should stand.

Article 1, Section 8 of the Constitution gives Congress the power to regulate immigration. In 1952, Congress passed a law empowering the president to deny entry into the U.S. to “any class of aliens” considered to be “detrimental to the interests of the United States.”  In other words, a threat to America and in the interests of national security.  And that is exactly what our President is trying to do!  He wants to stop the threat!

The Supremes like making law, don’t wait on them, use the law you now have that previous presidents have used, and move ahead. 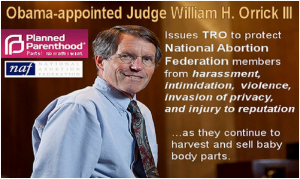 Judge William Orrick was appointed by Obama, in 2012, to the position of US District Judge for the Northern District of California.  This leftist ruled that the US government can’t withhold federal funds from sanctuary cities.  Orrick raised a couple hundred thou for Obama, and he also blocked the release of the underground recordings of Planned Parenthood, in which the sale of harvested organs from aborted babies was openly discussed.

Attorney General Jeff Sessions and the U.S. Department of Justice had sent warning letters to nine jurisdictions which were identified in a May 2016 report by the Department of Justice’s Inspector General as having laws that potentially violate 8 U.S.C. § 1373 a/k/a “sanctuary city policies.”  Link

The administration says sanctuary cities allow dangerous criminals back on the street and that the order is needed to keep the country safe…think of Kathryn Steinle and others murdered in “sanctuary” cities.  These sanctuary cities, like Portland and Berkeley are ripe for leftist violence, and are “safe spaces” for total censorship of free speech.

Again, the law is usurped by these judges, and again it will probably end up in the supreme court…which means more American citizens will die in these cities before a ruling on the law which already exists to protect us, comes down from the high court.

Conservatives were thankful that RyanCare failed.  What Trump supporters wanted to know was why Paul Ryan was allowed to put forth something that still had the stench of Obamacare, and expect the shrinking middleclass to like it.

RyanCare 2.0 was not worth passing, and would have been political suicide for the Republicans.  We want Obamacare repealed completely, without any fixes.  Just get rid of the damned thing!  Put those few who needed Obamacare on Medicaid for the interim while the free market adjusts.

Representative Jim Jordan, Chairman of the House Freedom Caucus, along with 30 of the most conservative members of Congress, said RyanCare didn’t go far enough, and they were right.  It didn’t, and that’s why they were against it!  The members are very pro-life and against Planned Parenthood, but RyanCare simply did not defeat enough of Obamacare.

Jordan was interviewed by Chris Wallace who attacked him for not passing the RyanCare bill and repeated what Speaker Ryan had said, “We’re now stuck with Obamacare for the foreseeable future.” Jordan stated that only 17% of Americans were actually for the “American Health Care Act.”

Even the evil United Nations is warning the Trump administration in a bizarre letter that repealing the unconstitutional ObamaCare takeover of health insurance may violate what the UN likes to call “international law.”

Repeal, without any replacement is the only answer!

Speaker Paul Ryan is claiming that the failure of RyanCare will now make tax reform much more difficult.  White House budget director Mick Mulvaney and Treasury Secretary Steven Mnuchin both had essentially the same message.  However, plans for tax reform, job creation, trade deals, and infrastructure spending remain intact regardless of what happened to the health care bill.

That admission shows how tough it’s been for Trump to get any major legislative victories, and the Republicans have offered none to speak of. In spite of Republican control of Congress, Trump and GOP leaders haven’t been able to move forward on significant legislation. It is simply because the majority of Republicans are more in bed with their democrat so-called adversaries than with their Republican President.  The push for healthcare reform hit the wall when both moderates and conservatives balked at the bill as presented, and hill Republicans concede that comprehensive tax reform may be harder to accomplish!

What a bunch of poppycock.  I never saw one thing Obama wanted to be difficult for him to pass even when the Republicans won back the House in 2010 (and assumed control in January 2011), and won back Senate control in 2014 (assuming control in January 2015).  They still gave Obama everything he wanted or they would have been called “racists” by the Socialist media.  So, they ran scared and caved.

We have a president who made promises to the American people, who resonated with the middleclass and grassroots, who told them what he wanted to do, and the NeverTrumpers in his own party are making new legislation just as difficult for him as the communists in the Democratic party.

We’ve hit the first 100 days, and Lou Dobbs made it clear when he said, “Speaker Ryan, working against the President and his agenda at every turn, frustrating the entire GOP conference and indeed the American people. President Trump has been gracious, he’s been generous, even, with the inept Ryan, but the President today, acknowledging that he is disappointed.”

Folks, it has always been up to us.  Electing a president you like doesn’t mean that one man alone can fix it all.  The entire congress needs to be cleaned out and replaced at nearly every election if they don’t follow the Constitution.  Unfortunately, we now have several generations who have not been taught the Constitution and are illiterate when it comes to understanding our government and even our voting system.

Still, it is up to all of us.  We must make our voices heard, just as we did when we elected Trump.  That means calling the White House and the damnable traitorous filth in Congress, it means emailing your senators and representatives.  It means we have to harass them into doing what we voted for, Donald Trump’s campaign promises!

Capitol Switchboard for your Senators and representatives 202-224-3121

Bottom line folks, it’s up to we the people.  So, get off your backsides and get busy!

P.S. Dear constant readers…The editor and owner of NewsWithViews works tirelessly to bring you some of the finest researchers in America and worldwide.  It’s a heartfelt desire by our publisher to save our beloved country.  It takes time and money, and we need your constant help.  Even a few dollars a month keeps the costs down.  Keep NWVs coming into your mailbox by sending your donations here.