In the midst of a deadly and confusing pandemic from China known as the Coronavirus of COVID-19, The Deep State Democrats appear to be consumed with using the tragedy to hurt President Donald Trump while having the federal government pouring billions of taxpayer dollars into the so-called Blue States.

However, not everyone in the practically locked-down government are forgetting the Democrats impeachment attempts and the news media’s water-carrying coverage of the House of Representatives and the Senate committee hearings especially those hearings chaired by the California Democrat Rep. Adam Schiff.

“This Democratic plot to take out Trump on Election Day, take over the U.S. Senate and maintain the majority in the House takes precedence over saving the lives of American citizens. At the same time, the news media are busy passing along the lies and deceit from the Democratic Party to our citizens,” said former NYPD Police Detective Sidney Franes, now a security agency CEO in Manhattan. “On top of that, Blue State governors are unashamed about continuing to plead poverty and insisting POTUS fork over more and more taxpayer bucks,” he added. 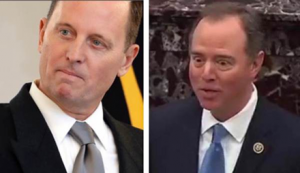 Now the mighty Chairman of the House Select Intelligence Committee, Adam Schiff, a proven liar, leaker, and fabricator of fake documents is being warned by the acting Director of National Intelligence Richard Grenell that he will order the release more than 50 declassified Russia probe transcripts if Adam Schiff continues to stonewalling and avoiding full transparency.

These specific transcripts are related to the ‘Trump-Russian Collusion’ investigation which began in the House the day after President Trump’s inauguration in January 2017.In September of 2018, the GOP-led House, with bipartisan support, voted to make public the transcripts of 53 witnesses in the bogus Russia probe.

Schiff claimed in a March 2019 letter to then-DNI Dan Coats, “Under no circumstances shall ODNI, or any other element of the Intelligence Community (IC), share any HPSCI transcripts with the White House, President Trump or any persons associated with the White House or the President.”

“Such transcripts remain the sole property of HPSCI, and were transmitted to ODNI for the limited purpose of enabling a classification review by IC elements and the Department of Justice,” Schiff added.

With that, the House Judiciary Committee Republicans and House Committee on Oversight Republicans on Tuesday turned up the heat and demanded Schiff release the secret transcripts from the Russia investigation.

“We understand now that Chairman Schiff is blocking the release of these transcripts,” GOP lawmakers wrote. “This news, if accurate, is disturbing — especially in light of Chairman Schiff’s cries in 2019 for transparency regarding allegations that the Trump campaign colluded with Russian.”

Grenell then basically told Schiff on Wednesday that he will directly release the transcripts, according to Byron York of the Washington Examiner.

“All of the transcripts, with our required redactions, can be released to the public without any concerns of disclosing classified material,” said Grenell in his Wednesday letter to “Shifty” Schiff

Several organizations, including the National Association of Chiefs of Police, the Center for Law Enforcement and Intelligence Studies, and others, believe that whether Schiff complies or not, Grenell should make certain these documents the documents released by Schiff are legitimate.

“Remember how during a hearing about the Ukrainian president and the POTUS speaking on the telephone, Schiff read a document he told the House and the American people on national television was the transcript of the famous ‘quid pro quo’ phone discussion. It turned out that Schiff wrote that phony transcript after Trump released the real transcript that showed there was no hanky-panky between Trump and Ukraine’s President Zelensky,” stated former military intelligence operative and retired police captain, George Nathaniel, Sr.

There are more than 5,000 pages of witness testimony transcripts that many believe will destroy Schiff’s credibility in pushing the Russia hoax, according to Thomas “Tommy Gun” Lakeland, an intelligence contractor who previously served as a federal law enforcement official during the Reagan Administration.