Hiring From The Swamp Will Not Engender Loyalty

In looking for people to hire, look for three qualities: integrity, intelligence and energy.  And if they don’t have the first, the other two will kill you.  —Warren Buffet

President Donald Trump rocketed to reality TV stardom for his love of two words: “You’re fired!” Some believe he brought his penchant for terminating employees to Washington, but that is not true.  He has only fired five people, all for good cause, twenty-three have resigned. Link

Former National Security Advisor and decorated military hero General Michael T. Flynn is financially broken, and still awaits sentencing for pleading to a process crime he didn’t commit. Trump’s two top establishment globalists, Pence and Priebus supported getting rid of Flynn after they alleged he misled his colleagues about conversations with the Russian ambassador.  A great loss for our nation.

Both men were chosen from outside the swamp. They have become examples of what happens to those who support Donald J. Trump.  How many from outside Washington DC would risk working for the people’s President?

Our President values loyalty, but he won’t find it in DC.  True loyalty came from outside the swamp, and most of them are gone.  The swamp creatures were chosen by those closest to the President.

Preet Bharara –  U.S. Attorney General Jeff Sessions ordered all 46 remaining United States Attorneys who were holdovers from the Obama administration, including Bharara, to submit letters of resignation.  Bharara declined to resign and was fired the next day. He is a Democrat

Sally Yates – Acting Attorney General Yates was fired for ordering the Justice Department not to defend President Trump’s Executive Order restricting travel from seven Muslim majority countries despite the DOJ’s legal council approving it. She is a Democrat.

James Comey – FBI Director Comey should have been fired the day Donald Trump was inaugurated.  Here is a list of why he was fired months later.  He is now registered as Democrat.

Rex Tillerson – Secretary of State Tillerson was fired for undermining the President regarding the Iran Deal.  He is a Republican who supported Jeb Bush for President.

Andrew McCabe – Deputy Director of the FBI was fired by Attorney General Jeff Sessions who based his decision on reports from the DOJ Inspector General and the FBI’s disciplinary office saying that McCabe had made unauthorized releases of information to the media and had “lacked candor” in talking about it.  McCabe’s wife is a registered Democrat.

The other twenty-three resigned although a few of them were actually asked for their resignations, including Attorney General Jeff Sessions.  Although I was glad to see him go, I’m not thrilled with the nominee for his replacement, William P. Barr, a close chum of Robert Mueller.  The President claimed he did not know of their friendship.  Link

National Security Advisor (NSA) H.R. McMaster’s resignation should have come sooner.  He fired every fabulous Trump supporter who worked for the National Security Council, many of whom had been hired by General Michael Flynn, especially Deputy NSA K. T. McFarland.  His new hires were all DC insiders and several who were close to Obama and Hillary.

Establishment insiders Reince Priebus and James Mattis also resigned.  The General bucked the President over transvestites in the military by freezing Trump’s order, and disagreed with him about pulling troops out of Syria even though he signed the order.  Mattis also told Trump never to use the term, “radical Islamic terrorists.” And like Mike Pence, Mattis was critical of the proposed Muslim ban.

I’m not surprised that investment banker and Trump economic advisor Gary Cohn quickly resigned after putting the finishing touches on Trump’s tax relief plan.  Cohn was cited by the press as a supporter of globalism along with Jared Kushner, Ivanka Trump and Dina Powell.  Mick Mulvaney said Cohn was the finest globalist he’d ever worked with.

Democrat Cohn eliminated normal deductions, and lowered home mortgage deductions.  The wealthy in high tax states are leaving those blue states for states without state income tax and bringing with them their leftist views. One wonders how many red states will soon be blue.  When Democrats are again in control, taxes will skyrocket, but deductions will be gone, just like the many deductions we lost under Reagan’s tax program.  Neither one of them cut government spending.

Who chooses the candidates?  During the transition phase of the Trump administration, Vice-President Pence held a large degree of influence due to his role as a mediator between Trump and moderate congressional Republicans.  He was to reassure congress about Trump’s credentials and about his own influence in determining the President’s cabinet.

After all, Mike Pence spent twelve years in congress with his friends, and voted just like they did, the opposite of Donald J. Trump’s campaign pledges.  It was Pence who made the call on Trump’s behalf to make it clear the president-elect wanted Paul Ryan to remain speaker. 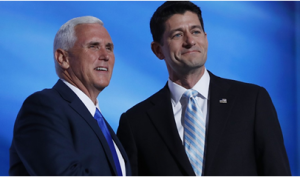 It was Pence whose fingerprints are on the selection of most of the nominees to Trump’s administration — Kansas Rep. Mike Pompeo, South Carolina Gov. Nikki Haley and Georgia Rep. Tom Price, Reince Priebus, and Rex Tillerson. Pence met with former Secretary of State and CFR member Condoleezza Rice regarding hiring Tillerson.  Seema Verma, Trump’s pick to head the Centers for Medicare & Medicaid Services, worked with Pence to design Indiana’s Medicaid expansion.  Pence quietly elevated these choices behind the scenes.

Vice-President Mike Pence has cited Dick Cheney, perhaps the most influential vice president in history, as his role model for the job.

President Trump has made it clear that his list of Supreme Court candidates came from the Heritage Foundation Link and the Federalist Society, neither of whom are considered conservatives.  Most likely Vice President Pence suggested the President rely on these two organizations.

Mike Pence has been funded throughout his political career by the billionaire Koch brothers and Dick and Betsy DeVos.  He actually cast the deciding vote for Betsy DeVos for Secretary of Education. 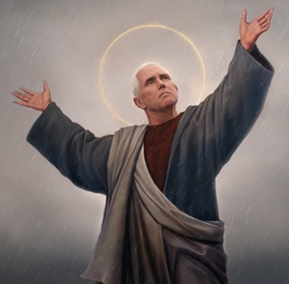 Pence is playing the role of championing our President, but his goal is to be in the White House as world leader.  His well-practiced pretense of effusive Christian faith along with his voting record concerns true people of faith that he is not what he pretends to be.

How the Senate treats a presidential nomination varies depending on what the Congressional Research Service calls “the importance of the position involved, existing political circumstances, and policy implications.”  Here is the list of nominees requiring Senate confirmation.

The nominee is referred by the Senate’s executive clerk to a specific committee or committees based on rules and precedents.  These committees investigate the nominee and hold hearings and then report to the full Senate.  Information is submitted, but Democrat and Republican senators also collect their own information.

The Senators want to explore a nominee’s character, qualifications and policy views.  Presumably anyone can submit to the committee whatever information they may have, true or false (see the Kavanaugh confirmation).  The committee has three options in voting to send a nomination to the full Senate, and that report can be favorable, unfavorable or without any recommendation at all.

Any nominee put forth by the Trump administration faces a nasty confirmation, unless of course, the nominee is an establishment insider like William Barr.

In 2011, to ease the logjam of President Obama’s appointees awaiting confirmation, the Senate adopted a resolution allowing nominations for specific positions to bypass a committee and go to the full Senate for a vote. The committee still collects background, however. And if a single senator objects to the expedited process, the nomination goes to committee as usual.

The Constitution’s Article II, Section 2, Clause 3, reads in relevant portion: “The President shall have Power to fill up all Vacancies that may happen during the Recess of the Senate…” In today’s world, with Congress being in session on a nearly year-round basis, what could truly be regarded as a “recess” has become quite unusual.  George W. Bush appointed John Bolton as UN Ambassador during a recess, Congress does not want this to recur.

In its report to Congress, the Government Accountability Office (GAO) identified 321 presidentially appointed (PA) positions governmentwide that do not require Senate confirmation.

PA positions fall into one of three categories: 67% of the positions serve on federal commissions, councils, committees, boards or foundations; 29% of the positions are within the Executive Office of the President, and the remaining 4% are in other federal agencies or departments.

So, who investigates these appointments?

Trump and/or his staff personnel are supposed to “investigate” proposed nominees (although that may be limited simply to scanning a curriculum vitae and taking the advice of an “insider”). The problem with Trump is that he does not do much of his own homework, and what little he does he seems to do without much discernment.  He is far too trusting of those who surround him.

The President needs to hire outside of the swamp, outside of DC, someone who knows how to research people he’s been advised to hire, because his appointments are establishment elitists.

Rosenstein should have been gone long ago or at least shown the door when he said he was resigning in two months. He is a close friend of both Comey and Mueller, both who wish to bring down our President. Christopher Wray is no better than James Comey, and he made that clear in his Senate confirmation hearings.  Nominee for Attorney General, William Barr, is another swamp creature who will keep the status quo. Robert Mueller should have recused himself from the special counsel position because of his many conflicts of interest.

The question remains…who suggested these nominees and who, if anyone, investigated their past performances?  As a real estate tycoon, Trump has dealt with organized crime, government officials and the political hierarchy in the City of New York.  His discernment should be finely tuned.

Donald Trump values loyalty, but the persecution of both General Flynn and Paul Manafort, the latter of whom is literally perishing, needs to come to an end.  These were loyal men who are being destroyed.

Donald Trump must cease appointing people who undermine him. There are too many foxes guarding the hen house. The enemies of freedom encompass anarchy, tyranny and communism.