Liberals can lie without fear of accountability because the people who’d hold them accountable — journalists — are on their side. —Derek Hunter

The administration of justice is the firmest pillar of government. —George Washington

The ballot box and confirmation votes in the Senate are the only way to truly destroy liberalism. I just hope we destroy it before they destroy everything. They have to be destroyed. The ballot box is key. And then the judiciary. The judiciary is where the Democrats and the left have their election insurance. When they lose, they still have the power of the judiciary in their back pocket. —Rush Limbaugh

Donald Trump’s biggest, non-personal sin was winning. And for that, the establishment left and many of the right are trying to destroy him. And they’ll destroy anyone and everything that stands in the way of doing that, even the country, if necessary. They have the infrastructure to do it, the accomplices, and the will to do it. Any compromise from the Republicans is a death sentence.

Which is why they have to be destroyed first. And our President needs to do just that!

“You don’t really care about Mr. Manafort, you really care about what information Mr. Manafort can give you to lead you to Mr. Trump and an impeachment, or whatever,” was actually said by U.S. District Judge T.S. Ellis III to Special Counsel Robert Mueller’s team as they sought more power to widen their investigation in search of a crime.

Former Trump Campaign Manager Paul Manafort has languished in an American gulag of solitary confinement for eight months.  In attorney Sidney Powell’s recent Daily Caller article, she wrote, “When a witness or defendant from whom prosecutors want ‘cooperation’ does not do as they demand, they put him in solitary confinement. And it works. It literally breaks people.”

Yes, solitary confinement is abject torture for most people.  And can break the strongest in a matter of twenty-four hours.  This is a tactic to force prisoners to spill their guts with improvised statements, and in this case against the prosecutor’s target, Donald Trump. 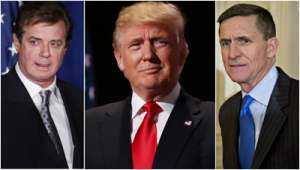 As former New York Police Commissioner Bernard Kerik wrote, “Deprivation of freedom — intensified by solitary confinement — makes you say and do and think things that you would never otherwise say or do or think.”

Lt. General Michael T. Flynn (R) U.S. Army is a highly decorated intelligence officer who gave 33 years of service to his country.  General Flynn holds three graduate degrees and an Honorary Doctorate of Laws from The Institute of World Politics, Washington, D.C.  His stellar reputation has been tarnished and his life savings decimated.

The General never lied to anyone and that includes VP Pence and former Chief of Staff Priebus.  Orders from on high were carried out by former Deputy AG, Sally Yates with complicity of the Department of Justice (DOJ) who hated the man who became the National Security Advisor for a President they wanted destroyed.

Lt. General Michael T. Flynn has always been the Deep State’s worst nightmare, and as such he had to be removed.  This is well documented in Gregg Jarrett’s book, The Russia Hoax.

Michael Flynn’s latest appearance in DC District Court on 18 December 18 was in front of Obama appointee, Judge Emmet Sullivan. The judge lost his cool in the courtroom when he attacked one of America’s most beloved veterans with false and malicious statements.  It was a flagrant breach of judicial protocol.

Frank Hawkins latest article in American Thinker, Understanding Why the Deep State Had to Take Down General Michael Flynn, should be read by every patriotic and God fearing American.

Why are these two men continually suffering when President Donald J. Trump has the Constitutional right to pardon both of his former supporters?

Article 2, Section 2, Clause 1 of the U.S. Constitution provides that the President shall have Power to grant Reprieves and Pardons for Offenses against the United States.

Senate Majority Leader McConnell and House Minority Leader McCarthy are leftists, nothing good there.  The Democratic left is Marxist pond scum algae putrefaction.  What do have left?  Only a handful of decent people and they’re stomped on…Dave Brat was voted out and he was one of the best. 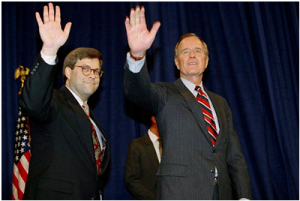 William Barr served as Attorney General for establishment globalist “New World Order” President George H. W. Bush from 1991-1993.  From all appearances, Barr is a swamp creature.  From 1973-77, he was employed by the Central Intelligence Agency.  George H. W. Bush was CIA Director from 1976-1977.

Like Trump appointee Christopher Wray, William Barr has asserted independence from the White House saying he believed that Russia had tried to interfere in the 2016 presidential election, that the special counsel investigation shadowing President Trump is not a witch hunt and that his predecessor was right to recuse himself from the probe.

The comments by William Barr at his Senate confirmation hearing pointedly departed from President Trump’s own views and underscored Barr’s efforts to reassure Democrats that he will not be a loyalist to a president who they believe has appeared to demand it from law enforcement. He also repeatedly sought to assuage concerns that he might disturb or upend special counsel Robert Mueller’s investigation as it reaches its final stages.

Barr made it plain that he believes Mueller should be able to complete his work. More notably, he said he had confidence in the special counsel when he was first appointed and added, “I still have that confidence today.”

Again, I want to know who advises President Trump regarding important positions?  Why?  Because, God help us, the nominee for Attorney General has been greeted by applause from both Democrats and Republicans, and that is bloody worrisome!

William Barr is a committed gun control advocate. He has said little about firearms or gun control during his career, but he is widely considered to be the author of PL 101-647, The Crime Control Act of 1990, which had a number of firearms provisions.  In 1991 at his first hearing for AG under Bush, Barr endorsed both the Brady Check portion of the Brady Bill and the semi-auto ban, although he did express a preference for magazine bans: “I would prefer a limitation on the clip [sic] size.”  Link

Barr and Mueller have been best friends for 20 years.  He has a “high opinion of Mueller.”  Their wives apparently attend the same Bible study, which I find downright peculiar. Lindsey Graham has reported that Robert Mueller attended the weddings of two of Barr’s three daughters. Barr’s daughter, Mary Daly, works at the Justice Department specializing in the Opioid crisis.

The former Bush AG has claimed that Mueller is not involved in a witch hunt.  Oh really?  Well then, explain to me why Texas Congressman Louie Gohmert wrote a 15,500 word article on Mueller’s sordid history of illicitly targeting innocent people.  Louisiana State Senator John Milkovich wrote Robert Mueller, Errand Boy for the New World Order exposing Mueller as a chronic collaborator, with a career characterized by cover-ups, corruption and unconscionable conduct.  Mueller is quite obviously an ever-willing instrument of the Deep State dissimulation.  And these two are best friends. 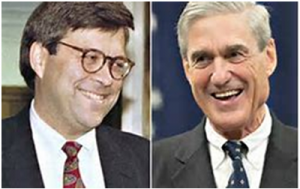 Barr actually promised never to cave to political pressure from President Trump or elsewhere, he said he’d refuse a hypothetical order from Trump to fire Mueller without cause.  Huh? William P. Barr has already made an unconstitutional deal.  His nomination should be pulled.  For a special prosecutor to be constitutional at all, the president has to be able to fire him.

How is it supposed to be reassuring to Trump supporters that our President has nominated one of Mueller’s best friends to oversee him and his investigation?  If Barr vowed not to fire Mueller, he’d be undercutting Trump from day one, just like our former AG, Jeff Sessions, who recused himself from the Russia probe.

Excuse the daylights out of me…but the entire DOJ works for our President…so…Barr should be withdrawing his nomination as a close friend of Mueller.  What if Mueller oversteps his mandate and needs to be fired, would Barr carry out those orders?  Link

For those who care about following the Constitution, for those who want Trump, or any president to be in possession of his full constitutional powers, this is a time to beware.

The Democratic Socialists, and many of the Trotskyite right, do not want Mueller terminated.  Federal regulations governing a special counsel say that counsel may be “disciplined or removed from office only by the personal action of the attorney general.”

Criminal corruption was never prosecuted by Sessions, by Rosenstein or by Whitaker and I highly doubt William P. Barr will change direction.

Rosenstein and FBI Director Wray both lied to President Trump and Congress when they said he was not under investigation.  Rosenstein has even made the statement that he would wear a wire to secretly record our President. Why hasn’t he been fired?  The minute he said he was retiring, he should have been shown the door.

Robert Mueller should have recused himself since it was the firing of his good friend James Comey, which was suggested to the President by Mueller’s cohort Rod Rosenstein, that launched the whole Russia probe. Therein lies a conflict of interest.

Or how about obstruction of justice for scrubbing the Strzok/Page texts before giving the phones to the Inspector General?

Acting AG Whitaker should have fired Mueller right then and there.

James Comey was our former FBI Director who actually leaked classified information through a friend to the New York Times.  Now he’s teaching ethical leadership at William and Mary College.  Why hasn’t he been arrested and charged?

Both Agent Strzok and Attorney Page should be charged for their apparent systemic culture of “media leaking” of information damaging to Trump. Link

FBI’s standard procedure is to destroy and suppress evidence.  A month before the 2016 election, Americans learned that the FBI agreed to destroy the laptops of top Hillary Clinton aides.

Hillary Clinton destroyed 33,000 emails, sent classified information over her home computer, destroyed iPhones, sold 20% of our uranium to Russia with the help of Robert Mueller which made 145 million for the Clinton Foundation, lied about Benghazi, and so much more, a list too long to enumerate.

Add to the list, former Attorney General Loretta Lynch and her tarmac discussion with Bill Clinton.  James Clapper’s perjury was never charged and the Statute of Limitations ran out.  John Brennan’s lying and spying on the Senate.  Bruce and Nellie Ohr’s conspiracy against Trump, Lois Lerner’s targeting of rightwing groups, and on and on and on…with no consequences against any of these corrupt filthy political malefactors.

Lies, corruption and traitorous activities are common place.  True justice seems to evade the most evil in the politics of our society.   Dietrich Bonhoeffer said, “We are not to simply bandage the wounds of victims beneath the wheels of injustice, we are to drive a spoke into the wheel itself.”

P.S. While paying those Christmas shopping bills, please don’t forget NewsWithViews who brings solid research into your mailbox every day.  When writing out those checks, please remember, the investigative journalists who write for this website receive no compensation.  We do it for the love of country and to inform fellow Americans.  Please remember NWVs with your monthly checks, and tell your friends to sign up on the website to receive daily articles.  Please Click Here To Donate!