Home/May 2020, Opinions/How Do You Stop A Government That’s Gone Rogue?

How Do You Stop A Government That’s Gone Rogue?

“This country, with its institutions, belongs to the people who inhabit it.  Whenever they shall grow weary of the existing government, they can exercise their constitutional right of amending it, or exercise their revolutionary right to overthrow it.” —Abraham Lincoln

How else can we account for senior FBI agents throwing the rulebook away and using their powerful agency to destroy a war hero (General Michael Flynn) to get to the President of the United States (Donald Trump) for political gain, in a silent, unseen battle of one party against another?  The action was illegal and the cover-up of the illegality was even worse.  Will anyone be punished?  If not, then what happens to the rule of law?

Why is it that governors and mayors suddenly have the power to suspend your constitutional rights over a virus, an illegal suspension that 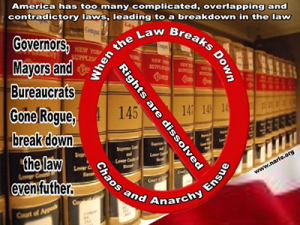 is now being challenged by the people in large scale protests for that very reason?  Court cases against government’s abuse of power are popping up in several states.

What if the governors and mayors have just gone rogue and are exercising power they don’t have?  What do the people do then?  But conversely, if the people won’t obey the law, the law breaks down.  If the law breaks down, there is no law and life becomes a free-for-all where those with the power rule over those with no power in a dictatorial fashion.

What can explain the massive build up in local, state and federal law to the point that the law has become meaningless, contradictory, complicated and in many cases, unenforceable?

How do we confront the socialist, environmental and one-world government takeover of our public schools and colleges by that same collectivist ideology?

Why have we let our borders become so porous as to render national sovereignty, economic security, national security and cultural heritage a joke?  What do the people do if government, by its action or inaction, let the problems get worse and worse by the day, the month, the year, the decade and the century until they can no longer be fixed?

It is unconscionable, if not outright unconstitutional that we allowed the Democratic Party to nationalize America’s health care system under Obama Care and make it more complicated and expensive.  Their publicly stated goal is single-payer health care and if the Democrats take power again, the radical left’s dream of Medicare-for-All will be realized, no matter the cost, or the destruction of the best health care system on the planet.  Americans aren’t leaving America for better health care in another country because most other countries have gone to mediocre, low quality, socialized medicine.

Let’s face it.  The American government has gone rogue and has broken with the foundation of liberty, as codified into law by the U. S. Constitution.  The U. S. Constitution has become just a convenience for politicians, statesmen and bureaucrats to throw around when it fits their agenda, as we saw in the mock Congressional impeachment hearings to impeach President Trump.

“How do we stop a government that has gone rogue?”

The Declaration of Independence gives us a clue:  “That whenever any Form of Government becomes destructive of these ends, [gone rogue] it is the Right of the People to alter or to abolish it, and to institute new Government, laying its foundation on such principles and organizing its powers in such form, as to them shall seem most likely to effect their Safety and Happiness.”

President Lincoln gave us another clue:  “This country, with its institutions, belongs to the people who inhabit it.  Whenever they shall grow weary of the existing government, they can exercise their constitutional right of amending it, or exercise their revolutionary right to overthrow it.”

Except for one thing!  The U. S. Government has made abolishing the current government a crime in the Alien Registration Act (Title 18, USC, Section 2385):  “Whoever knowingly or willfully advocates, abets, advises, or teaches the duty, necessity, desirability, or propriety of overthrowing or destroying the government of the United States or the government of any State, Territory, District or Possession thereof, or the government of any political subdivision therein, by force or violence, or by the assassination of any officer of any such government; or”

“Whoever, with intent to cause the overthrow or destruction of any such government, prints, publishes, edits, issues, circulates, sells, distributes, or publicly displays any written or printed matter advocating, advising, or teaching the duty, necessity, desirability, or propriety of overthrowing or destroying any government in the United States by force or violence, or attempts to do so; or”

“Shall be fined under this title or imprisoned not more than twenty years, or both, and shall be ineligible for employment by the United States or any department or agency thereof, for the five years next following his conviction.”

It is quite possible that we are breaking this law by even bringing up the subject.

Now it is still possible for the people to “exercise their constitutional right of peaceably amending the government by their vote and other legal means.”  But then haven’t we tried that for the last 100 plus years and we still get the same corrupt people in government (politicians and bureaucrats alike) that have gone and are still going rogue, the reactions by government, local, state and federal, to the Coronavirus as a glaring example?

Years ago, back in the 18th and 19th centuries, when politicians got out of line, they were tarred and feathered.  During the Whiskey Rebellion in 1790’s Pennsylvania, farmers rebelled against the federal government’s taxation on whiskey distillers by tarring and feathering the government whiskey tax collectors.

During the wild-west years, local and state governments charged, tried, convicted and summarily hanged people and politicians or other citizens that broke the law, or murdered and robbed people, or stole horses and cattle.

Today, we are letting violent prisoners out of the jails by the thousands because of the virus but arresting people that are allegedly violating quarantine orders and then throwing them in jail.  How ludicrous is that?  It is just another example of government gone rogue.

We can’t take these drastic actions like we did in years gone by because after all, we are civilized people.  That’s right, civilized people that have allowed a rogue government to repeal their constitutional rights.

Militia groups say they are organized for educational purposes to inform the American people of their rights under the Constitution.  If they are educational groups, why do they train with guns?  The answer is obvious.  They are preparing for a time when it becomes necessary to “….. alter or to abolish it, (government) and to institute new Government, laying its foundation on such principles and organizing its powers in such form, as to them shall seem most likely to effect their Safety and Happiness.”

Ladies and gentlemen, we are not advocating, aiding, or abetting anything.  We are just asking the questions.

Nevertheless, we add this warning!  The American government has gone rogue on so many levels!  The rule of law has become one law for the privileged and ruling class and another law for the peasants.  Socialism, radical environmentalism, collectivism and one-world government have all but replaced individual freedom and national sovereignty.

If a large percentage of the American people don’t jump on the USS Rebellion ship in open defiance of government and find ways to restore our Constitution and unalienable rights, they will find themselves in a China-like existence where every aspect of their lives will be controlled.  In many cases Americans are already in a China-like existence with constant surveillance of what Americans do, what they eat, what they drink, where they go, who they see, where they work, where they live, what they drive, how much they earn, how much they spend and what they buy.  (See: “How Close Are We To Living Like the Chinese?”

But then the people have allowed it to happen in exchange for security and a few pieces of silver.  Like brain-dead idiots, they have been bought off by government and don’t seem to be the wiser.  So who’s to blame ladies and gentlemen for government going rogue?  Who’s to blame?

Tens of thousands of people are buying guns in large quantities all over America.  Why?  They are also buying our Constitutional, powerful, legally intimidating “No Trespassing signs” in huge numbers.   Why?  Because the people are scared to death of government going rogue (not the virus) and they are afraid they won’t be able to defend themselves.  They have good reason to be afraid!