How Trump Should Solve The Fake News Problem

The ongoing character assassination of President Trump in the American “fake news” media is a political massacre the likes of which we have never witnessed before in history. There is a coordinated media effort to crucify Trump on the basis of “fake accusations” based on “non-existent evidence” and spread through a network of anti-American propaganda outlets called “news rooms.”

Every day our headlines are full of “fake news” stories attacking Trump. The Harvard Kennedy School just issued a comprehensive report on overall media coverage of Trump. That report demonstrates just how “fake” and anti-Trump today’s news coverage really is…

NOTICE: Before you discount this report just because it was issued by known left-wing Harvard, realize that the mere fact that even Harvard arrived at these findings means the findings are inescapable. If I were quoting Fox News in this piece, people would easily claim “Fox News is in the bag for Trump.” No such claim can be made against Harvard.

News time spent on President Trump, his administration and the FBI – 77% 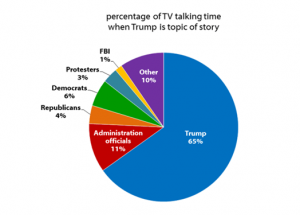 Percentage of “negative” coverage of Trump 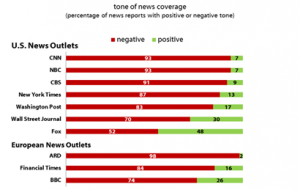 The most anti-Trump “fake news” outlets in America 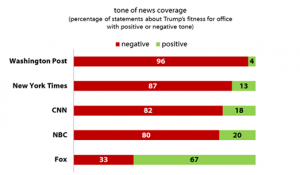 In recent days, the White House has even mentioned that they may stop White House briefings altogether due to the total lack of any journalistic standard governing the unprofessional behavior of reporters assigned to the White House.

It would be a mistake for the White House to stop all briefings just because of the unprofessional behavior of current White House reporters. It would only fuel their narrative that “Trump has something to hide.”

However, there is no reason for the White House to continue extending press credentials to individuals who consistently turn every briefing into a “fake news” circus. Trump does not need to ban certain papers (Washington Post, New York Times) or networks (CNN, MSNBC, ABC, NBC, CBS, NPR, PBS) to solve the problem.

Don’t stop the briefings and don’t ban any “news” (propaganda) outlet from the briefings. Instead, the White House should simply make a statement concerning the protocol for White House briefings including a Code of Journalistic Conduct that everyone must abide by to keep their press credentials.

Notify their employer that they will need to clear a new reporter for the White House and will not have representation in the briefings unless and until they send a real journalist able to follow journalistic standards and White House protocol.

In a previous column, I expose the whole truth behind the WaPo propaganda machine owned by Amazon.com billionaire Jeff Bezos. Left-wing globalists control 100% of the U.S. media and that’s why they are engaged in a coordinated assault on Trump, who threatens their efforts meld America into the global commune with his “make America great again” agenda.

But Trump won’t have to remove too many before they all get the message loud and clear. If you agree, forward, text, post and tweet this column to @POTUS right away!