Home/Opinions, September 2020/In The Human Species, All Roads Lead To Insanity

In The Human Species, All Roads Lead To Insanity

“The personal ego already has a strong element of dysfunction, but the collective ego is, frequently, even more dysfunctional, to the point of absolute insanity.” —Eckhart Tolle, contemporary spiritual teacher and best-selling author

There are millions upon millions of good, sane people on this earth.  But history has shown us that human goodness can be crushed in an instant by the insane power of the state.

On January 1, 1958 Chinese Communist Party Chairman Mao Zedong announced his new “Great Leap Forward” for the people of China.  The net result of Chairman Mao’s plans for improving the economy of China resulted in the deaths of between 20 to 46 million Chinese, mostly from starvation due to a massive, government-created famine.  Mao accomplished this feat by confiscating all the agricultural crops from the nation’s farmers, leaving nothing for the farmers to eat.  The people couldn’t resist, even if they wanted to, because Mao owned all the guns and controlled the military.

The current Chinese Communist Party under its leader Xi Jinping, is forcing millions of Chinese Uighur Muslims in western China into 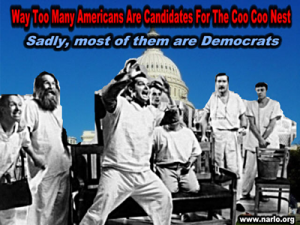 labor camps, requiring them to listen to lectures and sing hymns praising the Chinese Communist Party.  Nothing has changed in 13 Chinese dynasties since 2070 BC when the first Chinese dynasty was inaugurated.  Chinese oppression of its people is alive and well and has been for 4,000 years.  There have been many uprising in China but none of them stuck for long.

In 1932 – 1933, Joseph Stalin did roughly the same thing to the people of Ukraine.  Stalin imposed what was called collectivization, which replaced individually owned and operated farms with large state-run collectives.  The farmers resisted and in retaliation Stalin confiscated their crops and deported over 50,000 Ukraine’s to the Siberian gulags.  Most Ukraine-produced farm products ended up in the big cities of the Soviet Union, leaving around 7,000,000 Ukraine’s to starve.  One observer wrote that “you could see the people walking about, and one would drop, and then another, and then another.”  Many Ukraine’s were so emaciated that their bodies began to swell and stink.  Hospital staff were seen carrying bodies out of hospitals, to be thrown into giant pits.

Dictator Nicolae Ceausescu, communist leader of Romania, (1965 to 1969) did the same thing to his farmers when he assumed power.  Nicolae and his peasant wife were so cruel to the people of Romania, he was summarily executed by his own military guards.  Once again, the people couldn’t resist, even if they wanted to, because Ceausescu owned all the guns and controlled the military.

Everyone knows of the infamous Adolph Hitler that killed at least 6 million Jews in an attempt to exterminate an entire race.  It has been estimated that Hitler caused, at a minimum, 50,000,000 deaths during his reign as Chancellor of Germany and the Second World War.  The people couldn’t resist, even if they wanted to, because Hitler owned all the guns, controlled the military and disarmed the citizens.

All over the planet, little dictators are persecuting and terrorizing the inhabitants.  In many cases, dictators gain huge riches by exploiting the country’s natural resources, or implementing slave labor.  Or, they are being supported by massive foreign aid from western countries.  Corruption, cruelty and barbarism are the rules of the day.  The people are helpless to resist out of fear of being starved, imprisoned, tortured, or killed by the dictator’s army.

But it isn’t just dictators that rule the people of the earth.  Many nations are ruled by politburos.  Politburos are policy-making committees of communist or socialist run countries.  Nevertheless, the people of such nations are but pawns and slaves of the communist party elites and their plight is the same as a country run by a dictator.

Sadly ladies and gentlemen, insanity, cruelty and enslavement reign on planet earth.  Peace and tranquility are the exception, not the rule, except maybe in America where the last vestiges of freedom are slowly dying before our very eyes as we succumb to a radical ideology and insane policies.

Most of the African and South and Central American countries are run by dictators, or ruled by some version of a politburo.  Europe, Canada, Australia and New Zealand have descended into socialism and stagnating economies.  China is a wholly communist nation with the goal of being the dominant economic and military power in the world.  Russia is essentially a dictatorship under the thumb of Vladimir Putin.  The Middle East is locked in a power struggle between two opposing versions of Islam, excluding the state of Israel.  The only continent allegedly free of politics, death, destruction and insanity is Antarctica where only the scientists and the Penguins rule.

All of this is punctuated by several nations possessing nuclear weapons of mass destruction.  An unintended twitch here, or a twitch there and the peoples of the planet could be condemned to mass extinction and nuclear winter.  Now that is insane.

Adding to the planet-wide insanity is the criminal activity of drug trafficking, human smuggling, illegal border crossings and white slavery.   The human misery and suffering that afflicts innocent people from this activity, knows no bounds.  Of course, this is all insane.

There is only one free nation, America that stands in the way of perpetual wars, perpetual enslavement and starvation, perpetual crime and perpetual misery, on all continents save one.  That is if Americans can prevent being sucked into the swirling vortex of utopian socialism and world government that socialist Democrats seem want to pull us.

America has become hopelessly divided by two opposing ideologies that are like oil and water to each other. Neither ideology can exist with the other in peace, much like the Islamic Sunni and Shia Moslems of the Middle East that are in constant conflict.

One of the American ideologies believes in individual freedom, God-given natural rights and Constitutional representative government.  The other ideology believes in a strong central government and total dependency on government by the people, led by an Absolute Democrat Monarchy.  The former leads to freedom.  The latter leads to total enslavement and is truly insane.

The socialist Democrats of America have decided to crush the conservative ideology with violence, intimidation, censorship and application of the “cancel culture.”  Their efforts are greatly enhanced by public school indoctrination centers, a wholly liberal academia and corporate and union assistance. Added to that is socialist Democrats being aided and abetted by the news and social media.  It is a winning strategy, except for one fly in the ointment.

The conservative ideology is not going quietly into the night without a whimper and in contrast to the people under dictatorships and politburos, Americans own guns, millions upon millions of them.  Many of those people are trained military and have already been through several tours of war.  They would rather live in peace but if war comes to them they won’t shrink from it.

One ex-military marine put it this way:  (We cleaned it up a little)

“All you young and naive kids on both sides of this equation who think that having a Civil War will advance your agenda or restore your vision of what you think is America, just remember this … Those of us older generations aren’t [putting up with your crap.] And if you jump off, you better be prepared to deal with us.  We don’t care what color clothes you’re wearing, or what sign you’re holding, or the color of your skin.  If you come after us, our friends, our family, our co-workers, our neighbors, etc., we will kill you.”

As an example, when ANTIFA came to the little town of Coeur d’alene, Idaho, the men and women of Coeur d’alene came out in full force with guns at the ready.  They found the ANTIFA cars and showed them out of town.  ANTIFA is not likely to return to the streets of Coeur d’alene any time soon. (See: “The Only Way To Confront Violence Is With Violence.”)

We don’t know the outcome of the battle between the conservative and socialist democrat ideologies yet.  The story is ongoing and perpetual.  Certain forces are always at play to crush freedom.  The preservation of freedom seems to always come from armed conflict and revolution.  The reason is, “In the Human Species, All Roads Lead To Insanity.”

No matter how we slice it, whomever wins in November, the conflict between the two ideologies will rage on until one vanquishes the other in a battle between insanity and reason.  There is no way the two ideologies can live in peace.  Either socialism or freedom will win out.

Whether Trump or Biden wins, violence will continue to grow across the land as each ideology jockeys for the heart of the people by violent or peaceful means.   Putting down the rioting and violence with law enforcement or a military army will only serve to harden the resolve of the rioters, looters and arsonists.  It will not change their minds or cause them to become more peaceful.  It might send them underground for a while but eventually they will re-surface again and again.   You see they have become insane over a Democrat-created falsehood, systemic racism.

Each American has the opportunity to choose between government-run control of everything, confiscation of our guns, nationalization of health care, open borders, repeal of the Electoral College, de-funding the police, rising violence and crime, rising taxes, increased regulation, the war against alleged climate change on steroids, the unconscionable reduction of our fossil fuel energy supply, rolling black outs, global government, or God knows what else. OR, they can choose the preservation, protection and defending individual freedom and unalienable rights under a Constitutional Republic, national sovereignty and a strong, vibrant economy under capitalism and free markets.  If Americans choose the former, they are hopelessly insane.   If they choose the latter, the rights of the individual, freedom, growing opportunities and financial security could be preserved.

Unfortunately, the only logical conclusion one can come to is that the growing conflict between the two ideologies has no other path than open warfare, unless, in the end, cooler heads prevail.  We’re not holding our collective breath in anticipation of such an outcome because “In the Human Species, All Roads Lead To Insanity.”  Too many Americans don’t deserve freedom and should be remanded to the dark confines of the insane asylum, colloquially referred to as the coo coo nest.

This author is not religious but it may very well be that the Judeo-Christian religions have prevented the human species from going altogether stark raving mad, at least here in America.