Is The Democrat Bombing Hoax A Smear Campaign?

You don’t hand matches to an arsonist, and you don’t give power to an angry left-wing mob.  Democrats have become too extreme and too dangerous to govern.  Republicans believe in the rule of law – not the rule of the mob.  VOTE REPUBLICAN.  President Donald J. Trump

Congresswoman Nancy Pelosi spelled it out for us in a 32 second video where she explained “political wrap up smear campaigns” against Republicans.  “You smear somebody with falsehoods and all the rest, and then you merchandise it.  Then the press writes it, and it becomes validated.”

The Secret Service has intercepted “potential explosive devices” targeting the Clintons and Obamas, while investigators also looked into a suspicious package at CNN’s New York offices. Days earlier, authorities found an explosive device in the mailbox of George Soros. We don’t know who sent them, or why or even if they were dangerous.

Call me a skeptic, but my first thought was that this was a false flag of unhinged leftists who know they’re losing and are trying to affect the outcome of the mid-term elections.  I’m not the only one who immediately thought this.  Several emails from friends said the same thing, as did a caller into Rush Limbaugh’s show yesterday.

Investigators might want to take a good look at far-left groups like Antifa as the real target is most likely the political power of the Republicans. 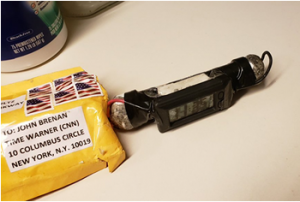 “The packages were immediately identified during routine mail screening procedures as potential explosive devices and were appropriately handled as such,” Assistant Special Agent Mason Brayman said in a statement. “The protectees did not receive the packages nor were they at risk of receiving them.”   Some of the 10 suspected mail bombs addressed to high-profile Democrats and others over the last few days were flawed and not capable of exploding, while others have yet to be fully analyzed, several investigators said Thursday.

And tests have determined that a powder found inside an envelope delivered to CNN along with a pipe bomb was harmless, a law enforcement official told CBS News.

Since all of these so-called explosive devices were sent to Democrats, it’s of interest that they are apparently innocuous.   Not a single person has been injured because none of devices exploded, which tells me the devices most likely were never intended to explode.  All defective or all a false flag?  Is it a dry run, a hoax, or a distraction for something else?

Really, does anyone think the Republicans are that stupid?  This so obviously appears to have been done by the Democrats to garner sympathy votes.  Oh, they may find some dummkopf right-winger to take the blame for this, but anyone with a brain can see right through this pre-midterm attempt to influence the elections.

Of course, Democrats and other critics of President Donald Trump are blaming Republican leaders for either explicitly or indirectly condoning violence against Democrats and the media following multiple bomb scares this week.  What a joke.

Peter Daou, a former top adviser to Hillary Clinton, declared on Twitter, “THE FAR RIGHT IS VIOLENT.”  He also claims that the right is responsible for most acts of violence or terrorism.  He should ask Republicans in the Trump administration who have been attacked in restaurants by hordes of “resisters.” Better yet, ask Congressman Steve Scalise what he thinks about that statement.  And maybe he’d better look at Islam and their terrorist activities.

I’ve explained psychological projection many times in the past.  It is a theory in psychology in which the human ego defends itself against unconscious impulses or qualities by denying their existence in themselves while attributing them to others. For example, a person who is habitually rude may constantly accuse other people of being rude.  The leftists know exactly what they’ve advocated against the Republicans and they’re using this ridiculous bomb attempt to influence their voters and charging Republicans with exactly what they are guilty of continually promoting.

In my previous article, Antifa’s Red Army is Orchestrating a Communist Revolution, I explained the groups of people behind terrorist activities against Republicans and Trump supporters.  If you think our FBI is going to find out who really did this, think again.  They are part and parcel of the Deep State and have no desire to expose the machinations of the left.

Either this so-called bomber was stupid and most real bombers aren’t, or this was a Democrat staged hoax and smear campaign, which is what I and many others believe.