Going into 30 years of doing what I do little shocks me anymore. However last week driving around doing errands listening to Rush Limbaugh, I almost choked listening to him. And, pray tell, what had me in this rattled condition?

It seems White House Counsel, Pat Cipollone, has been negotiating with Comrade Kamala Harris, senatorette from the destroyed State of California for judicial appointments to the most overturned circuit court in the county – the Ninth Circuit. Negotiating with the enemy?

“Have you heard about the lead editorial in the Wall Street Journal today? Well, let me tell you about this. The new White House counsel apparently has been consulting with Dianne Feinstein and Kamala Harris, negotiating with them on Trump judicial nominees for the Ninth Circuit Court of Appeals! It is pretty safe to say Trump may not know this is going on!

“He’s a got a new White House counsel, and this White House counsel has been working with Kamala Harris and Feinstein, two senators from California, to the choose nominees that Trump would choose to be on the Ninth Circuit that meet their approval! What the hell! We run the Senate. We have 53 senators! The reason Trump ran — in addition to not doing amnesty and shutting down the border, building a wall and all that — was the courts! What in the name of Sam Hill is going on when somebody has to…?

“Feinstein is the one that when Amy Coney Barrett was up for nomination… She is on the shortlist for the next Supreme Court opening whenever that is and wherever it is. She was engaged in confirmation hearings for her current slot on the court that she currently sits on, and Dianne Feinstein’s looking at her and says (paraphrased), “The dogma is thick with you,” meaning, “You’re really a big Catholic.” Feinstein’s not Catholic. “The dogma is thick with you.” So we’ve got a little bit of an indication of how Feinstein is gonna approach Amy Coney Barrett if she’s nominated for the Supreme Court.

“Well, why in the name of Sam Hill is somebody in the Trump administration negotiating with the people that lost in the Senate elections? Now, occasionally this happens. It does happen, but it’s a throwback to years gone by when there was at least the pretense of bipartisanship, cooperation, comity, and all that. But not during these hyperpartisan days where there’s no overlap of anything in common. You start negotiating with Feinstein and Kamala Harris and then senators from New York are gonna be the next ones that call you and demand to negotiate.

“And then if you don’t negotiate with senators from New York, then senators from some other liberal state will be calling the White House, “Why won’t you negotiate with us? Why would you…?” They don’t get a say in this! That’s the whole point of winning the presidency! They don’t get a say in who judicial nominees are, and this is the Ninth Circuit! We’re trying to go deliberalize the Ninth Circuit as much as we can, and we’re giving Feinstein and Kamal Harris a say? Why are we doing this? What is the point?”

Make NO mistake about it: Harris is a practiced, habitual liar and hard-core Marxist. Some are calling her a socialist but I believe she’s gotten over that hurdle. Let’s call a communist a communist and quit tap dancing around the floor.

Harris, who thinks very highly of herself, has announced her run for U.S. President. Why in Hell would Trump allow a member of the Democratic/Communist Party USA who despises him and is running against him in 2020 negotiate on HIS judicial nominees?

Let me take you back in time so you will fully understand why I call Di-Fi a criminal. This information and more was taken to the FBI in Southern California. The folks who brought the charges were told she was ‘too powerful’ to touch. This I know for a fact. Feinstein, like Hildebeast, should have been sent to federal prison decades ago. Instead, both of them have done nothing but enrich themselves as “public servants”.

While Karen’s piece is long, it’s necessary to fully understand the corruption and whose pockets the money went into. If you don’t have time today, book mark but please read it. I went to Chocolate Mountain and the surrounding area and did my own story on it complete with pictures.

One has to remember Feinstein was former chair of the Senate Select Committee on Intelligence:

Communist China is NOT our friend, they are our mortal enemy. They mean to rule the world and if you think that’s hyperbole you are dead wrong. Keep buying Made in China and feeding our enemy.

These crooks come into the U.S. Congress and become millionaires or increase their single-digit net worth into double digit millions through what can only be called insider trading. Insider Trading Rules That Don’t Apply To Congress: “Golden Rule: He who makes the rules pockets the gold.”

Feinstein has been in the senate 27 years. Let’s not forget the other notable criminal heavily endorsed by Ann Coulter, 76-year old Mitch McConnell whose been in the Senate since 1984:

Peter Schweizer: McConnell and Chao Must Address Their Financial Ties with ‘Rival Power’ China, May 9, 2018

There were several critical reasons I voted for Trump. Hildebeast Clinton must not get in the White House. Build the wall. Get something close to a conservative on federal benches, the U.S. Supreme Court and trade treaties.

As Limbaugh said: Why in the Hell would you even allow Harris and Feinstein to have ANY say for judicial nominations?

“We are deeply disappointed that the White House has chosen to re-nominate Daniel Collins and Kenneth Lee to the 9th Circuit,” Feinstein and Harris said in a joint statement late Wednesday. “We made clear our opposition to these individuals and told the White House we wanted to work together to come to consensus on a new package of nominees.”

Tough butts. So I ask again: Is the WH Counsel, Pat Cipollone, incompetent or just plain stupid? Did President Trump get wind of this and order his two judges re-nominated? I don’t know but what I do know is the Republicans in the corrupt US Congress have to stop getting in bed with the Democratic/Communist Party USA, play hard ball and go for the jugular. 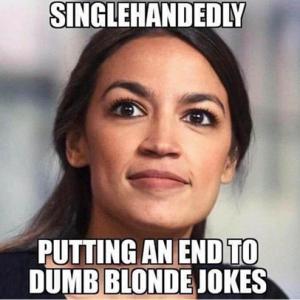 I just can’t resist because this says it all about Socialist Alexandria Ocasio-Cortez whose never met a mirror she didn’t love. The 29-year old mush-head snowflake is now a beauty expert! I guess she does this when not undertaking her official congressional duties. Okay, laugh.  Alexandria Ocasio-Cortez Reveals Her Multistep Skin-Care Routine on Instagram

Stars of the Democratic/Communist Party USA:

Harris: I’m an Ocasio-Cortez Socialist; Cultural Marxism Foes Will Be Dealt With

Cultural Marxism In Congress Must Be Destroyed 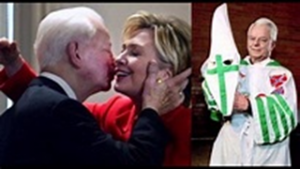 Hillary Strongman Clinton’s ‘dear friend’, late Senator Robert Byrd was a Grand Cyclops of the KKK – oh, but they were so lovey-dovey and now she’s demanding Northam resign!

Byrd wrote to Bilbo that he would never fight under the American flag:

“[W]ith a Negro by my side. Rather I should die a thousand times, and see Old Glory trampled in the dirt never to rise again, than to see this beloved land of ours become degraded by race mongrels, a throwback to the blackest specimen from the wilds.” 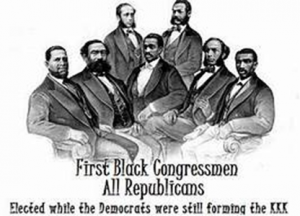 Other notable Democrats who belonged to the KKK: Hugo Black, Bibb Graves who was a Governor of Alabama, Clifford Walker was a Governor of Georgia. George Gordon, U.S. House of Representatives, John Tyler Morgan, a Grand Dragon of the KKK in Alabama was a U.S. Senator from that state. Likewise, for Edmund Pettus, also a Grand Dragon of the KKK and Senator from Alabama. William L. Saunders was founder of the KKK’s North Carolina Chapter and was NC’s Secretary of State. John Clinton Porter was a mayor of Los Angeles and member of the KKK as was Benjamin F. Stapleton who was a mayor of Denver.

That’s a very short list but you get the idea. Everyone is hopping up and down to boot Virginia’s governor for being a racist who belongs to the party that defined racism against black Americans. Oh, the irony.

You’ll just love this one from another useful fool: Mary Poppins is branded racist by US academic over famous rooftop scene because when she gets covered in soot she ‘gamely powders her nose and cheeks and gets even blacker’

A professor “teaching” literature. How about Dick Van Dyke in that wonderful family film is a chimney sweep and what do they get covered in? Soot. While dancing and singing Mary Poppins rubs the soot around on her face in a happy-go-lucky way that is now racist?

There are many but not one single Democrat.

[Note: For a thorough, comprehensive education on the Fed, the income tax, education, Medicare, SS, the critical, fraudulent ratification of the Seventeenth Amendment and more, be sure to order my book, Taking Politics Out of Solutions. 400 pages of facts and solutions.]