Over the years, one of my friends married a beautiful woman and fathered two boys.  He shared his pride with me as they grew to become men.  I watched their pictures fill the entire front of his refrigerator.  His boys adorned the walls of the living room and his office.

(Sandi and Frosty at Lake Moraine and the Seven Sisters, Alberta, Canada)

Both boys graduated from outstanding universities.  Each earned lucrative jobs in the business world.  Both boys married wonderful college sweethearts who brought children into the world.  They live in wonderful homes in successful neighborhoods. 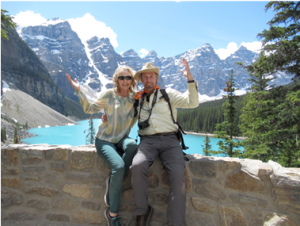 But last week, my friend informed me that one of his boys continually cheats on his wife over the past five years to a point that his wife set in motion divorce proceedings.  My friend felt deep embarrassment that his son betrayed the mother of his grandchildren.  My friend felt responsibility for his son’s lack of moral integrity.

From a successful life, the cheating husband betrayed his wife, his kids and his friends.  Not only did he create a horrible breach in his own life, but also he created incredible consequences with the married women with whom he initiated sexual affairs.  In the end, he betrayed himself.  He faces child support, broken family, weekend visits with his kids and a total breakdown in the cohesiveness of his children.

“Every violation of truth is not only a sort of suicide in the liar, but is a stab at the health of human society.”  Ralph Waldo Emerson

He never thought about that!  I’m reminded about the same events with the legendary singer Elvis Presley.  Before he married Pricilla, Elvis Presley enjoyed a wild and free-flowing bachelor life.  Once he entered the sacred rights of marriage—-society and every woman expects their man to be faithful for life.  To break such a vow, any marriage partner faces ominous consequences.

While everything looked fine on the outside, Elvis Presley lost his bearings.  He lost the daily enjoyment of watching Lisa Marie Presley grow up at Graceland mansion.  He lost his emotional and spiritual connection to his spouse.  He became a weekend father, which fractured his connection with his only offspring.

Shortly after his divorce, Presley gorged himself on fattening foods and endless drugs.  He lost his moral compass.  The negative emotional vibrations he set in motion tore at the moorings of his heart.  He became erratic, obese and forgot words to songs at his concerts.  By the age of 43, he died of a heart attack.  Many said he died of a broken heart.

In American society, some estimates show that half of American men cheat on their wives.  Today, 50 percent of marriages end in divorce courts.  Millions of kids see their mother and father living separate lives.  They lose the structure of their family because their father or mother failed to adhere to the sacred bonds of matrimony.

I wrote a teen novel about the early loss of a parent through death or divorce in my book:  Strike Three! Take Your Base.  The novel shows two paths for the teens facing the loss of a parent.  It’s gut wrenching! Yet, it’s positive.

Where does that leave any of us?  How can we maintain integrity with our spouse and ourselves?  How can we avoid what happened to Elvis Presley or my friend’s son in the not too distant future?

In the final analysis, live a life of integrity.  Life will respond with integrity.