It’s The Islamic State In Iraq And Syria (ISIS) Stupid

Despite three previous New York terrorist attacks, despite 9/11, it didn’t take long for CNN to blame this latest attack on President Trump.  They reason that because he said the capital of Israel is Jerusalem and that’s where the American embassy belongs, that this has inflamed Islamists to these reactions.  And this never would have happened if President Trump’s chain migration policy had been in place.

The bomber, a Bangladeshi immigrant living in Brooklyn, has been identified as 27-year-old Akayed Ullah.  He strapped a pipe bomb to himself and set it off in a New York City subway. Police are saying it was “absolutely an attempted terrorist act.”  The New York Police Department said Ullah has been living here for seven years and this was definitely a terrorist attack inspired by ISIS. 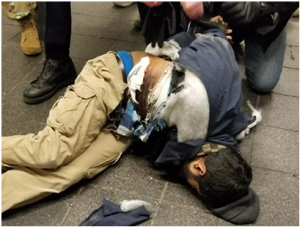 He was walking in one of the tunnels underneath New York City’s Port Authority when the bomb apparently malfunctioned and went off.  Fortunately, the explosion was small, and the bomber was injured, but police captured him alive at the scene.  He had wires attached to him and a five-inch metal pipe bomb and battery pack strapped to his midsection as he walked through the Manhattan transit hub.

Investigators briefly spoke to the alleged bomber, who told them he made the explosive device at the electrical company where he works.

Three other people were slightly injured when the bomb went off.  They were taken to local hospitals, treated, and released.  One person was seriously injured and is in Bellevue Hospital.

The morning traffic jams in one of the busiest places in our country, was unbelievable.  All MTA trains were bypassing Port Authority-42nd Street as police investigated the incident.  All New Jersey Transit buses were not stopping at Port Authority. The New York Waterway was also running extra ferries.

Of course, Google has chosen to censor that ISIS was involved in this terrorist attack.

And, the FBI’s Joint Terrorism Task Force also is investigating the incident.

Well happy days, the FBI is in on the investigation, and we know that in February of 2012, former FBI Director Robert Mueller helped to purge hundreds of counterterrorism training documents after a months-long review found inaccuracies and other problems in their description of Muslims.

The review was triggered after a September blog in Wired magazine revealed training documents that reportedly called the Prophet Muhammad a “cult leader,” claimed “devout” Muslims have been generally violent for hundreds of years and made other controversial statements.  President Obama wouldn’t want the truth taught to FBI agents, and of course, Director Mueller followed these obscene orders.

And don’t forget what Homeland Security Officer Philip Haney told us in his book, See Something, Say Nothing.  He did all within his power to protect America from the internal and external threats from jihad.  He thoroughly documented the government’s lack of willingness to protect the nation from a deliberate, explicit and strategic attack from within our borders.  The Department of Homeland Security under President Obama required Haney to scrub records of Muslims with terrorist ties.

“The primary Islamic advisors regarding the Islamic threat who are inside the White House, State Department, CIA, FBI, DHS, national security staffs, and others are Muslim Brotherhood (MB) operatives or Muslims ideologically aligned with the Muslim Brotherhood.” John clarified that the average FBI agent hasn’t any training in how to question Islamic suspects using sharia which Muslims would understand.  The hired Islamists within the DOJ are ones who do the translating, and complaining.

In 1998, Guandolo was with the FBI investigating the Nairobi bombing of the US Embassy.  He also worked 9/11 and related al Qaeda cases out of the bureau’s Washington field office.  And, after 9/11, John began an assignment to the Counterterrorism Division of the FBI’s Washington Field Office developing an expertise in the Muslim Brotherhood, Islamic Doctrine, the global Islamic Movement, and terrorist organizations including Hamas, Al Qaeda, and others.

John was designated a “Subject Matter Expert” in 2006 by FBI Headquarters and created and implemented the FBI’s first Counterterrorism Training Program focused on the Muslim Brotherhood, Islamic Doctrine, and the global Islamic Movement.  He knows the workings of the Department of Justice, especially the FBI.  His website is Understandingthethreat.com. 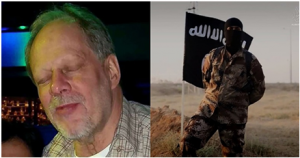 What About Las Vegas

Called the deadliest mass shooting committed by an individual in the United States, 58 people were murdered while attending a concert below the Mandalay Bay Hotel where the shooter, Stephen Paddock, allegedly had two rooms.  There are far too many questions related to this horrible Las Vegas attack, but one thing remains clear.

John Guandolo, clarified why the conclusion must be that the Islamic State was responsible.

The Las Vegas attack has disappeared from media.  The families who lost loved ones still do not know what really happened or why.  There are way too many questions that will never be answered by FBI investigators, who said they had found “no connection with an international terrorist group.”

All it takes is a match.  A magazine published by members of al Qaeda called for Western Muslims to wage war within the United States, urging them to engage in lone wolf attacks, including setting forest fires. According to ABC News, a May 2012 issue of Inspire magazine surfaced on jihadi forums with one article titled, “It Is of Your Freedom to Ignite a Firebomb,” which gives detailed instructions on how to build an “ember bomb” in a forest in the United States, and suggested Montana as a choice location due to the rapid population growth in forested areas.

California is dry as a desert bone right now, and forest fires are burning all over the southern part of the state.  Is ISIS involved?  Very well could be.

Do I believe the intelligence community knows what they’re doing regarding Islamist terrorism? I do not.

Do I believe our President has people knowledgeable of this threat in his administration?  I do not.

Do I believe we’re safe from future attacks?  I do not.

Do I believe Islam is a peaceful religion?  Hell no!

Do I believe the Islamic goal is Islamization of America?  I do.

Do I believe stealth jihad is the plan to overtake our country?  I do.

Do I believe there are voices of concern who are being heard?  Very few.

The one person who knew the dangers and how to solve them was destroyed by the intelligence community, and by globalist establishment insiders.  We need him back, and you all know who he is.